You are here: Home / Florence / That wasn’t so boring (part 2) – Video Renaissance

For a completely different family art experience in Florence – and a perfect way to cool off – check out the Bill Viola show at Palazzo Strozzi. It’s only on for two more weeks, closing on July 23rd.

Hang on, you say. Go to see contemporary video art? By an American (albeit with an Italian name)? In the city of the Renaissance? 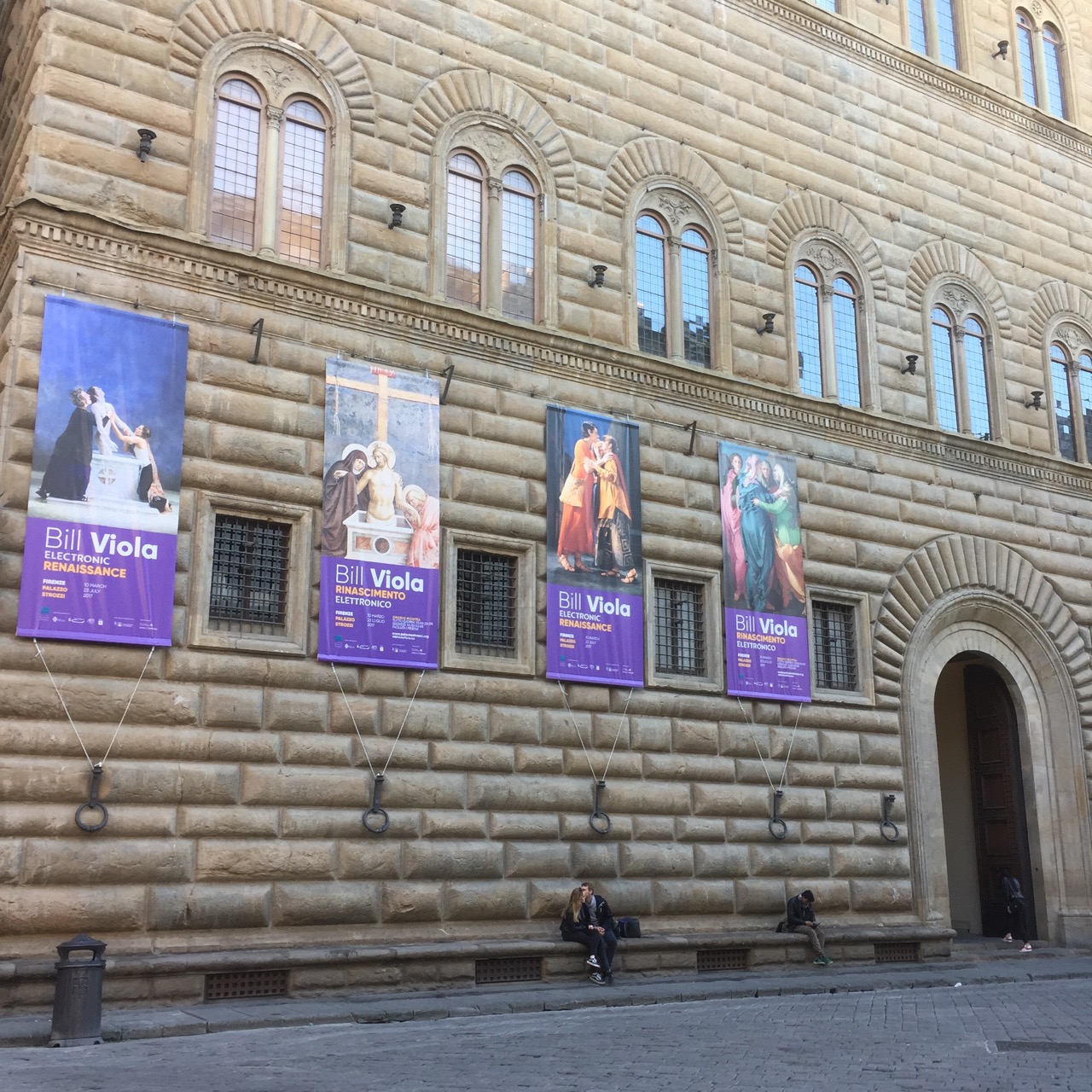 This is the 2nd in my series on visiting Florence’s cultural sights with kids. The 1st was on San Miniato al Monte up on the top of the hill.

Why visit an exhibition at the Strozzi?

This is a bag (beautifully made by local leather maker Il Bisonte) usually containing sketchbooks, pencils, props like a flashlight, and other elements to make kids think, invent, and explore the exhibition and the space. Each exhibition has a different kit but it’s always well thought-out and has a lot to offer (and which other Florence museums could really pay attention to). 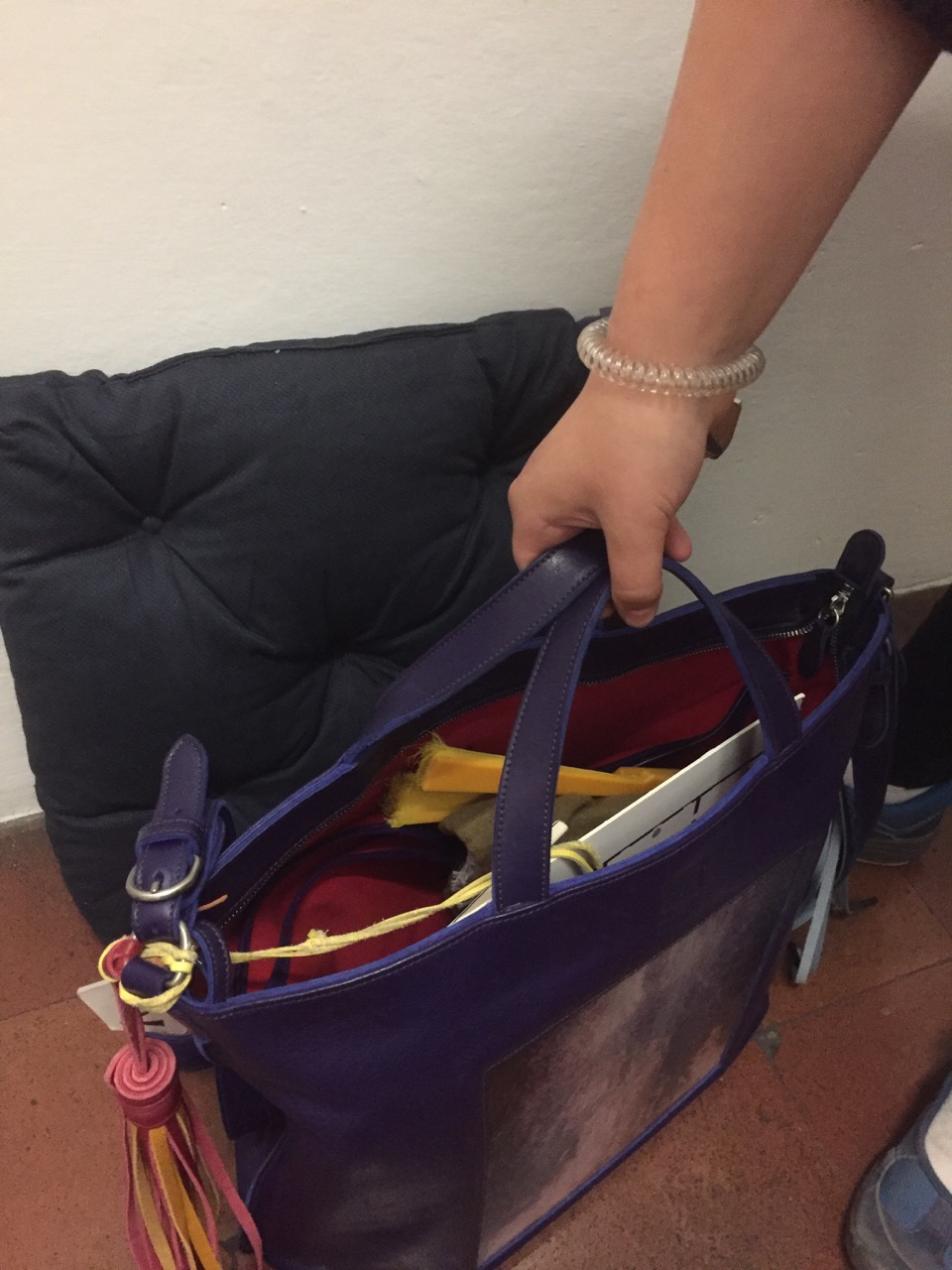 It’s meant for kids over 3 and the youngest can at least scribble with pencils and paper. There should be something for every age group in it. Boys and girls!

I’ll say it again, the kit is free! The kids might not use everything in it but it will be enough to let them see that they can find their own way into enjoying the art on show.

You can actually view the family kit guidebook on the Strozzi website. Useful before or after your visit.

There is also a “Drawing Kit” which the grownups can borrow, and view in advance on the site.

I’m an art history graduate, but video art has never been at the top of my list. Really… never. Typically at an exhibition you’ll find a video piece mixed in with paintings, sculptures, and other random pieces and when you encounter a video piece, maybe a projection in a tented-off corner, you have to make a conscious choice to stop and take the time to view it: for 3 minutes and 20 seconds, or, God forbid, 30 minutes! And with kids? It probably won’t have any kind of story and who knows what strange and scary images might appear.

But with how this exhibition was presented, I was really impressed by Bill Viola. What I learned here was how the elements of time and movement (and sound) are central to video art, making it a different but complementary art form.

Unlike so much fast-moving imagery that our kids see in animated movies and video games –where patience is not necessary, and parental hovering is often required – I love how a child who can get into this show will see and think about how the same medium, moving images, can be used in a completely different way.

Each room here contains just one artwork – typically the video piece along with its referring Renaissance painting.

The Family Kit made all the difference with slowing down our passage from room to room. As well as a notebook and pencils it had a fan to blow wind on your face, a flashlight, textiles to help you feel textures – to be used alongside the relevant artworks. 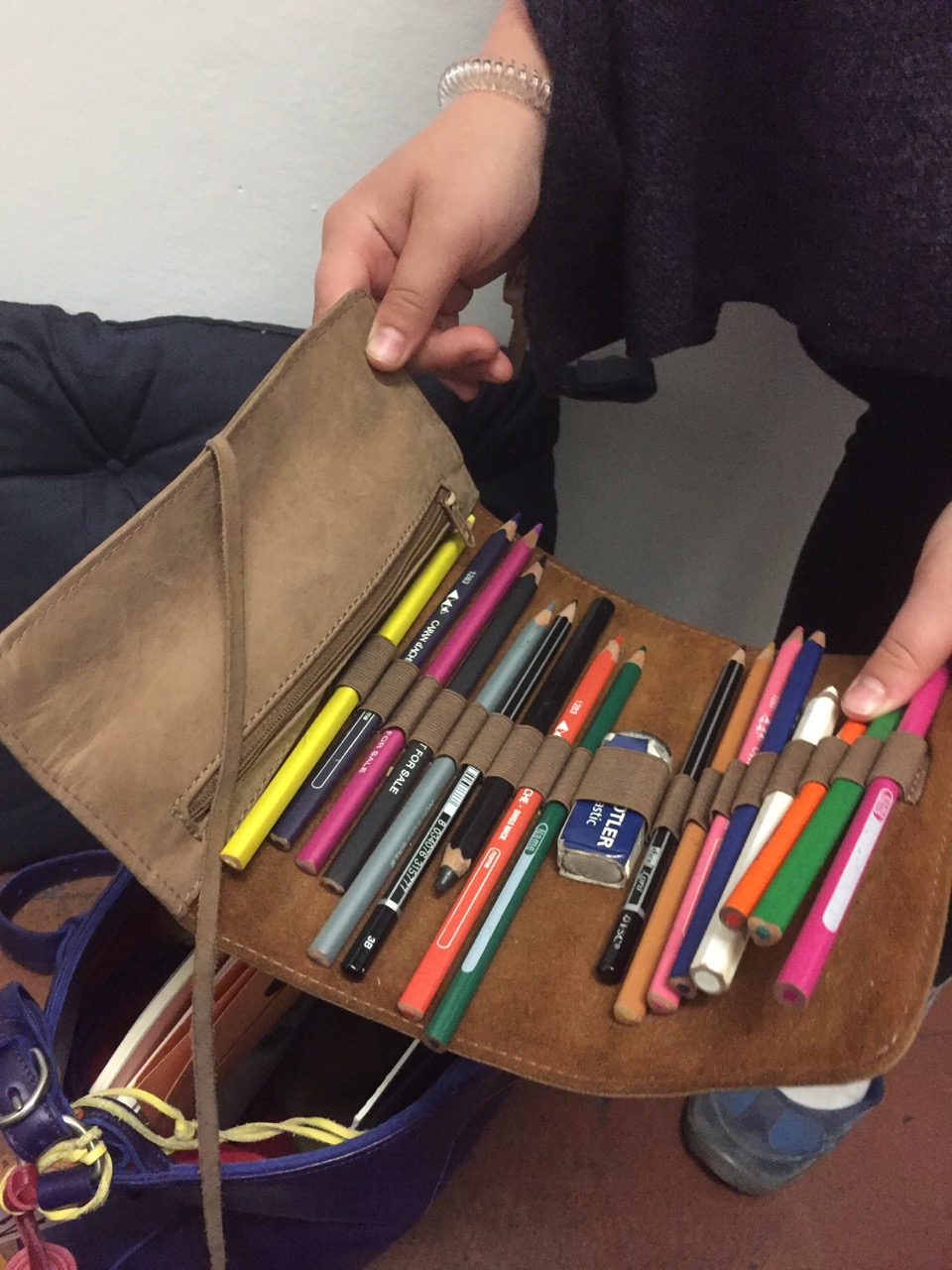 In the case of this show, I thought the images were all appropriate; there was no obvious violence or sexuality, and even though images included ideas like a person being engulfed by fire, my kids could see right away that it was of a different nature: a visual trick, or a different way of telling an idea. It was only after leaving the show that we noticed many of the figures were nude – but it seemed no more disconcerting that any number of paintings or sculptures at the Uffizi.

There is definitely a historical-religious element, not just the Christianity that is so central to Renaissance art, but other elements of spirituality and expression. You might need to explain or discuss some of the stories, but you’d be surprised what stories the kids have already picked up.

These are big life (and death) issues on show here, and not much that’s funny. But many kids will really relate to that and it can only make them think.

Disclaimer: my younger daughter (8) skipped through most of it with my husband, she was a little unnerved by the darkened rooms and slow-moving images. She had enjoyed the Ai WeiWei show.

Who is Bill Viola?

Bill Viola was born in New York to Italian parents. He lived for a few years in Florence in the 1970s and was involved in avant-garde video and performance art – like invading photos taken by tourists around town: an early photobomber.

Viola was also very taken by how images from the Renaissance permeate not just the museums but also churches, streets and houses. He gives the example of an old woman on his street who would leave flowers every day at a street corner altar with a Madonna, an act that had been happening for hundreds of years.

He’s one of the world’s leading video artist, is practically mainstream, and was described early on as an electronic painter. As I mentioned I’m not a video art fan but I found this work all so relevant to Florence, to our world, and very moving.

“He confronts death and the tragic anguish of life.. with projection rather than representation” – Anna Morettini, Director of Etrillard Foundation

The first thing the Viola show gets right is its size. 14 rooms are devoted to a few more than 14 pieces, making it easier to concentrate. It’s bared-down, simple and easy to see what the main focus should be and to move on. There are other pieces at locations around the city but the Strozzi is the main show.

The second thing is the concept – this show was built around Viola’s relationship to and inspiration from Renaissance art. And the inspiration, if not specific then at least stylistic, is placed in the room beside his piece.

The pictures below were taken by me with my iPhone – they’re like stills and cannot convey the movement and depth from experiencing the video in motion. But they give you a sense of the painterly quality of the works, how they give us room to discuss together how they related to the earlier paintings.

As Martin Holman in the Florentine says:  “Viola does not restage these older images. Instead he demonstrates what happens when they are absorbed and transformed in the mind”

If the kids follow the little guide in the kit, they’ll get a quick background to each work.

Here are the key pieces we enjoyed.

Viola’s piece recreates the meeting of the pregnant Mary with her cousin Elizabeth, slowing it down and making it even more ambiguous.

When he first saw Pontormo’s painting, Viola wondered what the artist had taken to create such colours.

The Family Kit includes a fan, to let you feel the breeze that you can visibly see in the video version. 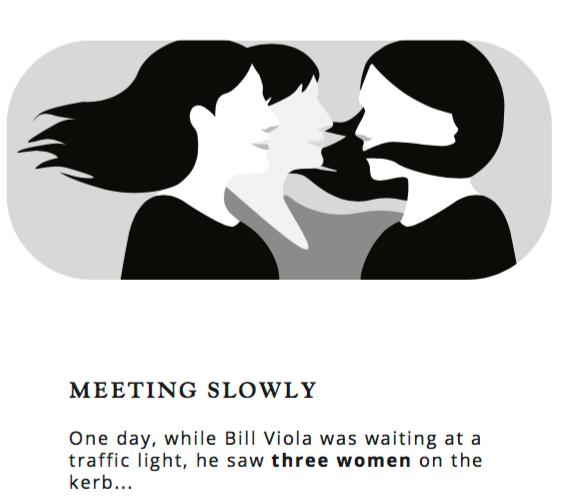 The room containing this meditation series is so lovely. Any child can see quickly the visual relationship between the 14th century St Catherine in the lower part of this painting by Andrea di Bartolo going through the motions of her day. In the four separate Viola videos, a woman is shown to us in her own private space, it could be a convent, or a prison, while the seasons changing outside the window.

These video pieces open themselves up in a way that painting or photography is not able to, offering another dimension into the subject or the atmosphere or the story around the story.

Talk about knowing the ending in advance. My daughter insisted on sitting out the full 30 minutes of this – watching the people and bustle around this building build up very slowly until the expected flood happened. The last 5 minutes or so did drag as the street and building dried off. But when you think about it, there’s nothing quite like sitting in a room with other people watching flickering images on a screen… 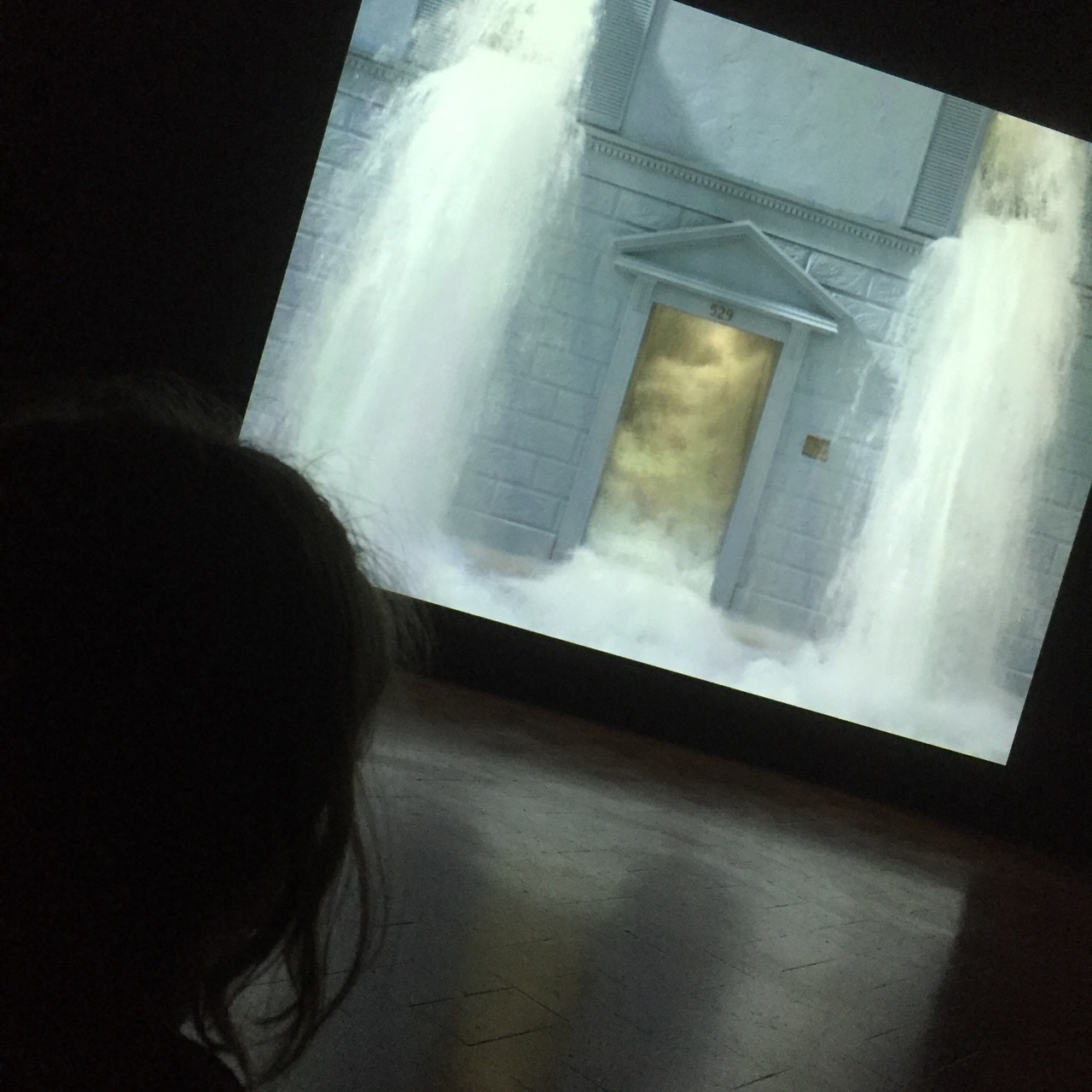 It was interesting to see Paolo Uccello’s wierd but much-loved Flood fresco juxtaposed against it. 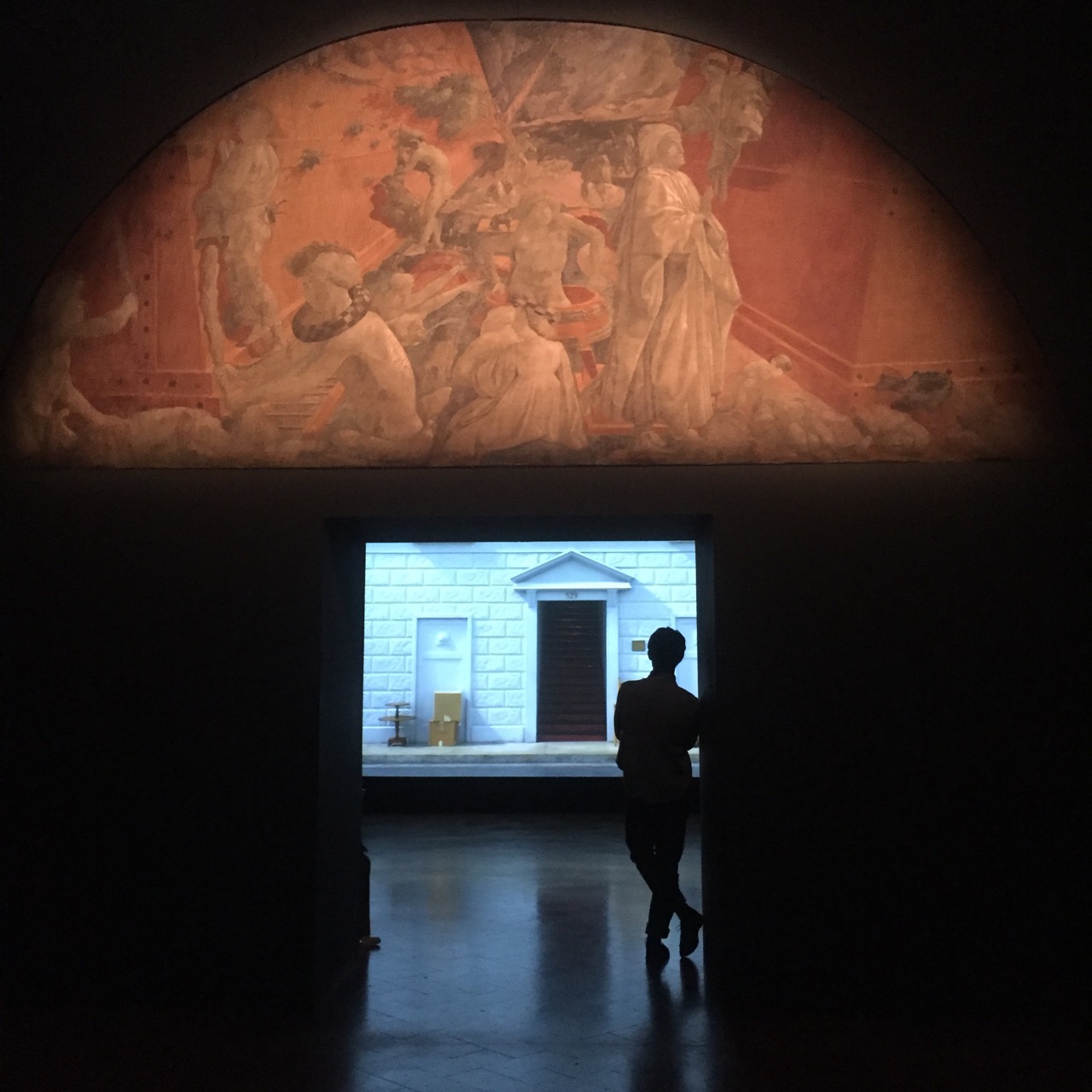 This is the exhibition’s “brand image”, seen on billboards, bus tickets and airport baggage carousels. 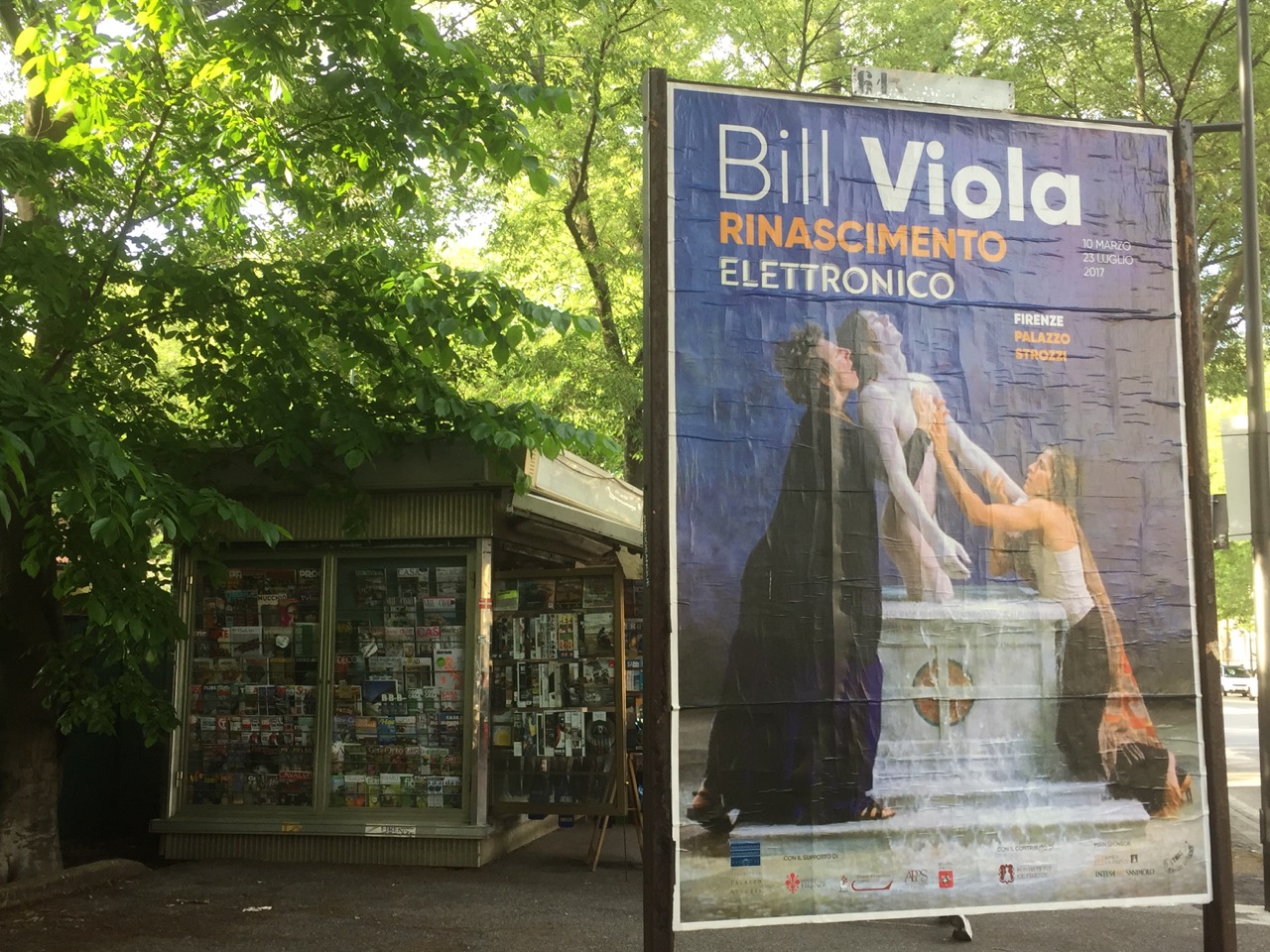 This may or may not be the lifeless body of Christ coming out of the tomb and then lowered to the ground by two emotional women. Or they could be midwives, present at a birth. My kids were mostly amazed by the colour of the man’s skin.

The slow-motion contortions and positions of the three persons move slowly into recognisable positions from well-known paintings – from Piero della Francesco to David’s Death of Marat. And we talked about how they seemed to dance.

I loved these pieces – first of all because the amazing Lucas Cranach paintings were right there on the wall (borrowed from the Prado) and are so very beautiful in themselves. And around the corner was Viola’s take: two single narrow vertical screens, one of a man and one of a woman, each of them individually evaluating their own mortality, the woman heading towards acceptance and happiness, the man fighting against his ageing body. One could say.

Just as the man and woman examine themselves with a light, a child visiting the exhibition can pull the flashlight out of the kit and do the same thing. 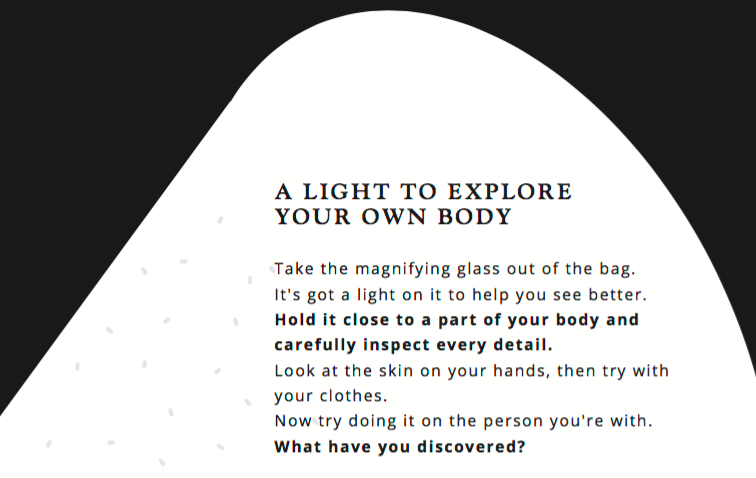 My daughter didn’t get into this exercise and, not surprisingly, preferred the younger and more perfect Adam and Eve.

When you read the description of these four pieces, placed on the four walls of one room like a Greek cross, they sound pretty gruesome. Each scene shows a person going through a movement through fire, air, water or earth. But my 10 year old and I were entranced by the four-sided elegiac flow of individual bodies going through what should be ordeals but which were almost a dance.

Kids will also enjoy the behind-the-scenes videos downstairs, which show some of the stunts, photography setup and studio “tricks” needed to create the flooded house or a submerged man. 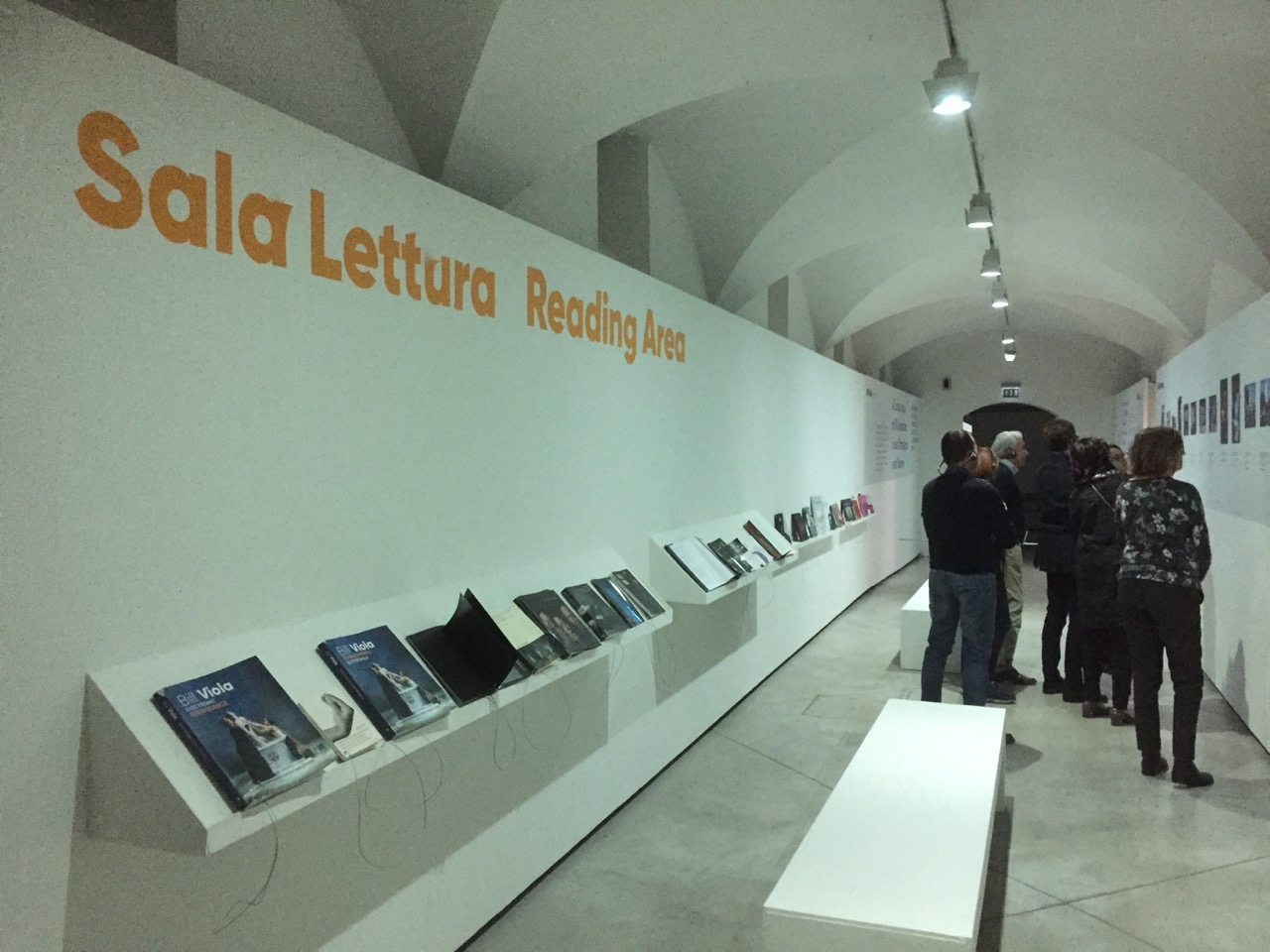 Not everyone in Florence wants to see contemporary art in such an historic city. But I say, bring it on! Those of us living here are happy to show our kids more of the world and of art than golden haloes and marble saints (wonderful as they are) and exhibitions like those put on by the Strozzi and this year’s Ytalia sculpture exhibition around town (upcoming blog post) offer something different.

The show was full of beauty, wonder at the human form and imagination, homage to many artists of the past (not just Renaissance) and an age-old questioning about man’s and woman’s place in the world and the wonder of life. I was also struck by the way women were portrayed in such a positive, human way.

And after all this life and death, you can’t go wrong with a nice cold sweet gelato!