You are here: Home / Archives for Library

The time has come for us to start weaning our children off the films that only they want to watch. In the age of Netflix it’s so easy to leave them to their  own devices, literally, and we have to make an effort to sit together and watch a film as a family: their dad and I are reliving our own glowing memories from childhood of enjoying films as a family together on the couch (including hiding behind it as Indy battles with the snakes).

So to start our plan to watch more interesting films, together, we started with Star Wars (it took a couple of goes but then they really took to the fantastical element of it and have now seen every film), Singin in the Rain (who doesn’t love Gene Kelly and Debbie Reynolds?) and then Back to the Future (lots of swearing and we had to explain what a Walkman is).

But we needed a good adventure film, with spies and suspense and action. My own favourite is North by Northwest – so we thought we’d start with that. We’re unapologetically old-school and we like watching a physical movie on the TV screen, so before going jumping onto Amazon to buy a copy I thought I’d try the library. Yes, very old-school. 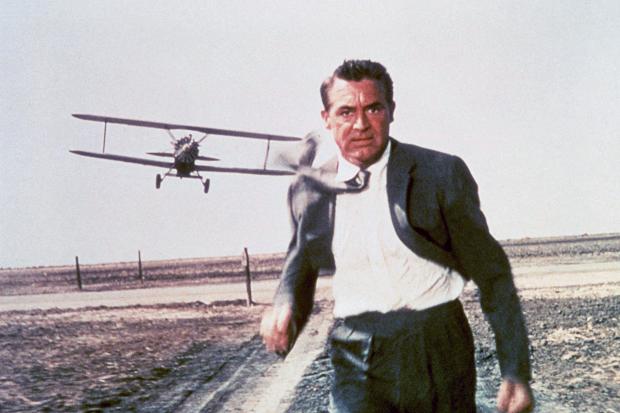 Over our years of living in foreign countries, we’ve become experts on making the most of the library system wherever we are, especially for browsing films. This goes back to our time in New York (around 1999-2002) when we lived close to the fabulous Brooklyn Public Library. We would indulge in raiding their film catalogue, scanning each shelf at a time and carting home our tote bag laden down with a few brick-like VHS tapes, many of which then refused to work that Saturday night. But we enjoyed catching up on some random choices like Powell & Pressburger and Kurosawa, and watching anything with music by Michel Legrand or hair by Veronica Lake. We were also lucky during our 7 years in Oslo to live close to the central library there (the grandly named Deichmanske Bibliotek) and had lots of cinema to choose from, though the foreign-language films often had no English subtitles so we no doubt missed out on a few years’s worth of Brazilian and Hong Kong blockbusters.

So here I am now looking for the 1959 Hitchcock classic to watch with our kids and I head to our local library in Fiesole – it’s a small town and we’re lucky to have a library. It actually has a decent selection of classic and modern films on DVD, and still some VHS. Because there are surely some Tuscan households that still use one.

I start to browse through the DVDs for North by Northwest. I look for the letter N in the titles. No joy, the titles are all a bit jumbled and not shelved according to any alphabet I know. I look to see if they might be organised by genre, or then by country – Italian vs non-Italian. Still no luck.

I interrupt the librarian at her desk, she looks up and smiles (as they do the world over). “How are your DVDs organised?” And she answers, “Oh they’re shelved according to director”.

Of course they are. This is after all the nation of cinema lovers: Italians take their cinema extremely seriously and worship their filmmakers as much as their Renaissance artists. Who wouldn’t know their Pasolini from their Fellini, or even their Spielberg from their Scorsese? Fair enough, I’ve actually studied some of this stuff myself and I can find them on these shelves.

But when it comes to more popular movies, what do you do? What about all those mindless action movies, sequels, random 1970s family movies? Could you name the director of any Bond movie or the auteur behind Frozen?

Still, I have an easy one and I find the Hitchcock selection.  Here’s a nice range of his titles, but they’ve changed all the names! (I’m sure they didn’t do that in Norway.) But these do sound quite nice in Italian: “I 39 Scalini” (The 39 Steps) and “Rebecca, La Prima Moglie” (the first wife). But no sign of Cary Grant in his immaculate suit. I do take home the Man who Knew Too Much (which proved to be a bit spookier than I’d remembered, Hitch uses lack of music to great effect). 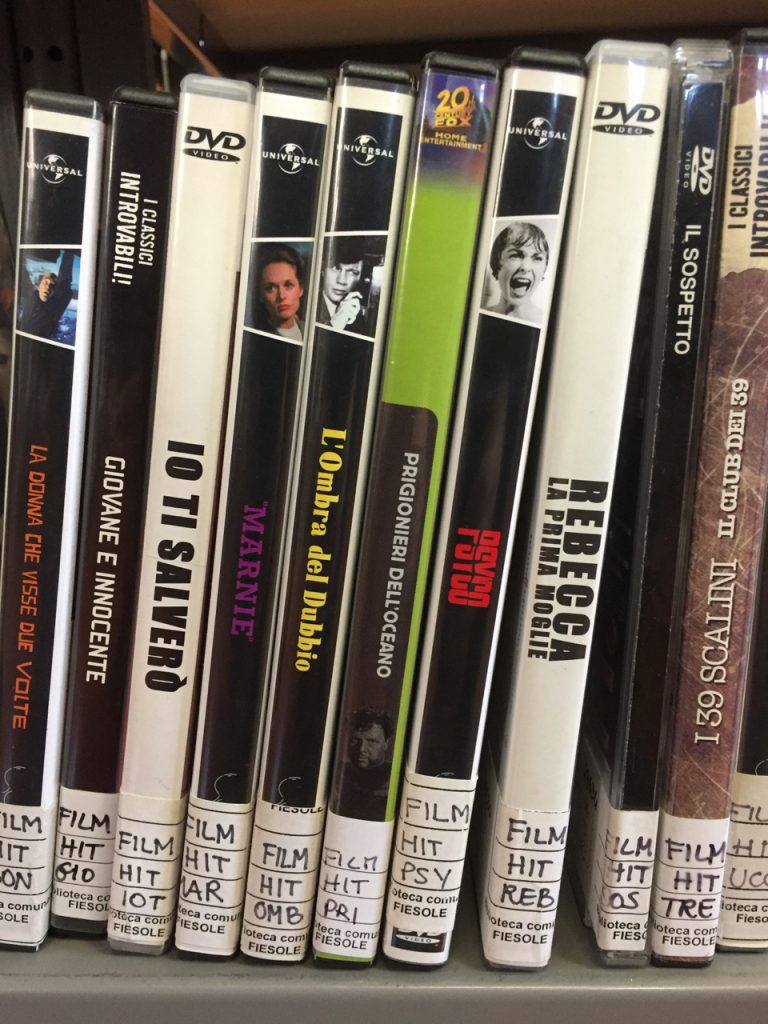 With no luck at this library I check the central library in Florence next time I’m in the centre of town. It’s a relatively-recent library, in a lovely renovated old convent. But the contents are a different story. Their cinema section proves to be less organised than our own up here and it’s clear they get a lot more customers, or at least ones who have DVD-players equipped with steel teeth. The films are here organised differently: by title. Heimat sits between Harold & Maude and Heat. Who makes these decisions? Who knows?

The DVDs are shoved downwards into pull-out shelves and you have to make an effort to look through them. Still, I stumble on some fun titles I wouldn’t otherwise see, like this collection of four Jacques Tati films (which has about half the contents intact): 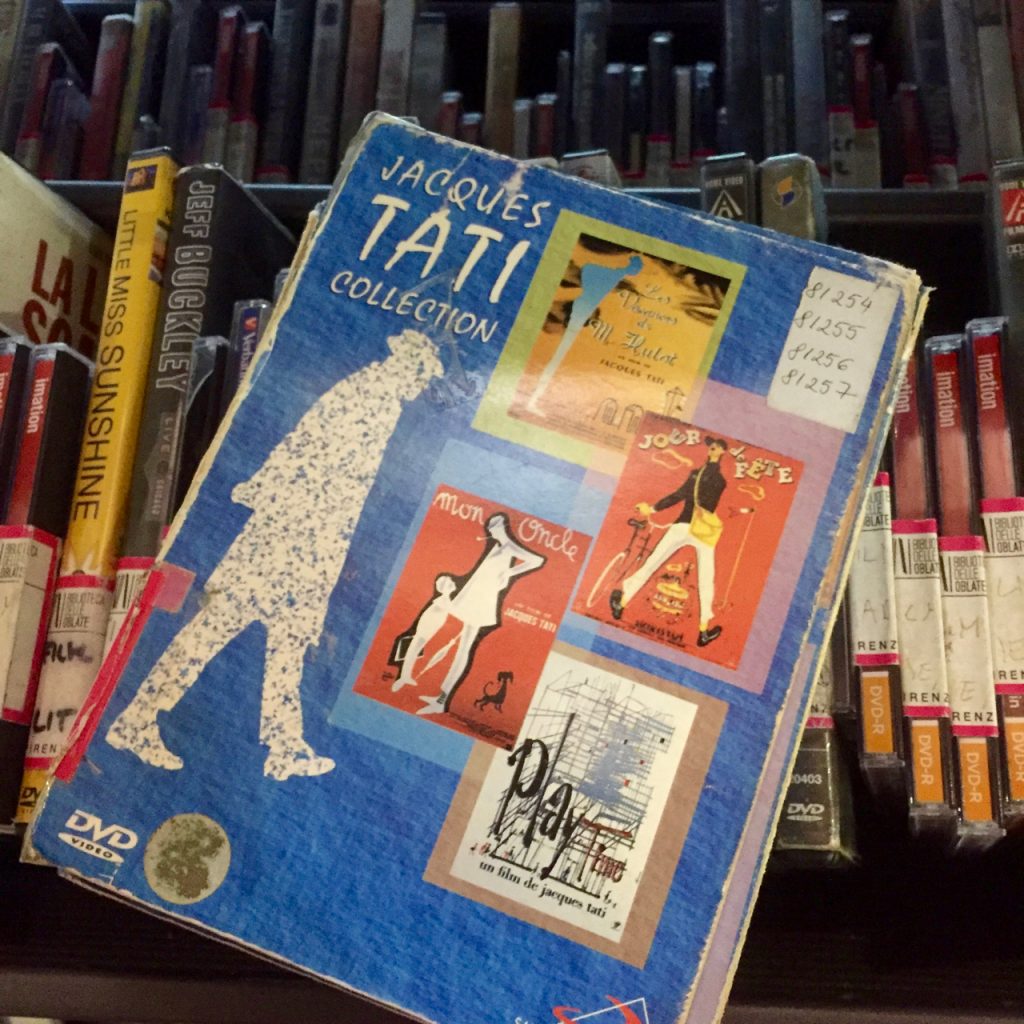 But still no North by Northwest and then I realise – of course they’ve changed the name of that one too! Taking out my phone I cobble onto the sickly Wi-Fi offered by the library and discover online that I should actually be looking for “Intrigo Internazionale” – International Intrigue. (Which is odd, as the film doesn’t go much further than South Dakota.) They don’t have it, but at least now I’m armed with more information. 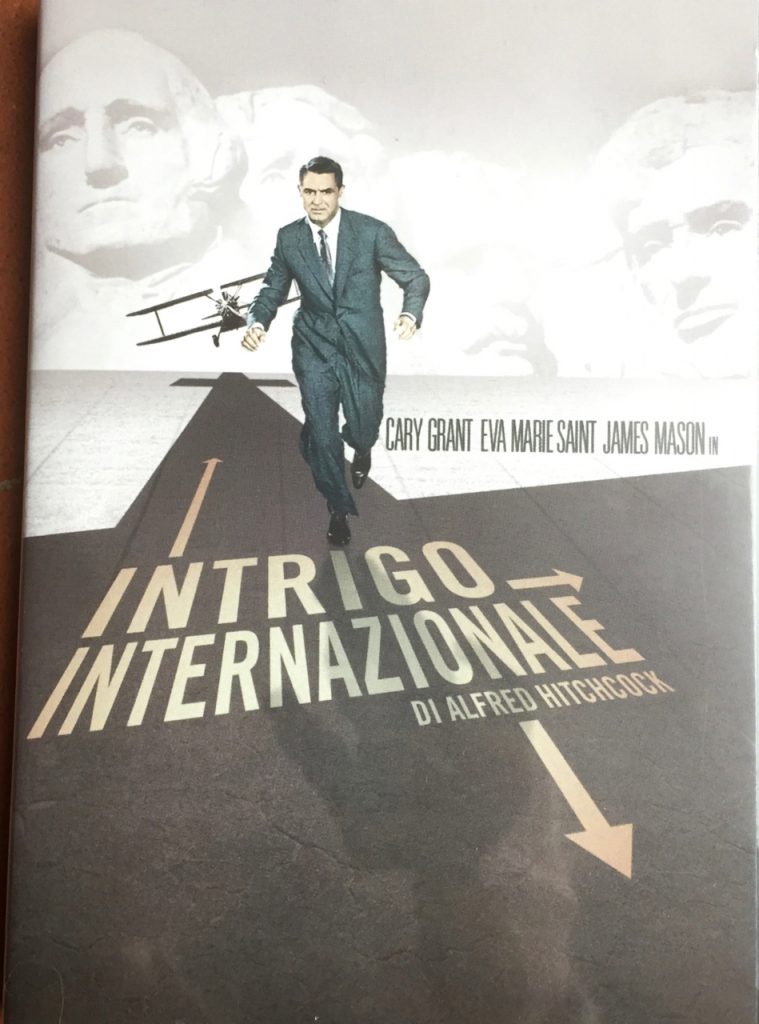 In the end I find the movie in the Feltrinelli bookshop near the Duomo – they have a cheap DVD section upstairs. For 8 euros we can keep it all to ourselves and build up our own little library at home. And sort them however we like.

P.S. The kids really enjoyed it and had loads of questions about it afterwards, mostly about guns and kisses.