You are here: Home / Archives for Vaccinations

I’ve been scrabbling through old boxes of folders and files, the ones that hold the history of my little family’s health through the years of our peripatetic life. Having moved to a new country three times in as many years, you would think that I – the mother – would have kept tidy the folder of “important family paperwork”.

Never mind the kids’ artwork and sports medals, what I really need to find quickly is their vaccination records. I finally find the random bits of clipped together, each one showing a list of dates, signatures and stamps from doctors and nurses who administered these life-saving injections into the thick skin of my precious babies’ legs and arms.

It seemed a lot simpler for my own mum who would just reach up the bookshelf in the front room of the Dublin house that is still the family home. In the back of her Doctor Spock book she recorded all our vaccinations, episodes of mumps and those other pesky poxes we used to get back in the 1970s.

The first of my own daughters was born 12 years ago in Ontario, Canada, but we moved around to two other provinces in eastern Canada during the first two years of her life. Childhood vaccinations in Canada are done at 2, 4, 6 and 18 months and so her yellow record card has tracked all her different visits, from health clinics in three towns thousands of miles apart from each other. The names and locations of these clinics mark the course of our lives over those two years, triggering memories of places explored, friends made, dinners shared, winters survived. This card is our only record of her early vaccinations – as each province had a slightly different schedule (see below). What’s even more amazing is that I’ve managed to hang onto it. 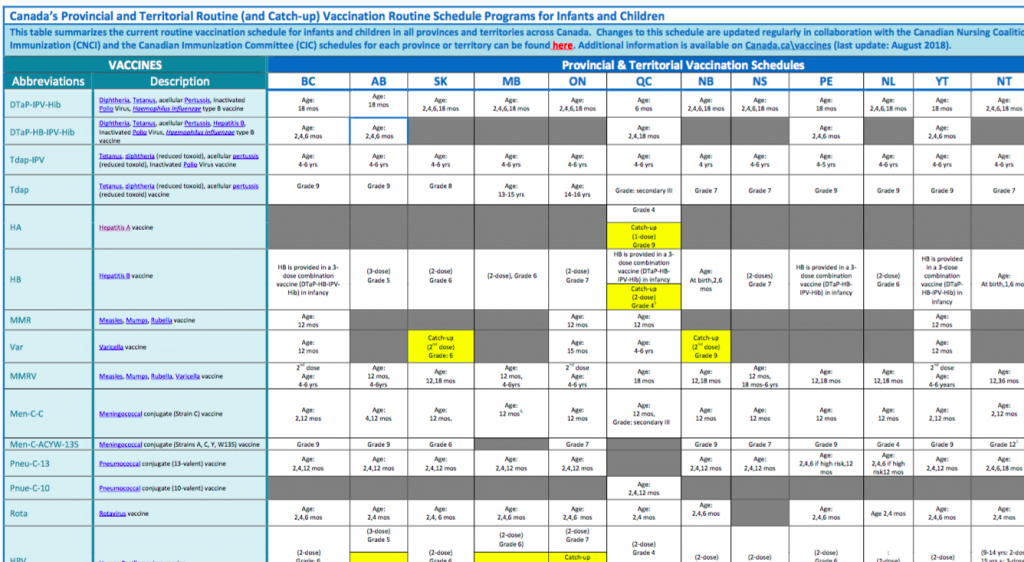 I don’t remember much from each of her injections, she was a tough baby, except for the last one, in New Brunswick, where I remember being generally fascinated with our impressive, charming GP who was mother to 17-year-old quadruplets: two boys and two girls, the girls becoming our (interchangeable) babysitters.

A few years later we moved to Norway and our younger daughter was born there. Naturally enough, as a country that often tops the top-everything lists, they’re big into public vaccinations. That was totally fine with me. For some reason they run on a different timeframe:  6 weeks, then 3, 5, 12 and 15 months but that wasn’t a problem as we (thankfully) didn’t go anywhere during those years. Not until she was 7 years old and we moved to Italy.

Now, this kid isn’t as tough as her big sister.

A year into our new life in Tuscany we learned there was a local outbreak of meningitis; a nugget of information I might have missed if I didn’t regularly read the local paper, or keep in with other international mums on Facebook. After checking Norway’s vaccination schedule online, and having my old GP there email me our records, I realised that she had never been vaccinated against Meningitis: a slight panic ensued.

Her big sister had had it done, as it’s part of the Canadian schedule at age one. It’s also done in Ireland and the UK – these being of interest as we might plan to move there some day, and I was starting to realise I needed to have all this straight in my head. Our GP in Florence – who we trusted and could easily talk to – advised us to go ahead and get the vaccine done. It wouldn’t be complicated, she said.

This meant I had to order the meningitis vaccine through the village pharmacy, and with so many anxious Tuscan parents doing the same, this took a couple of weeks. Once it came in and I had handed over 90 euro (the one time I’ve had to pay for any of this), I physically carried the vial that contained minute traces of this vile disease which was already killing off several young people around Tuscany up the stairs to the GP’s office next door. The pharmacist had looked at me blankly when I asked for the skin-numbing plaster which had saved this baby many tears for earlier needles. Turns out that was a purely Norwegian invention, and in Italy this was going to be done old-style. 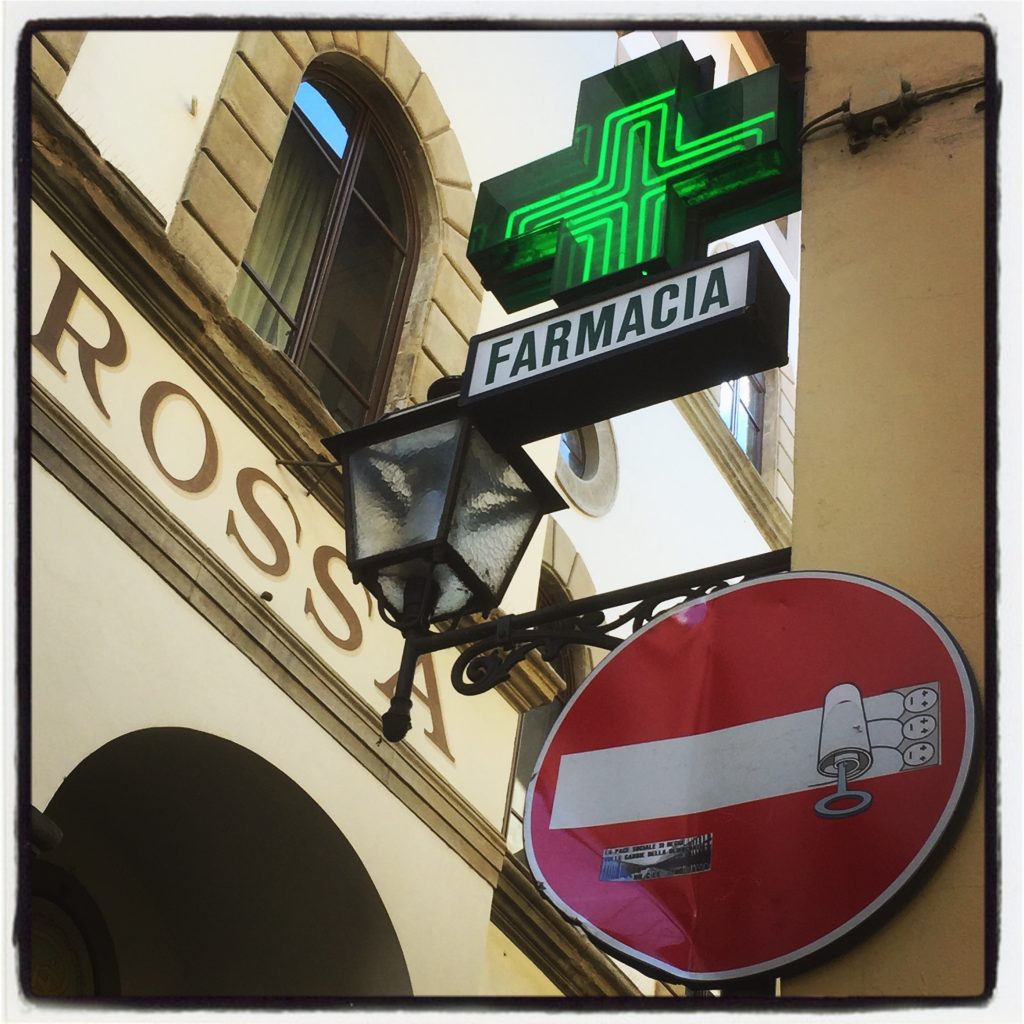 We were the last appointment of the day and being the kind-hearted village doctor she was, la Dottoressa was well past schedule. Her kindness quota already used up, she quickly got tired of waiting for my needle-shy daughter to bare her upper arm. She cajoled and smiled and argued with her until she finally enlightened her in accented English that “if you don’t get this injection you could get a horrible disease which can make your ears fall off”. My daughter was so surprised, the point of the needle slid quietly in, but the tears when they came, were ever greater.

In the car driving home, my girl was untypically quiet. “Mummy, can we please not move country again and not have to get any more needles we missed from last time?”

So now, in 2018 we’re living in Ireland. I gather together all these records and memories to share them with our local health clinic. Hoping that the girls are both on track and haven’t missed out on some major public health issue their peers are already immune to.

Our older baby – who charmed all those Canadian doctors – is now in secondary school. As in many countries, she is getting her HPV vaccine – an amazing, potentially life-saving injection that didn’t even exist when I left Ireland as a young woman 20 years ago. This is not the year to imagine the reality of any woman getting cervical cancer in Ireland, after the scandal of the faulty cervical check programme brought to light a few months ago by some amazing women who are dying of it, and partners of women who already have.

For myself I’ll admit that I’m grateful that my own women’s health issues have been dealt with outside Ireland. And now that my daughter is at the beginning of her journey with women’s health, I’m not going to pass up the chance of her getting a vaccine that has been proven safe and able to reduce the risks of getting this cancer later in life. In an atmosphere of trust misplaced and betrayed I have to take a leap of faith that this is the right step, better prevention than cure (or in current cases) even diagnosis.

If you’re interested, or you’ve lost track of your own vaccination records, there’s a fantastic tool to compare the schedules of different European countries.