You are here: Home / Language / The songs on the bus go round and round

It’s a mid-winter Wednesday afternoon and we sit on the top deck of the 46a bus in Dublin, the bus route of my teenage years. I’m here with my two girls on one of our regular visits back to family.

The bus is quiet so my six year old decides to sing – what else but the theme song from Frozen. (You’ve heard it before.) She sings it once through. And then she sings it again, in Norwegian – a version the good people of Dun Laoghaire are strangely surprised to hear, and to be honest, not so excited about. Much as the song is hated by parents and bus-riders the world over, you have to admire the under-7 urge to belt it out in any language:

I was quite surprised when she came home from kindergarten last Autumn with this version in her repertoire. And then I was even more amazed to discover it was localized to 41 languages – the song (and film) is the most widely-translated yet by Disney who took pride in the mammoth task of finding local singers to tackle the wide vocal range of the original song, correct lipsynching, and transcreating the song’s admittedly rather complex lyrics to local meaning. The variations in titles alone hint at some serious cultural variations, from ”I Will Rise at Dawn” to ”I Have this Power” to ”It has Happened”.  The multi-language ”behind the scenes” version on YouTube is inspiring millions of multi-lingual divas. 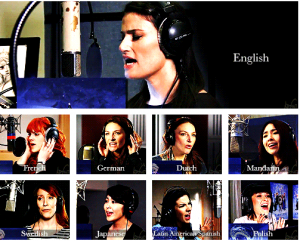 There has been some debate about the choice of languages – European languages being more in evidence than African or Indian. It is worth considering if 5 ”versions” for Scandinavia does balance against hundreds of sub-Saharan languages which would reach many many more viewers.

An interesting take by an Arabic scholar bemoans the strange backwards step taken by Disney in choosing Modern Standard Arabic rather than contemporary or Egyptian Arabic as used in other films. This version is actually closer to Classical Arabic and the results sound like – “I dread not all that shall be said! Discharge the storm clouds! The snow instigateth not lugubriosity within me…”

Growing up in Norway my kids have so far learned English songs and Norwegian songs, and they don’t often overlap – some notable exceptions being Old McDonald or Fader Jakob/Freres Jacques (which for some reason we confusingly sing in French unless you grow up in North America). And here was a full-on local version of this oversung song which many children might think was the version. All over the world.

When I first moved to Norway I heard kids on the bus (not many, they tend to keep pretty quiet here) singing their own approximated versions of the song of the day, Mamma Mia – indeed that was a ”Swedish” song I learnt when I was little. And sure, I’m all for hearing good Norwegian pop songs being sung or even hits Kardemomme By.

The prevalence of English songs in other countries is a big issue, I’ll save that for another day. But for now let’s just enjoy anyone who wants to sing and sing and sing.

** 2019 update: a reader of the blog has informed me that her father was actually the Norwegian lyricist!

About Wash your Language

I’d love to help you polish your English! I offer web copywriting and editing as well as translation from Norwegian to English and Italian to English. Read more.