You are here: Home / Uncategorized / Our First Irish Panto

“Ya eejit!”. So says my eight-year old to anyone she can, whenever she can, since she heard it at the Rapunzel pantomime last week at the Gaiety. This was our first ever family trip to the panto and our knowledge of Irish culture has now shifted up a notch. I’m a Dubliner and I’m sure I went a few times as a child, as you did. But my husband’s non Irish and our two kids have only lived abroad – until this summer, when we moved to Dublin to give it a go, and although we’ve usually come for Christmas we’ve never had time to do the panto before. 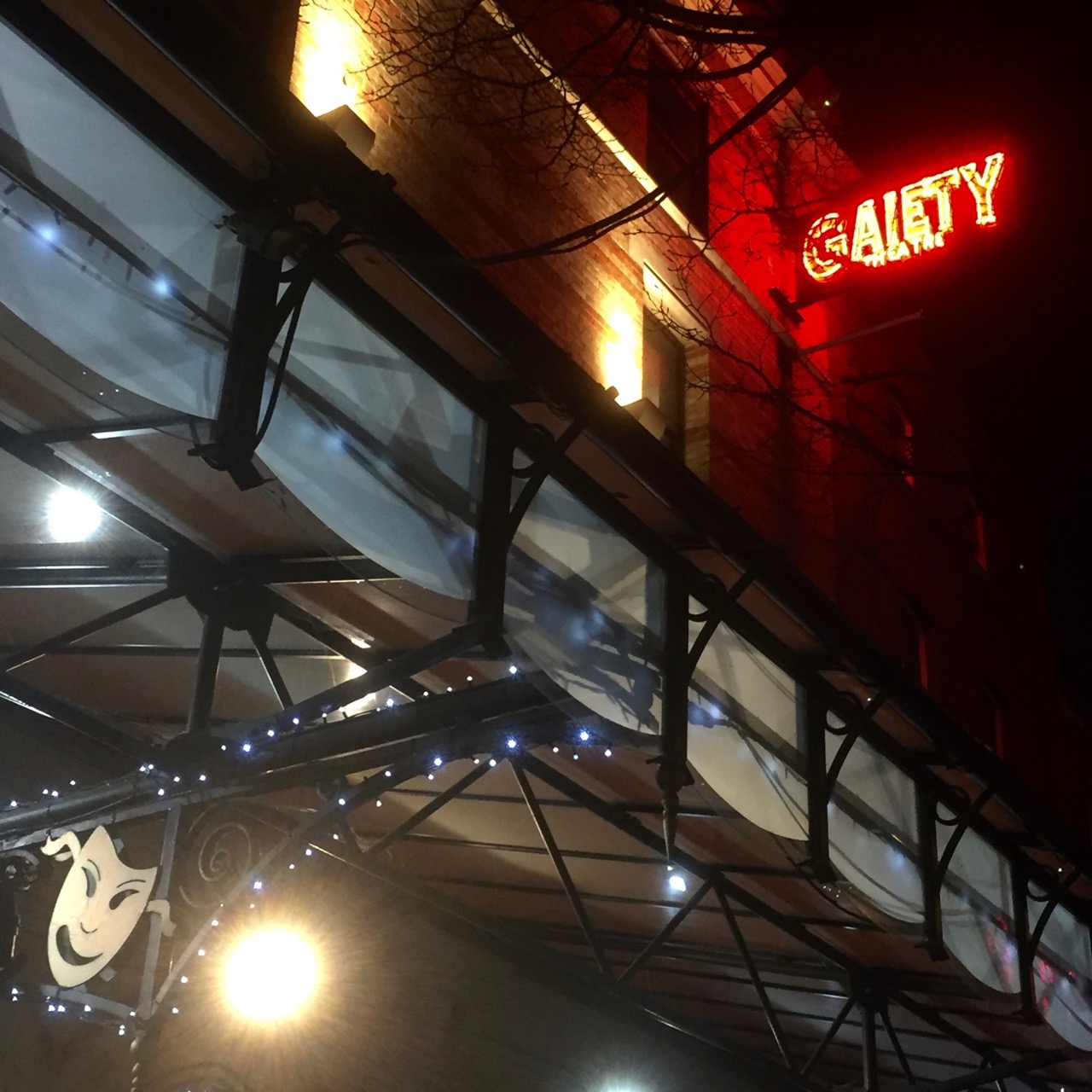 About five minutes in, a throwaway remark from the blue-eye-shadowed King allows me, and the rest of the crowd, to let loose with our first “oh no he’s not”. “Shhh”, says my youngest, and on my other side, her father gives me a look. “You’re supposed to do that”, I tell them

Within five minutes they’re at it too, and soon the girls’ faces are glowing some more, fitting in with all the other expectant faces around the balconies and stalls, going with the flow, the silliness and shouting “boo!” to the witch and “oh yes they are!” and by the end of the two-plus hours they’re happily singing and dancing (as do all the mums and dads). “Is that a man?” they ask about the fabulous, wig-and-multiple-skirts-wearing leading dame, Ninny Nanny Noonah, having no idea that this same actor, Joe Conlon, has been playing more or less the same role, with just different lines, for the last 28 years. During the course of this “drama” involving metres of hair, air-guitar-playing heroes, dopey country fellas, a drunken pub scene and farting rabbits, I have to translate a few Dublin expressions that are new to my family: “have some grub”, “like a Fair City kidnap plot” and “Scarleh I was”.

High up in the second balcony (indeed, last minute tickets) we get a top-down view over the satisfied audience, of the terrific band working hard in the pit, the dancers waiting in the wings, and a head-on view of the family of eight in the balcony across the way who are all wearing Santa hats and jumpers, sharing with them the relief of not sitting in the front rows where you get sprayed by water and have your hairstyle publicly insulted. 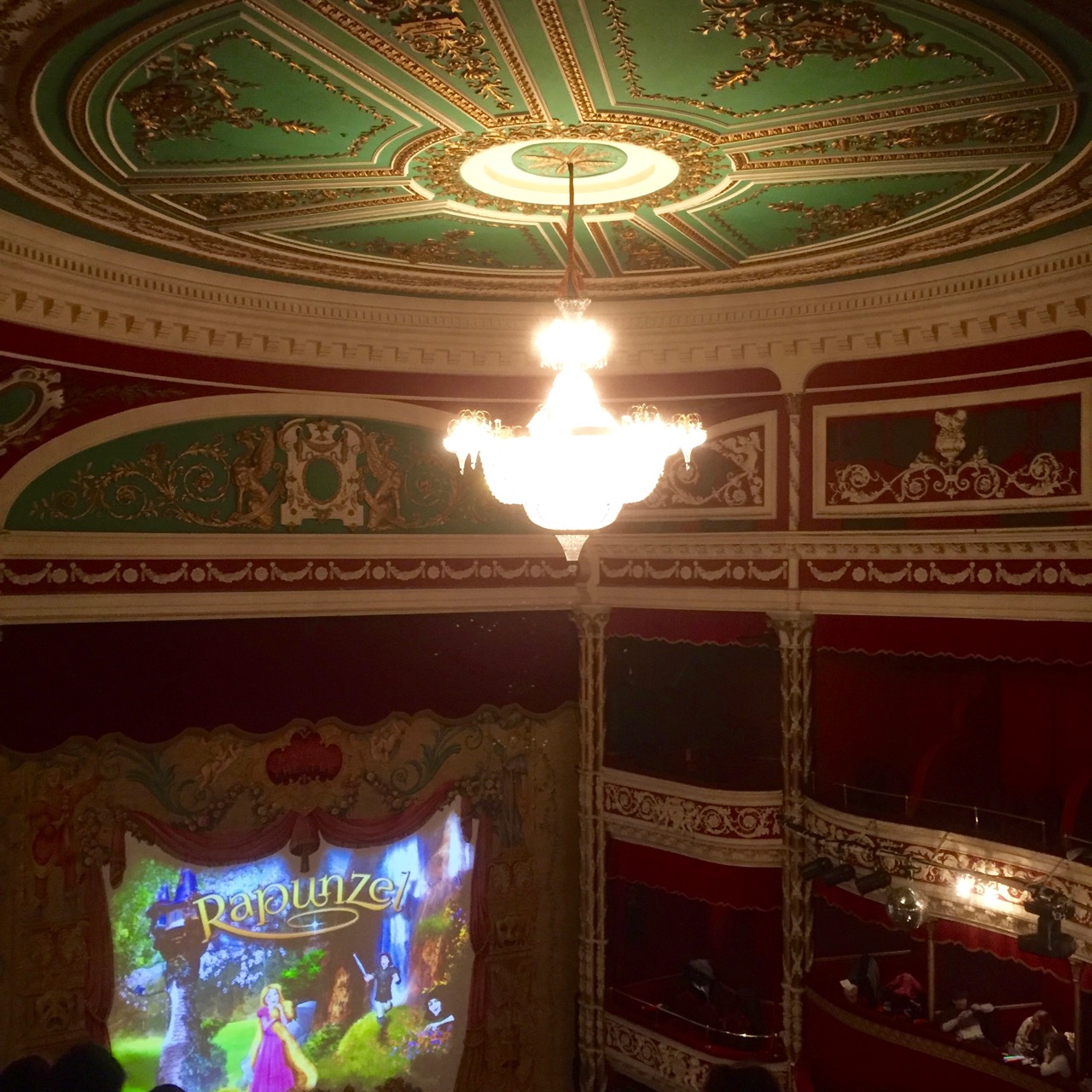 During the interval I encourage the kids to explore the nooks and crannies of this beloved old theatre, to peek over the other balconies, look at the old programmes up and down those dark wooden staircases, buy something from the bar beside the glittering Christmas tree. “Sure you might as well get the big popcorn”, says the nice woman behind the bar, telling them to enjoy their first panto. She tells me she has four kids of her own, in their teens and twenties. One of them has a little boy, just 10 months old: “he’s so gorgeous, he just doesn’t know how much joy he brings into our lives”.

As for my husband (who’ll go to see a Shakespeare play at the drop of a hat) he was dead impressed by the Gaiety and his first panto: all that singing and dancing and embarrassment and joking that says nothing more complicated than “we will entertain you”. And that’s what all those hard-working people up on the stage of gaiety did for us.

Our eldest girl is so impressed that she wants to go around the back to the stage door off Grafton Street and try to meet some of the actors. We join one other family huddling in the alley and after about ten minutes she gets to greet the two younger stars, Ciara Lyons and Johnny Ward; I don’t think we’d recognise the older stalwarts out of makeup and costumes. We’re not really sure how famous they are but they were great, and they autograph our programme and give words of encouragement for her own now-bolstered dreams of the stage. Next to the alley entrance there is a street soup-kitchen, popped up in place for the night once the shops were closed. Needy customers loiter and chat, and the volunteers, dressed in yellow vests, do their darndest to make their evening a bit better. One volunteer comes over to our girls as they’re waiting at the stage door – would they like a hot chocolate? They decline politely, they know who the hot drinks are meant to be for. The woman insists: “they have marshmallows in them”. In their party dresses they are actually freezing so they gratefully accept, and in the two minutes it takes for her to come back with the steaming milky cups, they’ve grown up a bit more. A surprised volunteer takes the few bob I offer him, and we feel very lucky to head off to our warm bus and our warm home, having learnt a bit more about the realities of a Dublin Christmas.

This story was published in the Irish Times on December 26th.