You are here: Home / Italy / The meaning of snow

It’s been snowing for a few days up here in the hills above Florence – delicately, sometimes with fat flakes that you can catch in your mouth. There’s not enough to stick to the ground and local life is only slightly disrupted, some people who live further out in the countryside are actually snowed in and can’t get to school. But there isn’t much panic, just patient tolerance as it surely won’t last. As veterans of hard winters we are charmed and I have to stop myself from stopping the car to take another photo of an olive tree blanketed in white. I learn the term “bufera di neve” which sounds soft and gentle but which I’m surprised to learn means blizzard. Tuscan-style.

Our 7-year-old attends a Montessori school in the woods and on Monday we meet the other kids at the start of the day, it’s slowly becoming whiter around us. One of the dads brings up that old chestnut, about how Eskimos have 40 different words for snow. “Which makes sense”, he says, “think of all the different types of snow there are”. And we do think about it: the stuff that falls out of the sky, sometimes fat, sometimes fast. The hard-packed stuff and the stuff that’s almost too fluffy to hold onto, the stuff for moving through and the stuff that has to be dug out of your way to get anywhere, the blowy blustery stuff and the snow you can use to build something, sled or ski through. 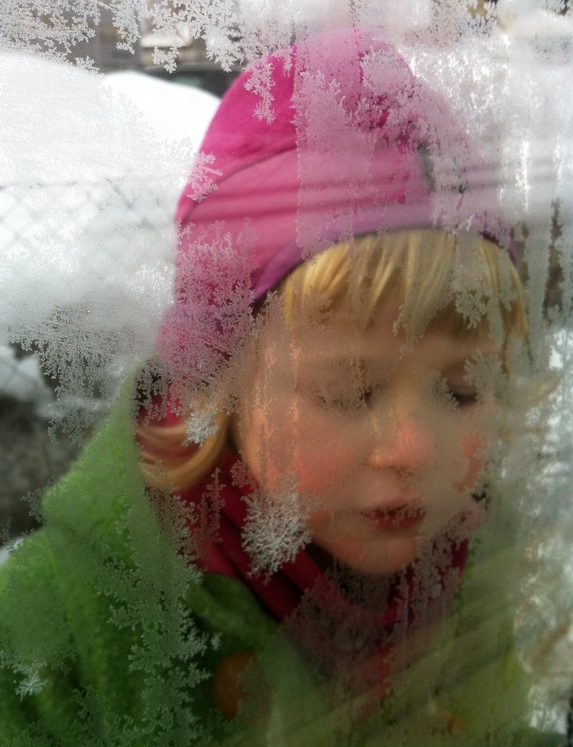 My daughter is indeed a child of snow. During the hours before she was born, to ease the labour pains I walked and walked, (yes I was tough) through the historic cemetery close to our Oslo home. It was snowing hard, the air was dampened and our (good) boots stomped tracks through the soft powder, past the graves of Munch and Ibsen and the WWII resistance fighters, feeling strangely comforted to walk among these old souls. Within a few hours we got to meet our own little Norwegian.

A few years later we walked through the same graveyard every day to her nature kindergarten, which brought the children into the woods outside the city 3 days a week. Over her 2 years with that group, this tough girl clocked up many hours of trekking through snow, sledding down hills, chopping wood, building shelters, a latrine and obstacle courses in the trees. In all weathers. She knows more about snow than I ever will.

I didn’t grow up with snow in Dublin and have only as an adult come to know and respect it. By marrying a Canadian I made a serious lifestyle choice which was further compounded by living for several years in eastern Canada and then, when we started raising our kids in Norway. But there we took it on as a part of life which affected almost every aspect of daily life 4-6 months of the year.

And here we are now in the woods outside Florence, looking at this almost foreign-looking snow falling through the tall Roman pines, we almost crave it as it’s been so long since we’ve seen it. The kids open their mouths and catch the fat flakes when they see them, they’re transported with delight. A week before it snowed near us, my daughter’s friend who lives deep in the country arrived at school one morning with a cloth bag around her neck. She produced from the bag, very carefully, a glass jar. Opening it up she proudly showed us a mushy mess and declared “Snow from my garden!”

Now I watch my daughter listening intently to the young Italian dad discussing the eskimos and I realise I’m disappointed to think that her deep, deep connection to this cold white stuff in its many forms and shapes and surroundings and uses and receptacles of emotion is limited to just one word. In English we just call it snow, and in Oslo, we used the very Norwegian-sounding word snø though if you dig deeper there other words available.

And what about this whole 40 Eskimo words thing? It’s an idea that has stuck with people but it’s basically not true, a linguistic misconception and a more complex issue which I can only suggest you read up on it. Similar ideas that circulate include there being numerous Irish words for rain. In fact I just read last week in the local paper – and this was of great interest to the dad – about the dozens of  phrases for “it’s bloody cold” in Tuscan towns and villages.

I watch my girl stick out her tongue to catch another flake and run off down the road towards the school with her classmates and teachers. And I know that she and I know that words don’t really matter so much. It’s the feelings and the memories that stick. 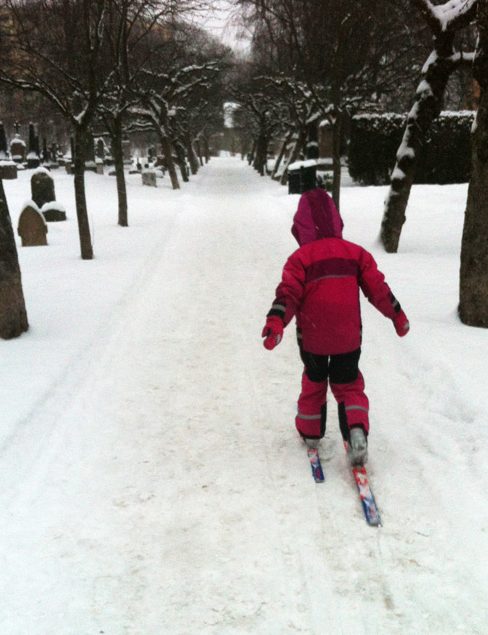