You are here: Home / Italy / There’s something about Elba

What do you know about the island of Elba? Probably that it’s where Napoleon was exiled and has some nice beaches. Anything else? Well, after a trip there both this summer and a couple of years ago I can gladly tell you that it’s a summer paradise. You might not have known that it’s actually in Tuscany, just off the mainland and one of the most popular holiday spots for the good citizens of Siena, Florence and Pisa. My article in July’s Florentine magazine tells how my own little family went from being beach novices to experts thanks to our first visit to Elba. But I also long to visit in the spring or autumn and enjoy more of the nature, less of the visitors.

Less fancy than the Amalfi coast and quieter than the holiday towns along the Tuscan coast, Elba is a jewel of an island. The waters are clear, with few unwelcome sea creatures, the light is strong and beautiful as it reaches the different types of landscapes. Even though it’s just an hour-long ferry ride from Piombino, it can feel a world away. Some areas have restricted development and many of the villages retain their old atmosphere. 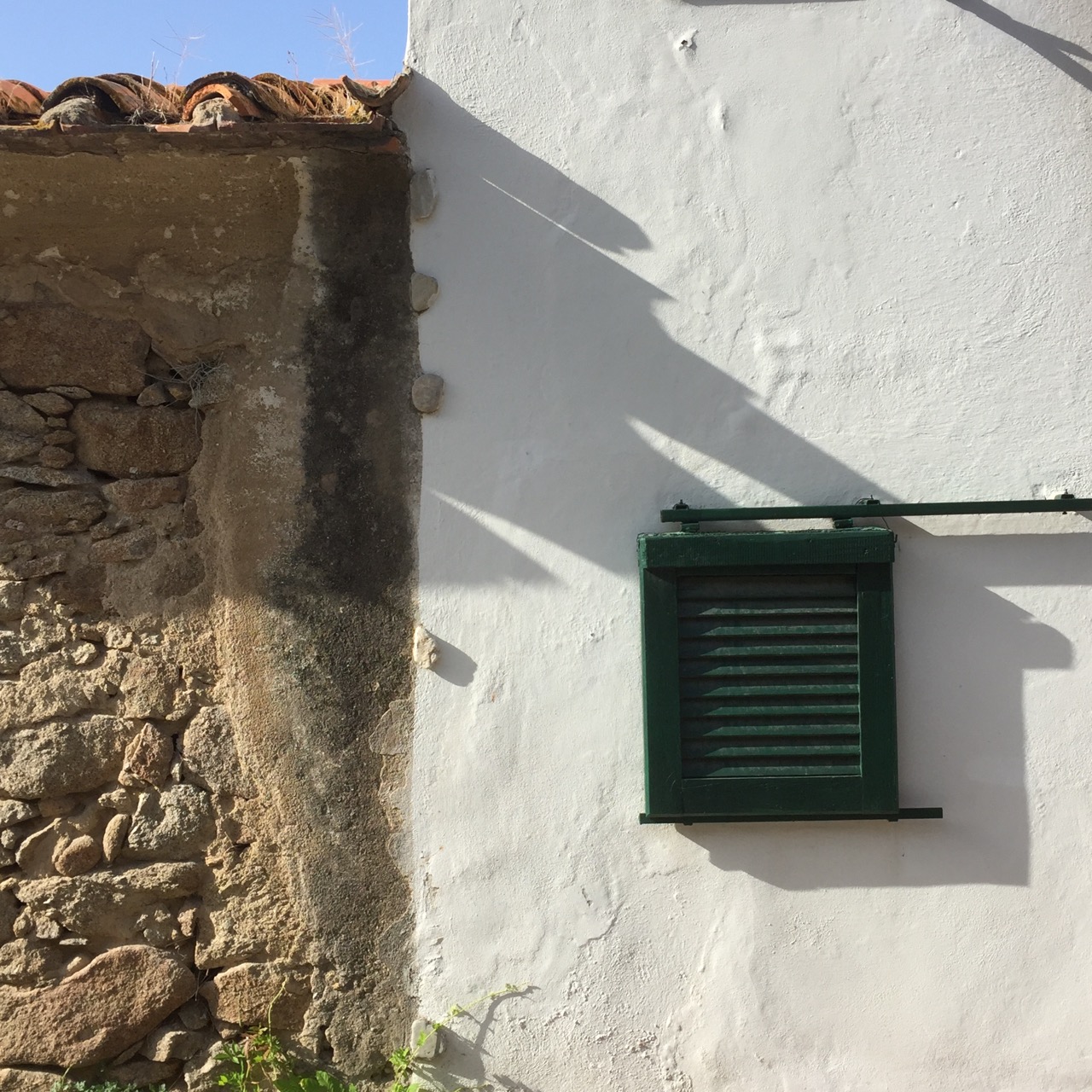 Elba is actually the 3rd largest island in Italy after Sicily and Sardinia and it’s part of the “Tuscan archipelago”, a national park of seven islands. It’s quite cool to spot just over the water the tiny islands of Montecristo (not easy to visit) and Giglio (car-free, beautiful beaches and now famous for the crash of the Costa Concordia in 2012).

As well as arriving by ferry you can fly here (on very tiny planes) from Florence, Pisa, Milan and (oddly) Switzerland – which will explain why staff in shops and restaurants often start speaking to you in German.

Elba is all blue sea and beaches along the edge and hills on the inside. It doesn’t take more than an hour or so to drive all the way around it. Generally, the western part of the island is quieter, less developed and retains more atmosphere in its villages. Traditionally an agricultural and mining centre, the island started being developed in the 1950s, when the main coastal road was first built. The busier areas are in the centre and eastern parts, around the main towns of Portoferraio, Procchio and Cavo. The big resort beaches (and noisier night-time towns) are Marina di Campo, Lacona, Fetovaia and Porto Azzurro.

Elba’s coastal road winds around many edges of hills and it can be hair-raising for novice drivers not used to Italian driving styles. There are bus services but it’s easier to get around with your own car. Plenty of cyclists seem to enjoy the length and condition of the roads and there are many hiking trails. And as for water-based activities, well lucky you if you have your own yacht! But there are plenty of options for hiring kayaks, diving gear and all sorts of one-day trips.

Elba might not offer the same insane abundance of artistic heritage found in the rest of Tuscany, but it has plenty of history – Etruscan, Roman, Medieval, Napoleonic – and some interesting archaeological sites and museums, churches and other spots to explore. The towns are worth spending time in and not just for picking up some beach towels at the markets. Here are a few we’ve enjoyed, away from the beach towns. Bear in mind that you often need to park just outside the centre and walk up, and that the lunch hour (between 1 and 4pm) seems to be strictly enforced.

Marciana Alta is the older, sister town of the seaside spot of Marciana Marina on the north shore. It’s a real Tuscan hilltown with a ridiculously-long history (founded in 32 BC), charming narrow streets, cute boutiques and it has a particularly nice terrace lined with cafes overlooking a fabulous view down to the sea. Follow the road up above to the fortress where they do archery and falconry demonstrations in summer. And if you take the main hike down from the top of Monte Capanne (see below) you’ll end up in the back streets of the town. Not far away is the even cuter town of Poggio.

This handsome town dominates the southeastern part of the island and is a very pleasant stop for lunch and shopping. It also has one of the only theatres on the island (which doubles as a cinema) that hosts some interesting festivals. I really liked the dedication written on the outside wall: “to the Elbans around the world”. 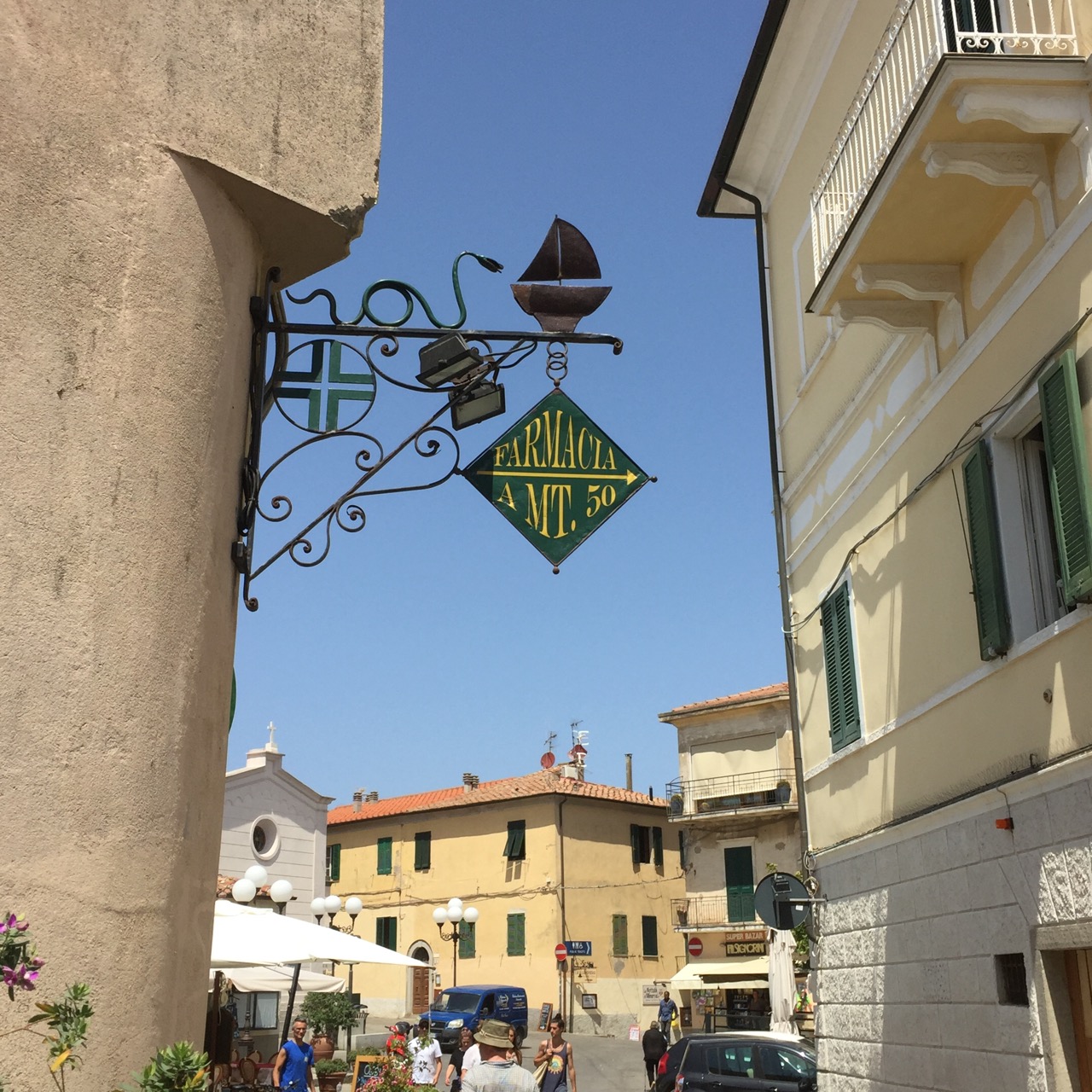 Pomonte on the west coast is a small village with lots of its old features, and it has all the basics (butcher, market, cafes, excellent pizzeria) and it’s a good location near the popular beaches of Fetovaia, Chiessi and Cavoli.

It also offers a shipwreck beach, called Ogliera. Look out for the crowd of diving boats gathered around the spot of a 1972 wreck, or you can swim the few hundred metres from the beach and touch the boat at 12 metres deep. More info here.

With my stubborn Celtic skin and historic curiosity, I am not a natural beach person but Elba’s 40 or so beaches offer such a wonderful variety – sandy to rocky, very-public to almost-hidden – that it’s hard to resist them. It can be smart to ask the locals for their recommendations as some of the best ones are reached only by boat or by leaving your car on the upper road.

All the beaches are free: even if some seem to be taken over by umbrellas and bars, the strip right at the water is free and you will find even a very small public section. Have a look at my Florentine beach article for tips on how Italian beaches work.

Often overlooked for more popular beaches along the north shore, this beach right in the town of Procchio is perfectly nice and great for small kids. In between the bagni (sectioned-off areas) after the sailing club there is a good-sized public beach. The water is clean and shallow and you could easily forget the world during an afternoon here.

When driving south along the coast road between Cavoli and Marina di Campo, park the car along the edge where others are parked and down another small road to the right you’ll find some paved steps down to this small but lovely and quiet beach. There are a lot of steps down but unlike other off-the-track beaches, this path really is easy and doesn’t involve brambles, confusion, and a steep uneven path that might put off some kids.

When you get thirsty on Elba you can spend money on bottled water from the corner shop. Or you can do like the locals and fill up at the local water source – and some of the fresh spring water here is wonderful. To find the closest fonte, ask the locals or just keep an eye out for cars parked randomly along the road (and people carrying bags of empty plastic bottles).

This is the fountain just outside of Marciana Alta, heading towards the fortress. 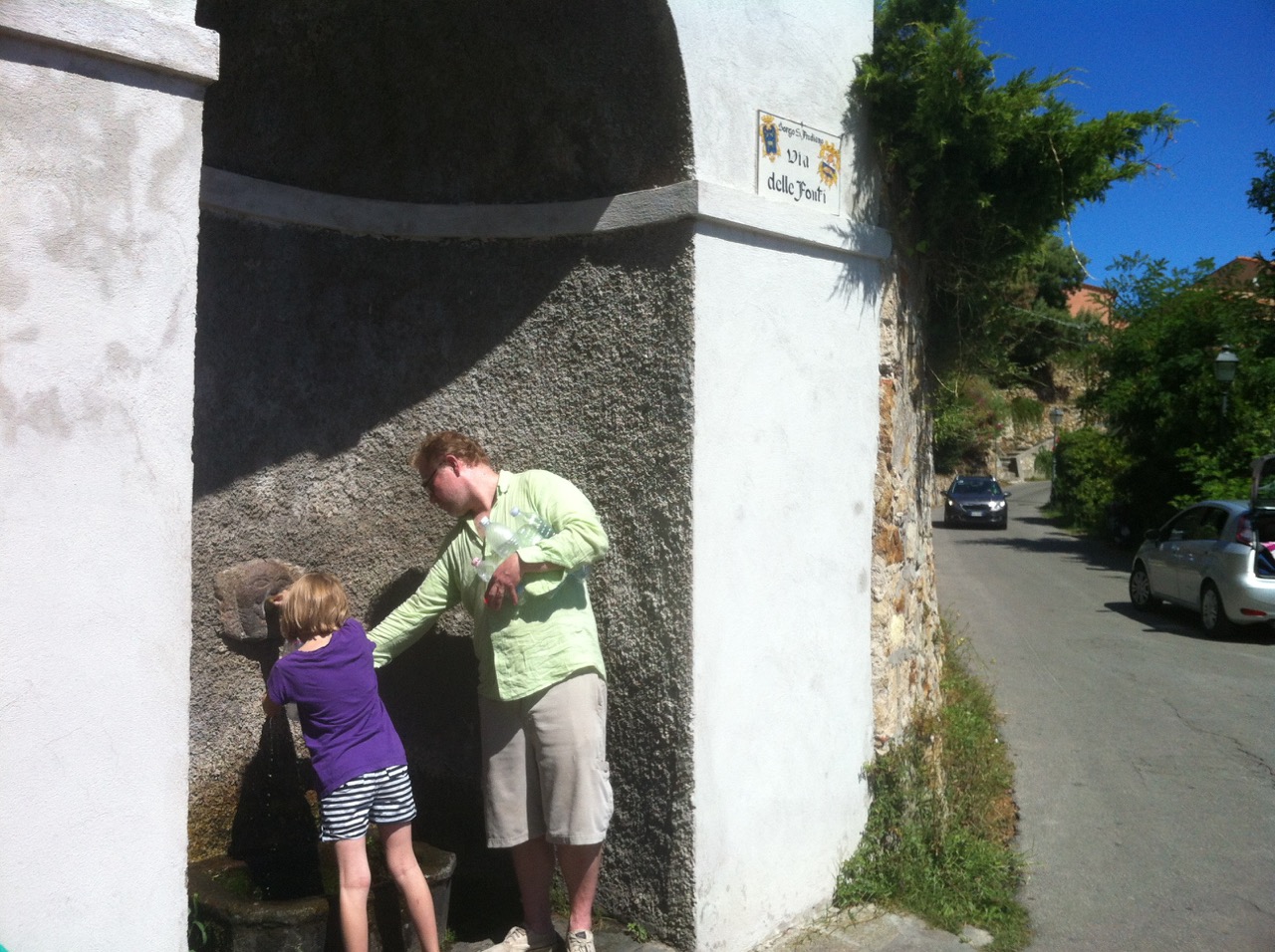 Some of the fountains are nicely-decorated, like this one down a path near the pizzeria in Pomonte. 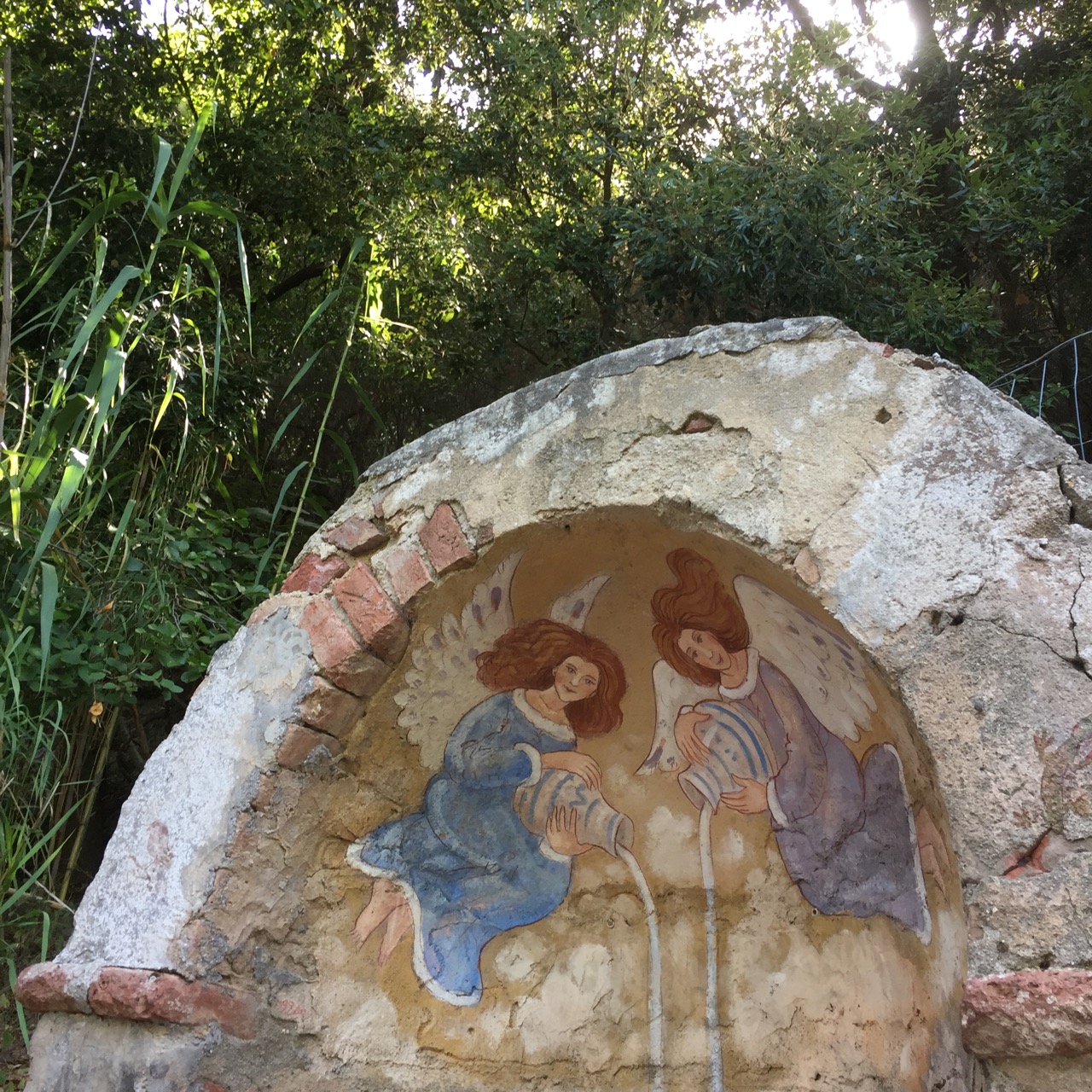 There are tons of trails for beginner and serious walkers, there’s an excellent list on the InfoElba website.

With friends and kids we tackled Monte Capanne which is – at 1,019 metres – the highest point on Elba. The easiest day out would be to take the cableway up and down, but we decided to take it up and then hike back down. With our bunch of kids and hot temperatures it took about 3 hours, but it felt great at the end and was definitely one of the summer’s best-earned ice-creams.

Here’s a link to the cableway/cabinovia which is a standing-only version of a cable car. It’s not for the very faint-hearted and the 8 year olds in our group were nervous as they dangled high up over the mountain, but they were very proud of themselves once they’d gone through the experience.

The French emperor – born in Corsica, just over the water from here – was indeed exiled on Elba in 1814, the island having been under French possession since 1801. For the 300 cushy-sounding days he spent here, he lived in this beautiful villa, with a chosen guard of 600 men, and essentially acted as governor of the island. He did a lot of economic and social reforms for the locals (long before the hotel industry took off 150 years later), and is fondly remembered all over the island through statues, cafe names and an annual commemoration and parade in May.

Napoleon’s villa is near Procchio and though it is, unsurprisingly, quite rundown, it’s worth visiting for its location and to get a sense of the life he might have led here (and the Demidoff family who lived in the villa later on). Napoleon escaped from Elba, caused more havoc back in France and Waterloo and was eventually exiled more effectively to Saint Helena in the south Atlantic, expiring there in 1821. 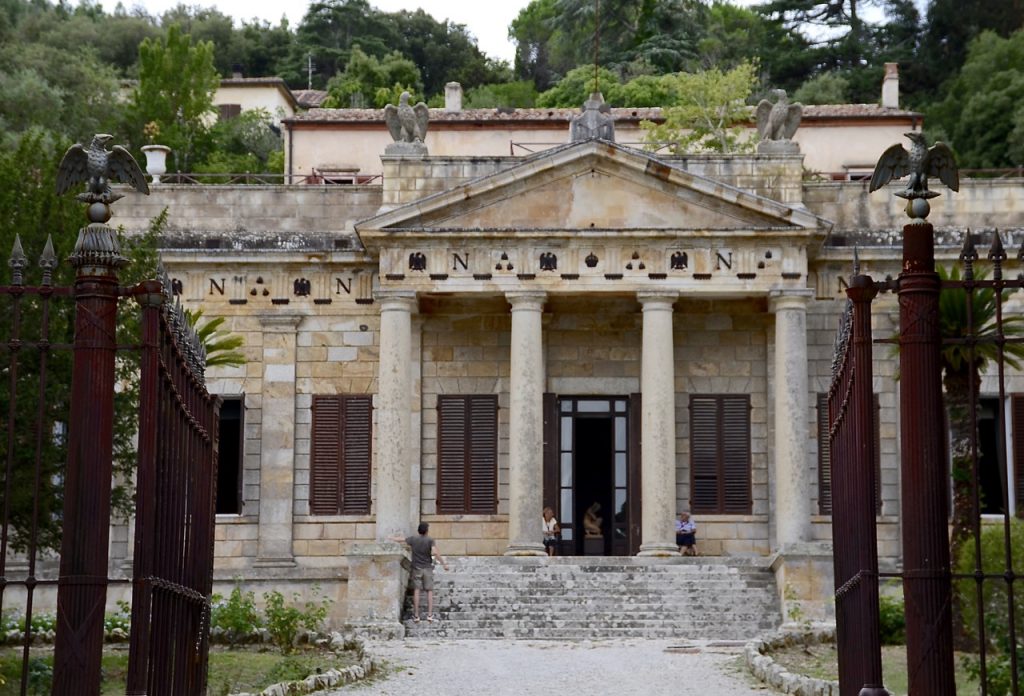 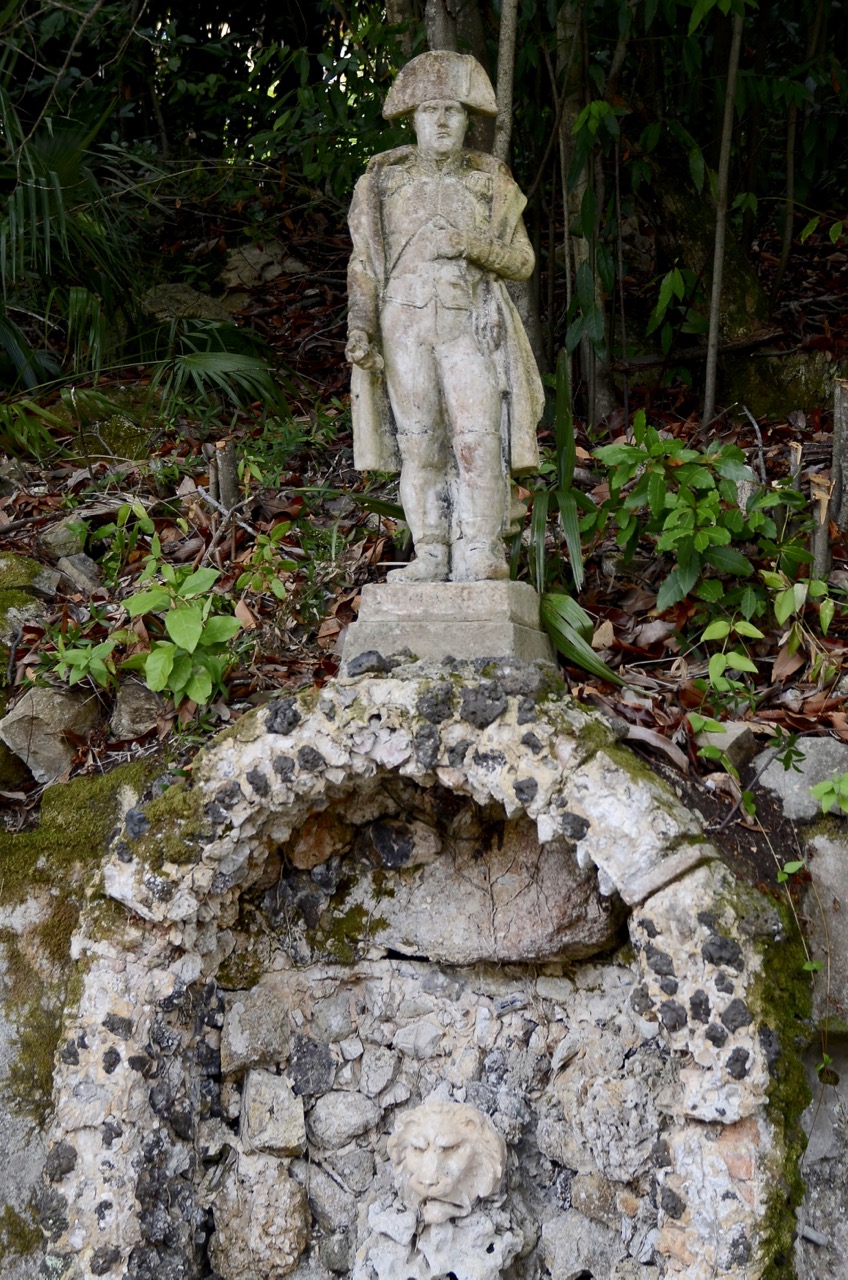 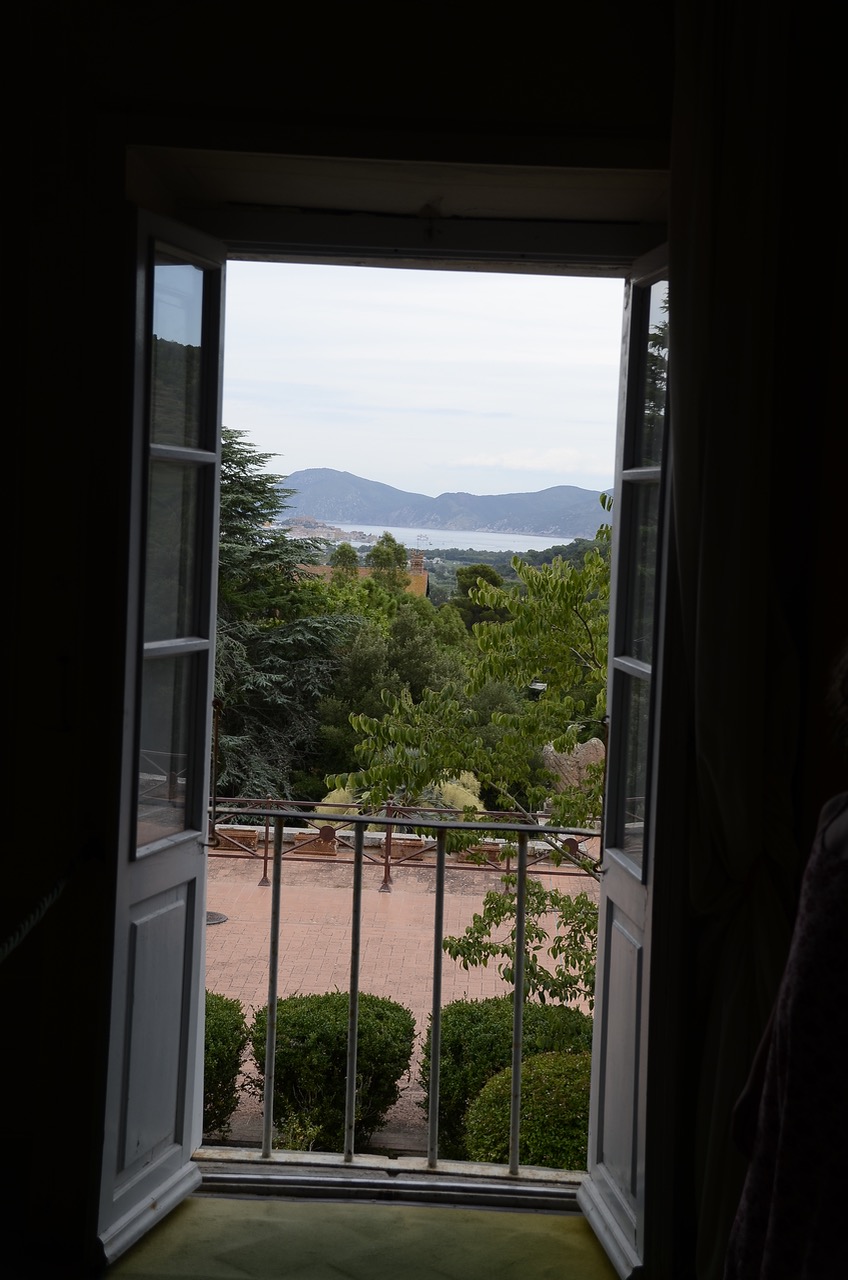 Most of the furnishings are reproductions or equivalent pieces but you can get a sense of the comfort. 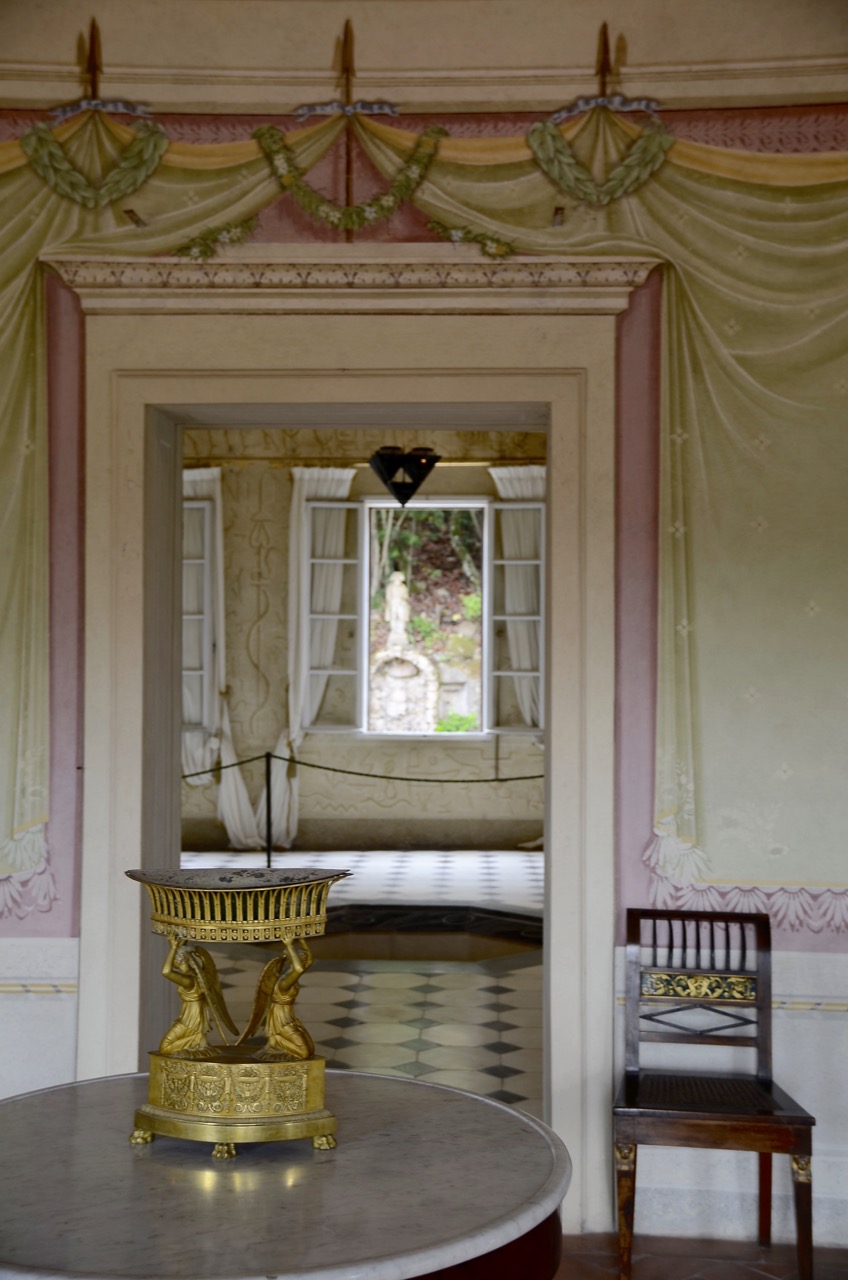 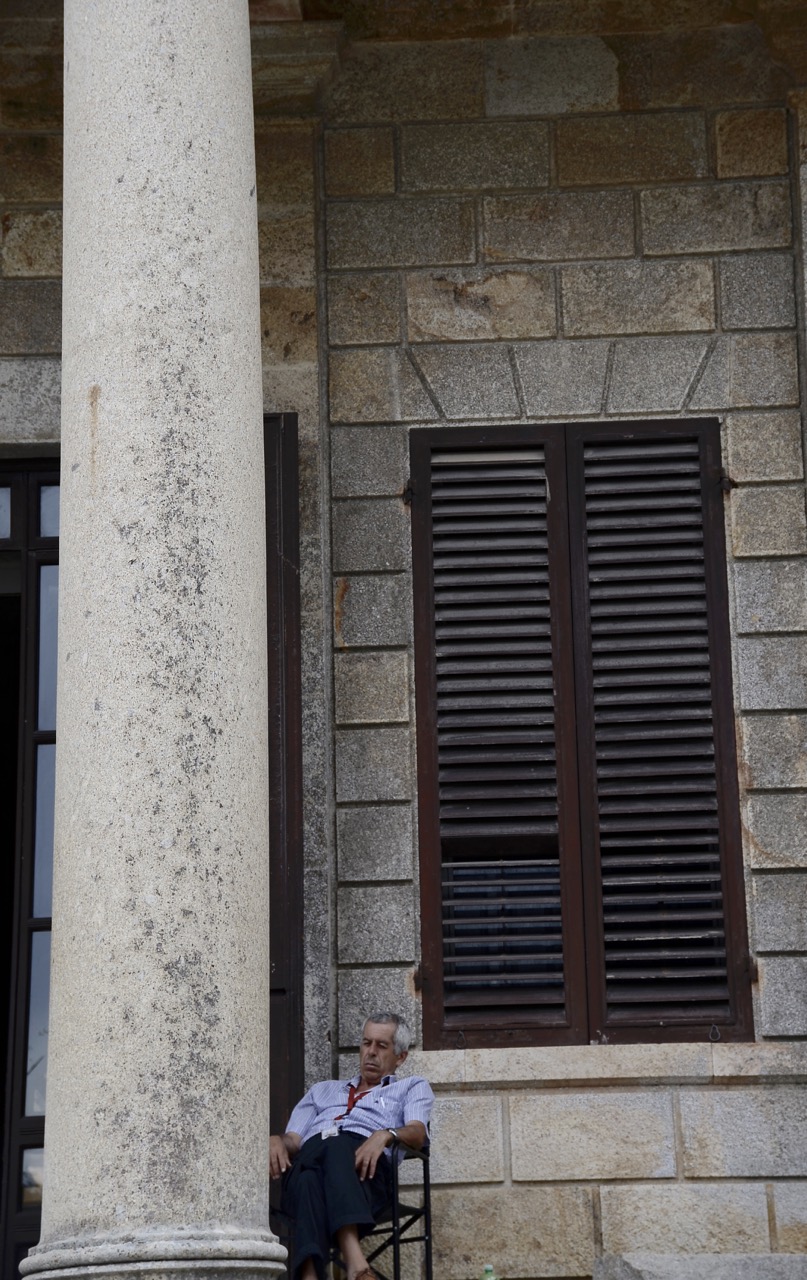 Ferries: There are two main ferry companies – Toremar and Moby – which seem to be interchangeable. There are different ways to buy tickets but in my experience the price is the same, either buying online or from the Biglietteria (ticket office) right at the port. 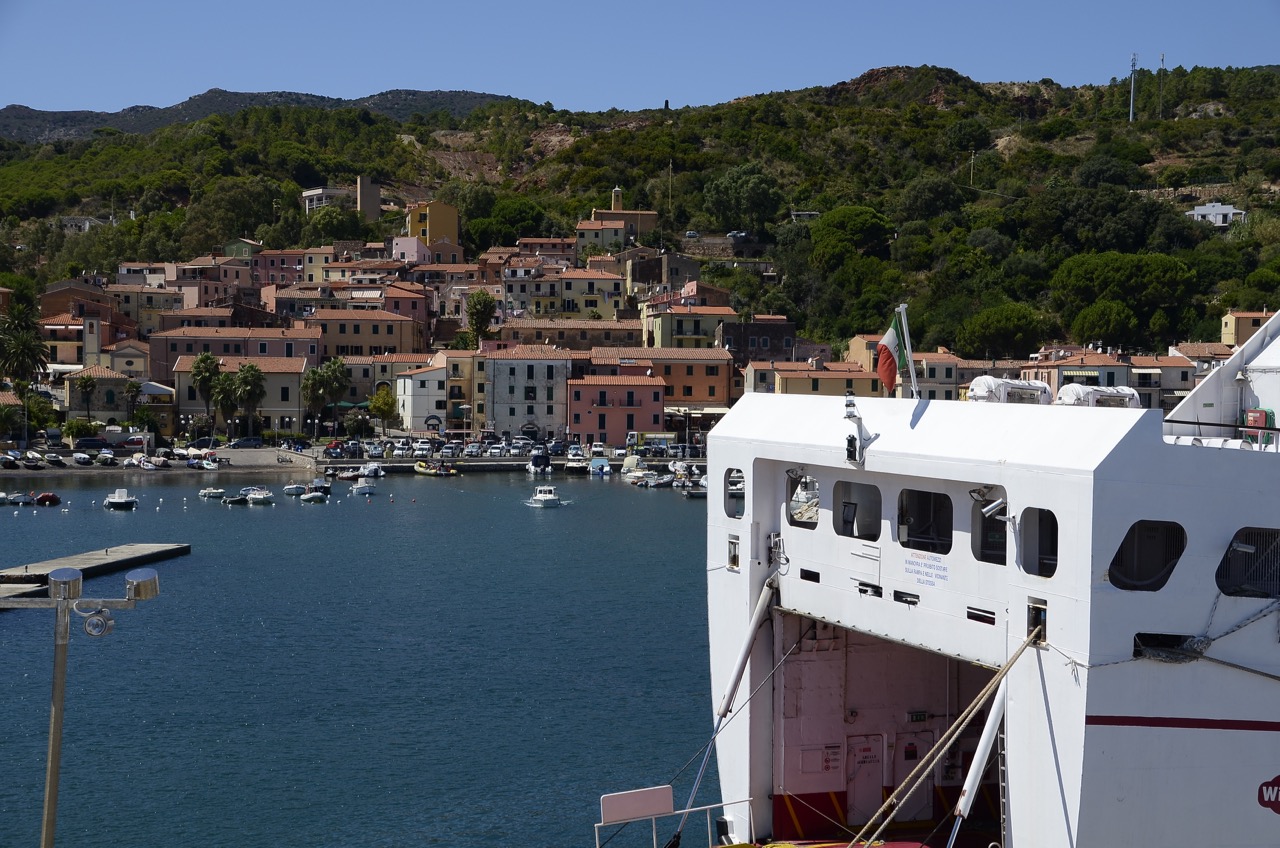 Local specialities: Regular readers know that I don’t claim myself to be a foodie. So for Elba I’ll just say go for fish! Plenty of good options on the menu and fresh fish at the markets. We often passed a cute local hole-in-the-wall place in Marina di Campo but never got to try it – Aclipesca. Wine – the local speciality is rosè and the sweet dessert wine Aleatico goes down nicely. Here’s some more info on Elba wine.

Markets: Each morning from Mon-Sat there is a market in a different town so you might find the same vendors in each place. Procchio also hosts a food market. Here is a list of markets. 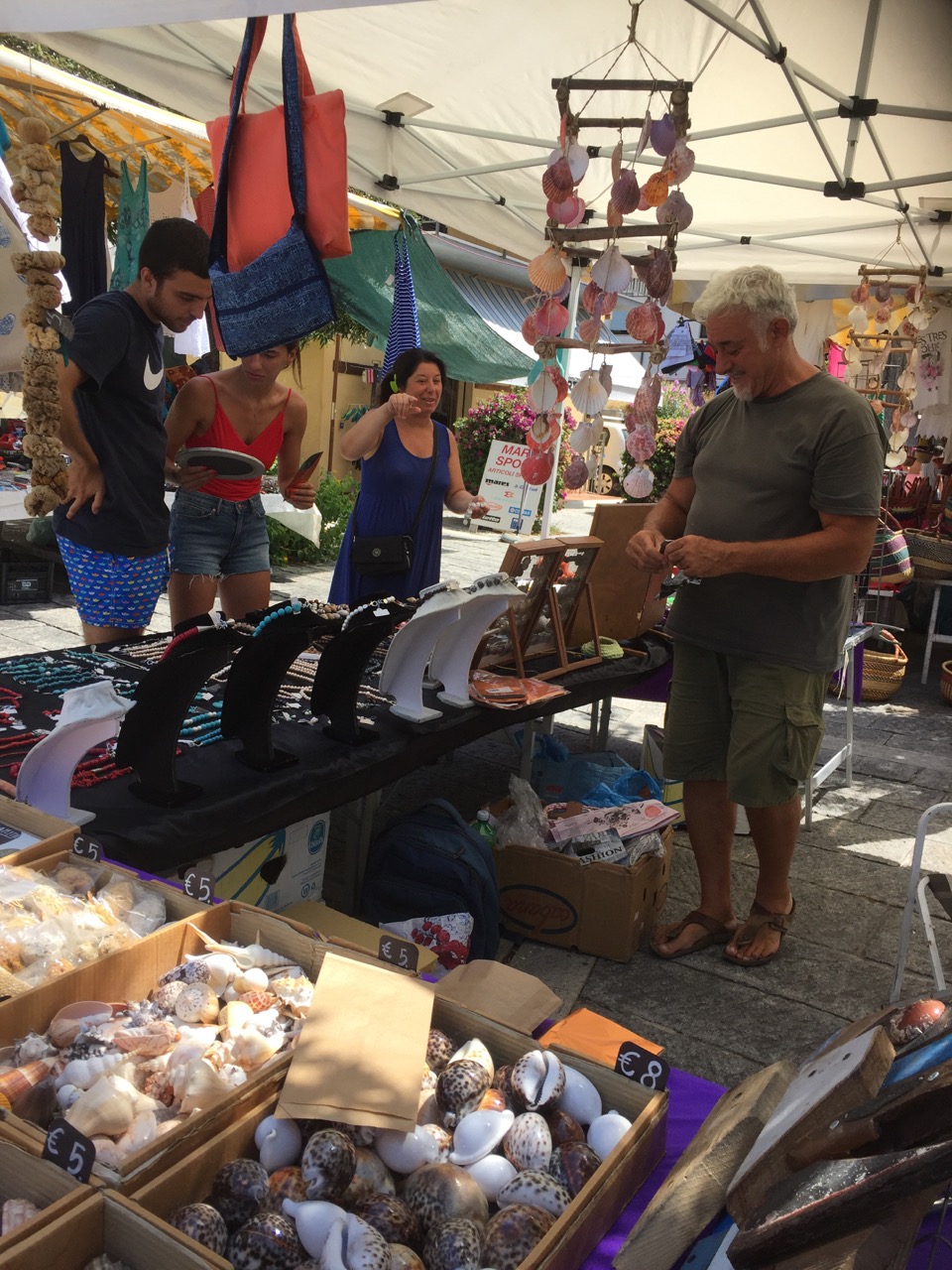 Aquarium: There is a small aquarium just east of Marina di Campo and it’s not a bad spot to spend a rainy afternoon with the kids.

Shopping: Prices for basic goods are higher than on the mainland so you could do as many Italians do and stock your car up at a supermarket on the mainland (except for ice cream and chocolate, speaking from experience). That said, it’s good to consider supporting the small local businesses on the island that rely on seasonal business, and there are plenty of food shops, cafes, restaurants and petrol stations. The main towns for nice boutiques are Marciana Marina, Portoferraio, Capoliveri and Marina di Campo.

Here’s a nice weekend visit described by Georgette at GirlinFlorence.

And the excellent food writer/photographer Emiko Davies has some tips on the Tuscan coast in general. 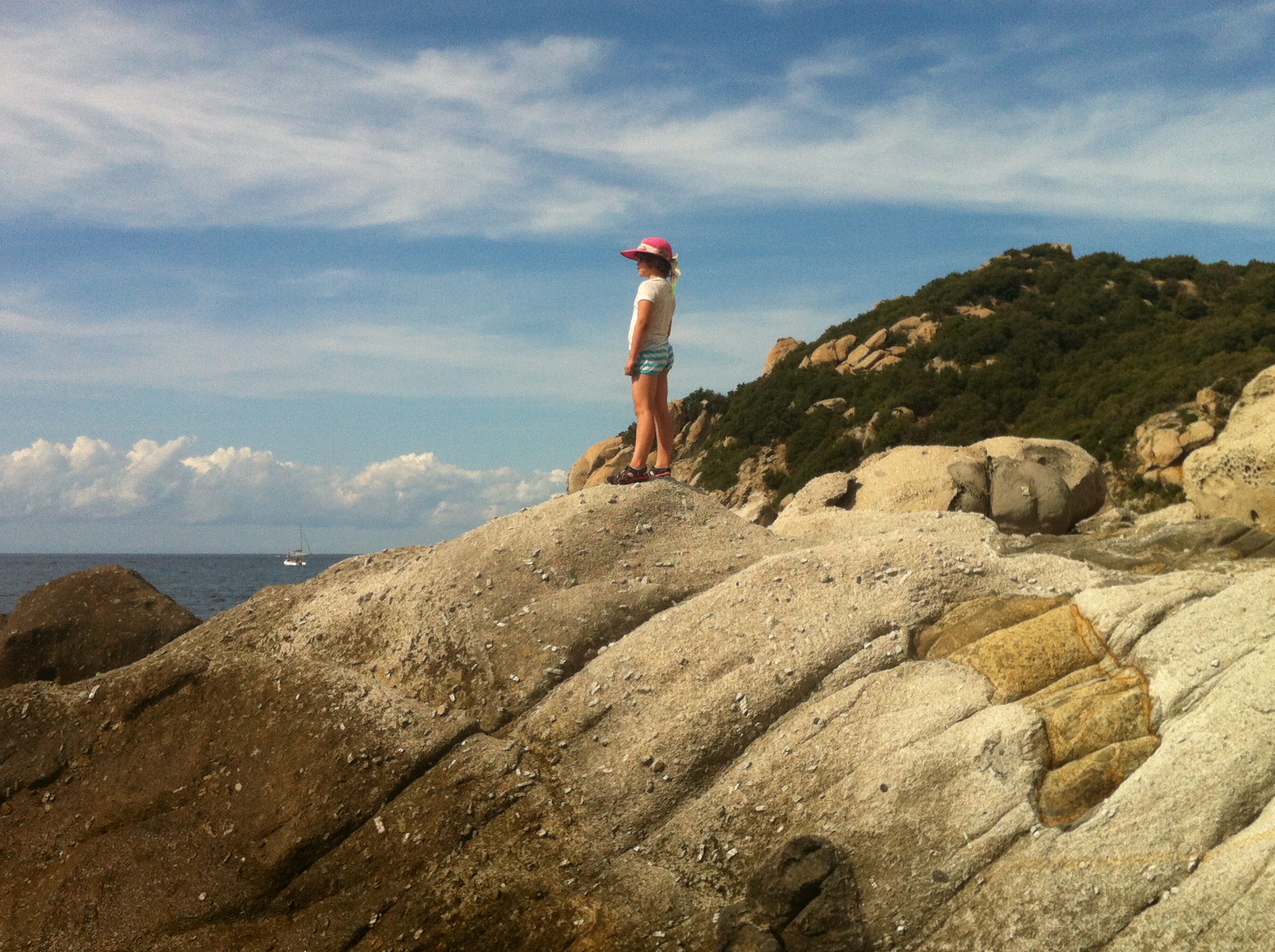