You are here: Home / Italy / Winter in Venice

It’s so obvious that it didn’t even occur to me. Venice is a city for walkers. Visiting it for a few days last December with our two kids, we discovered this was a huge plus: no cars or buses – or even scooters – meant that we could all walk down streets and alleyways together, letting them run ahead, watching out for canals to trip into, though many are walled off. 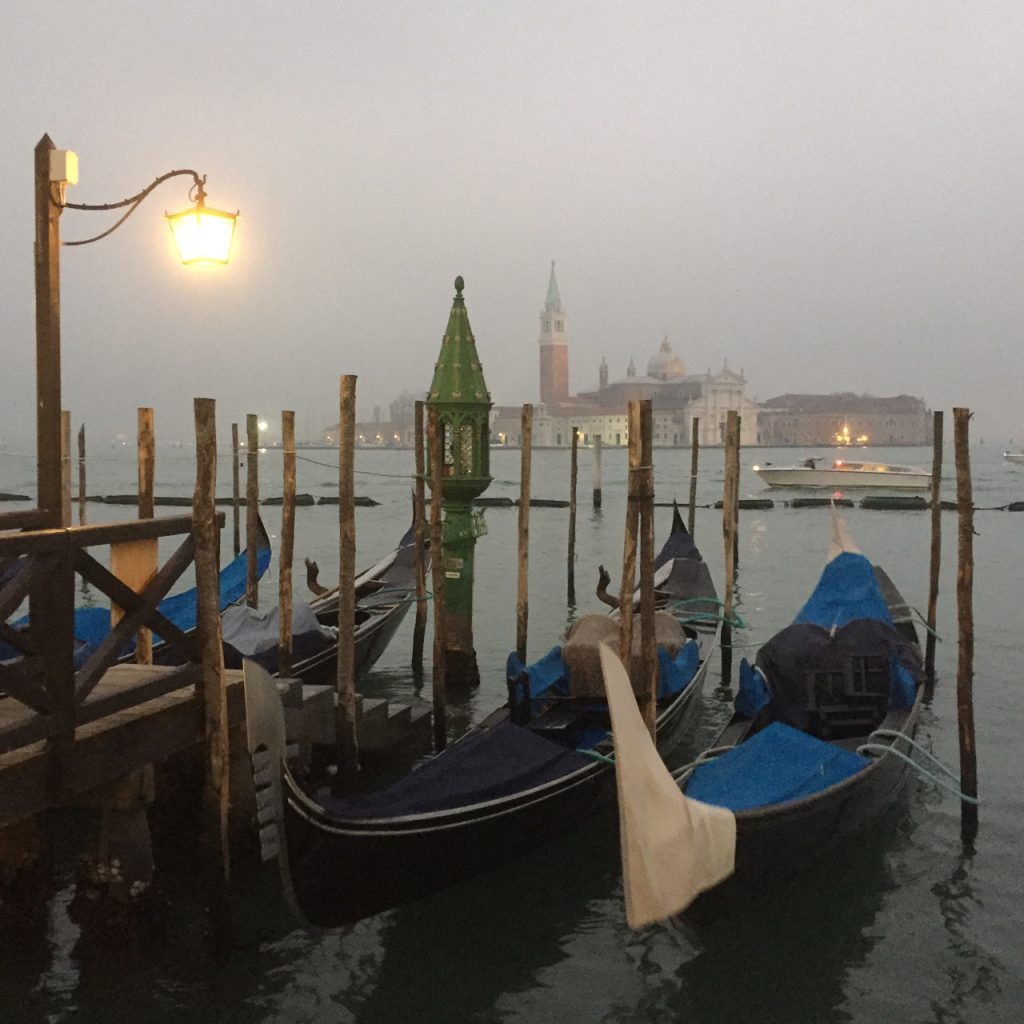 Visiting in winter it is a little less busy and it really is cold, but Venice sure looks gorgeous and like our experience of Florence in winter, it is definitely more of a local town. 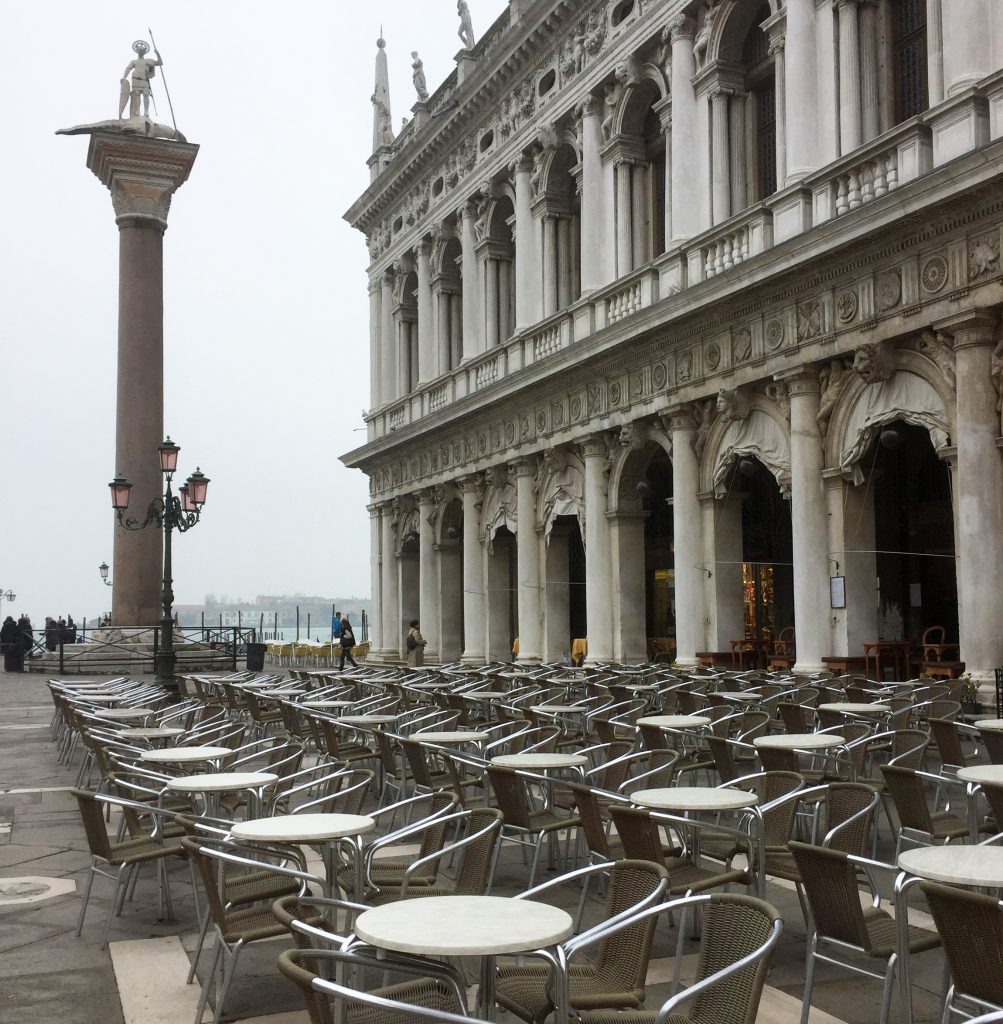 The streets and alleys and bridges are narrow and especially in busy areas you find yourself moving along with the flow of foot traffic. It’s a clichè of Venice but so true: it’s easy to get lost. On my last visit, during Carnival 20 years ago, my friend and I really did get caught up in the side-alley slinking and disappearing of characters dressed in cloaks. 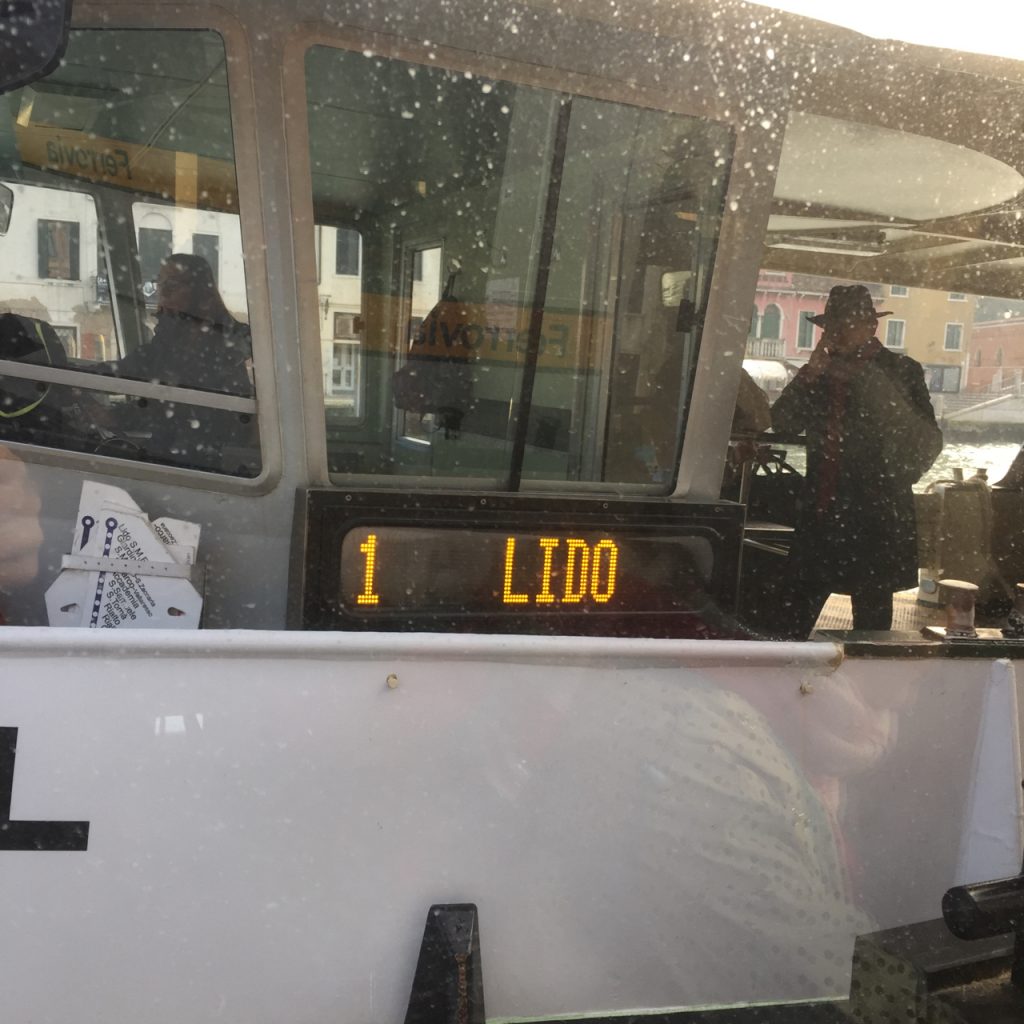 Being a city of walkers means you have to do everything on foot and this influences the fabric of the local society and relationships between people. For one thing, you have to know where you’re going – addresses apparently mean little in Venice, and Google maps has had little success mapping actual street addresses. If you go to someone’s house they often need to come out and meet you at a meeting point. Another point, and this is noted by the writer Donna Leon (in her detective novels and her lovely book of essays on “her” Venice) is that people can shield their identity, and their homes, from acquaintances as they only ever meet in half-way public spaces. 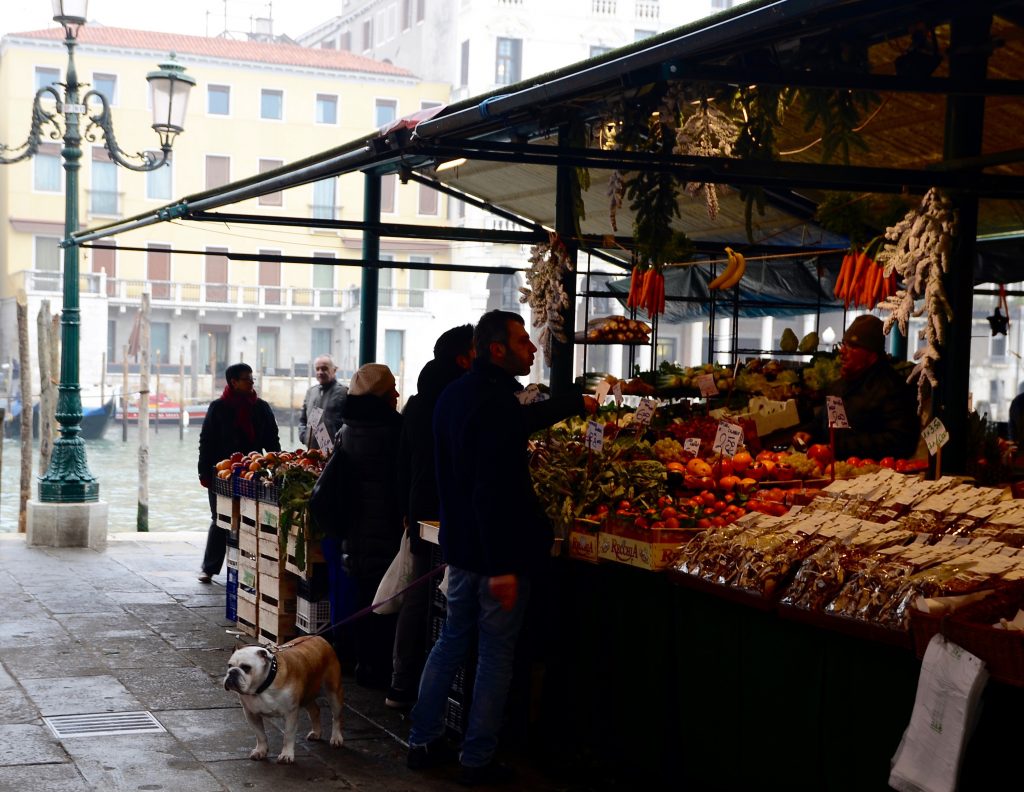 I was fascinated to watch the locals move through this flow of people, you could tell them from their elegant but sensible clothes, fur hats and beautiful gloved hands, and from their more deft, quicker movements (and sighs of impatience). Many pulled along a wheelie bag – for groceries – or had a little rucksack on their back. Supermarkets were small and pokey. People have to shop every day because everything you buy has to then be carried home. If you want a larger item – a washing machine or your christmas tree removed – you have to hire help or get a boat to bring it as close to your house as possible and then of course up all those flights of stairs. 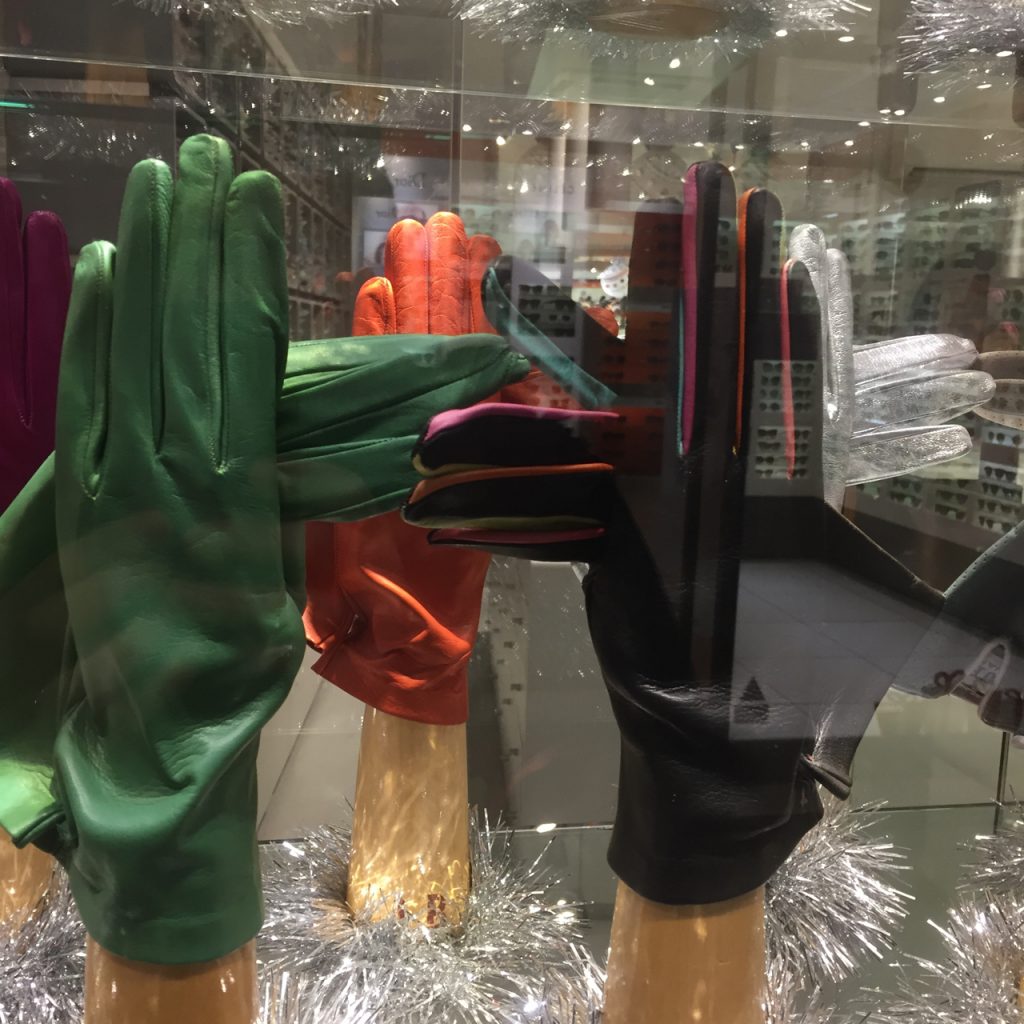 All around this watery city you see delivery men pushing an empty wheely cart one way, or in the other direction full of milk cartons, newly-fixed espresso machines, boxes of fish from the market. Postmen push wheely trollies, the fire brigade whizzes around on the water, there are no bicycles or scooters and even few baby strollers. Where is everyone? Are they all withering old ladies stranded at the top of a palazzo, remembering the golden age? 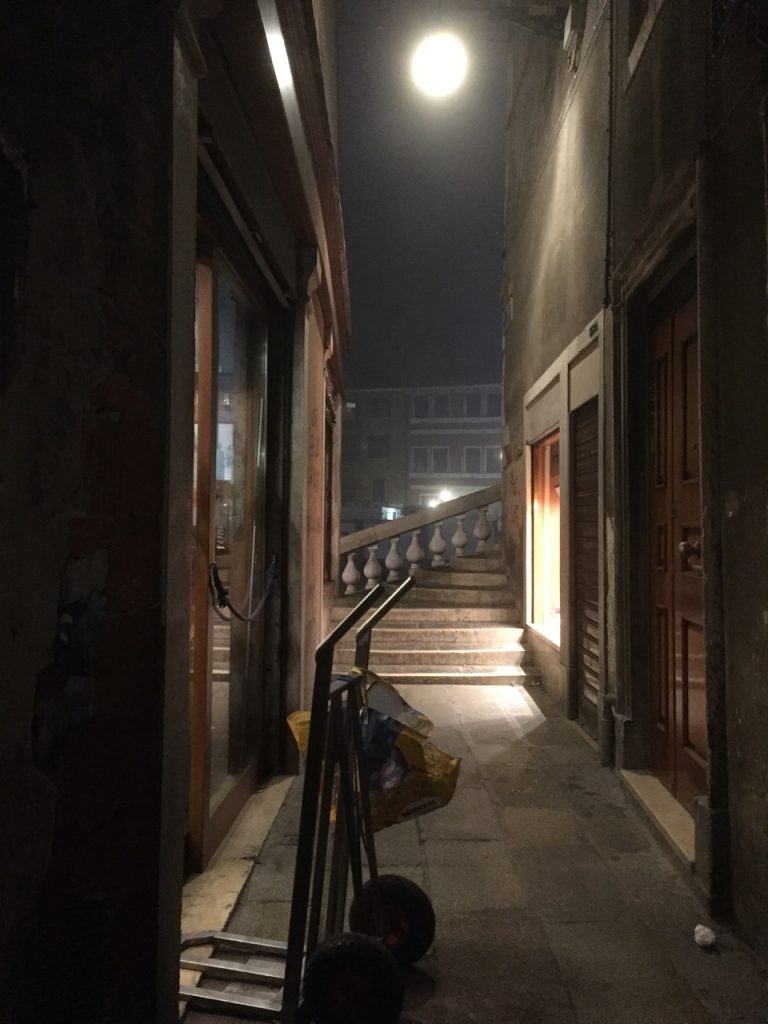 It reminded me of my four years living in New York, another very public place – whether walking or on the bus or subway you are face to face with your fellow residents and in New York you really do look at each other. 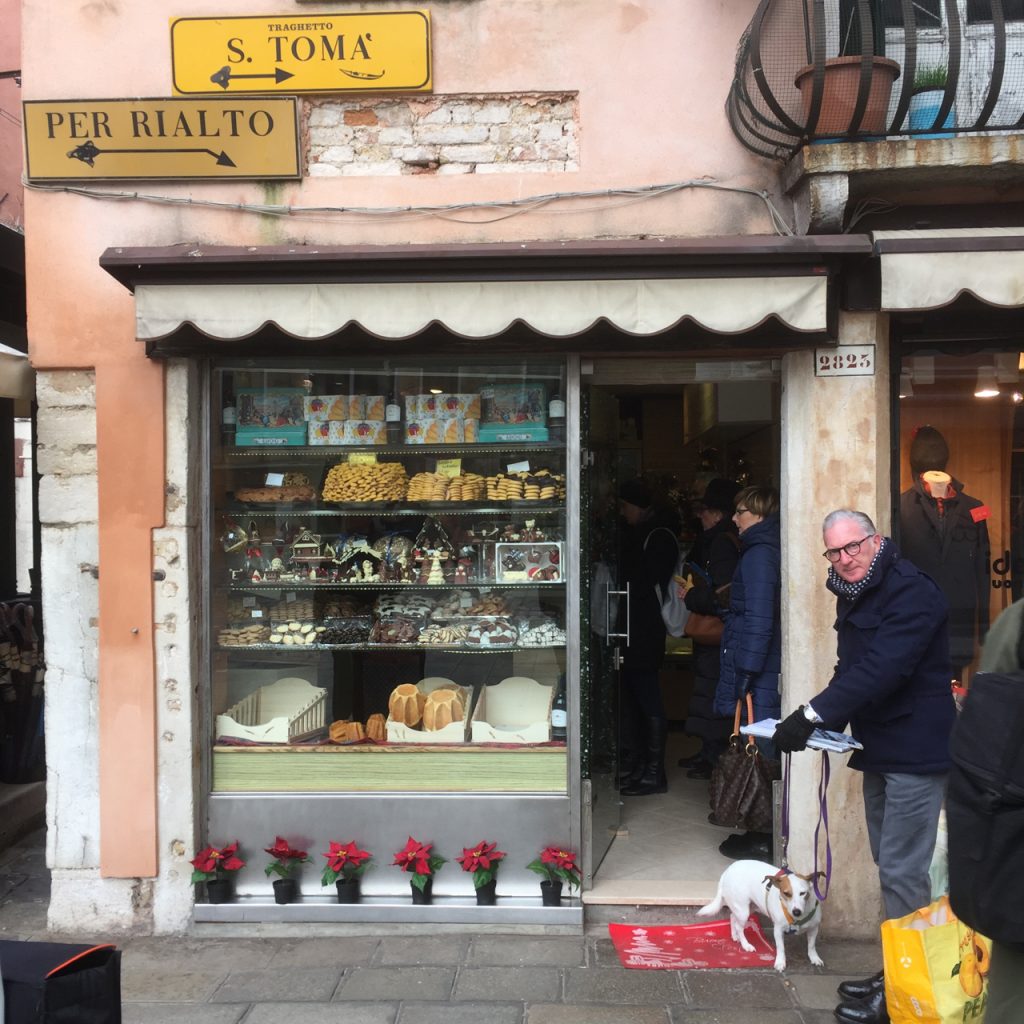 If you don’t feel like walking (or if your fingers freeze off) you can take the bus – it’s a boat of course and it’s not cheap but it definitely gets you around the city, letting you see it from the waterfront views, especially along the Grand Canal. These were the public – i.e. grander – original entrances to the Renaissance palazzi, and worth contrasting to the quieter, more secretive entrances and alleyways you find when exploring on foot. 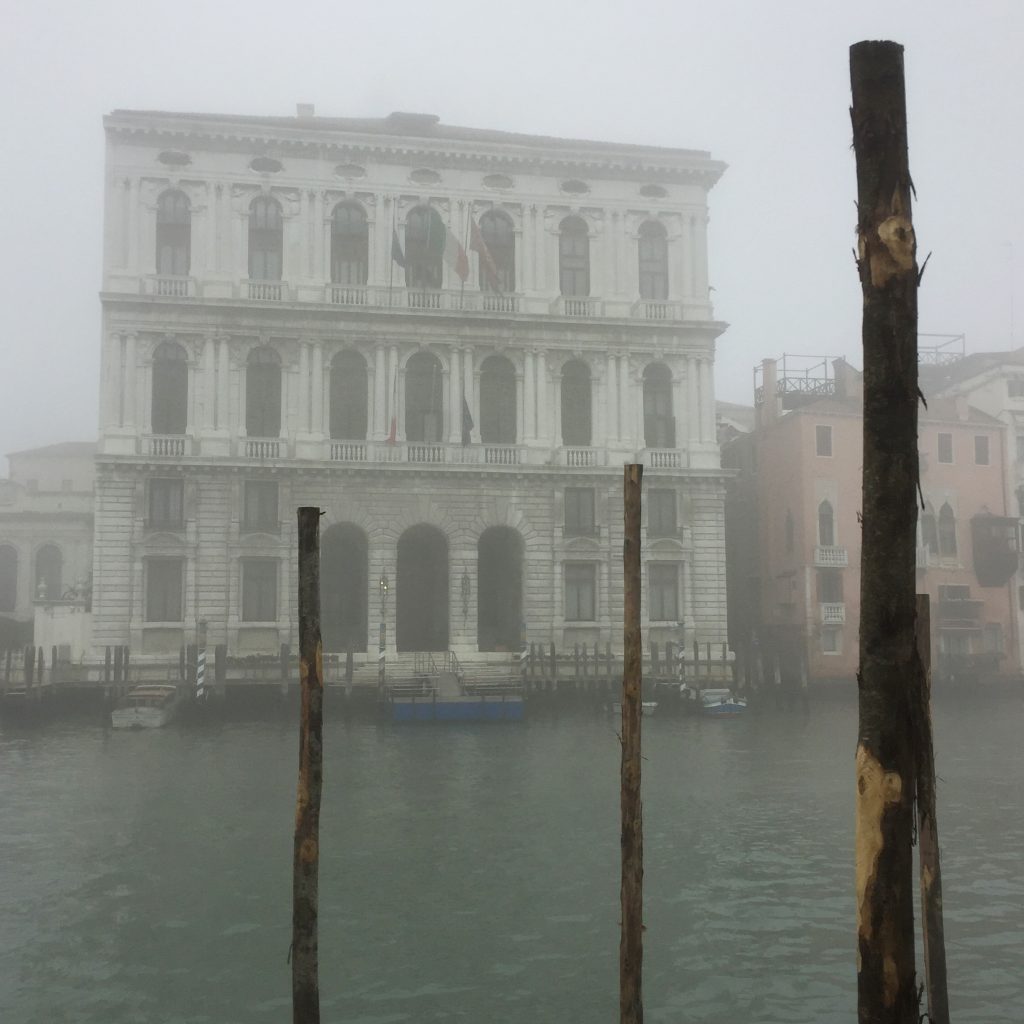 This is a city with about 50,000 residents – and it’s decreasing every year. More and more locals are priced out by non-locals buying up property in the historic core, much of it as investment or at most temporary acommodation. 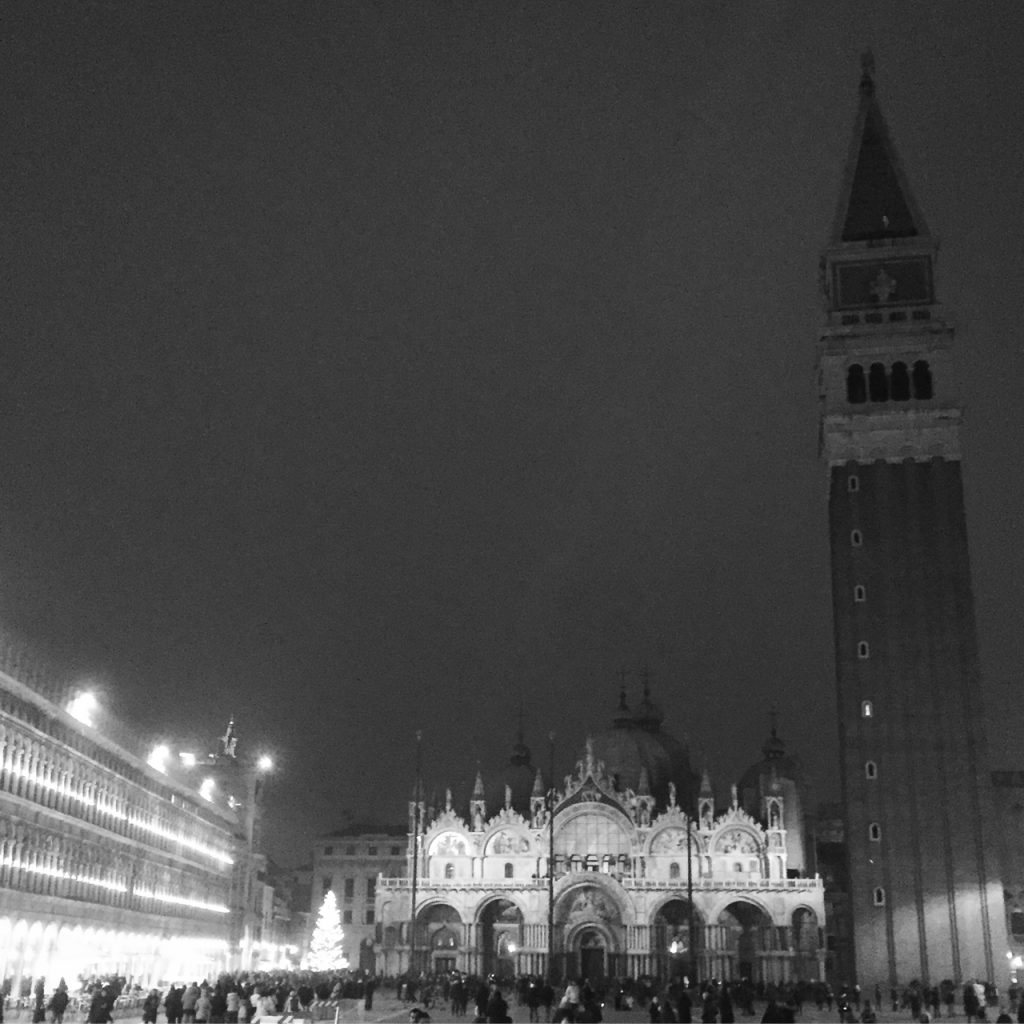 In Venice one of the many problems created by the infamous cruise ships is that the visitors don’t spend their money on land-based food and lodgings. Only 20% of these visitors actually get off the ship, the rest presumably enjoying videoing the view of San Marco from the water. Another problem is the increased number of homes owned by non-Venetians, sending prices up to cut out the locals. Walking through the city you can sense the discarded everything that lies below – beneath the streets, in the water. Most cities do sit on top of their waste (ask any archaeologist) and here you do start to feel it everywhere; crumbling masonry, stained stone and wood, closed-up shopfronts, signs marking high-water or acqua alta – periods when certain areas might be flooded by local floods. But then there’s a surprise bit of art on the street or a glimmer of light through a craftshop window through the fog. 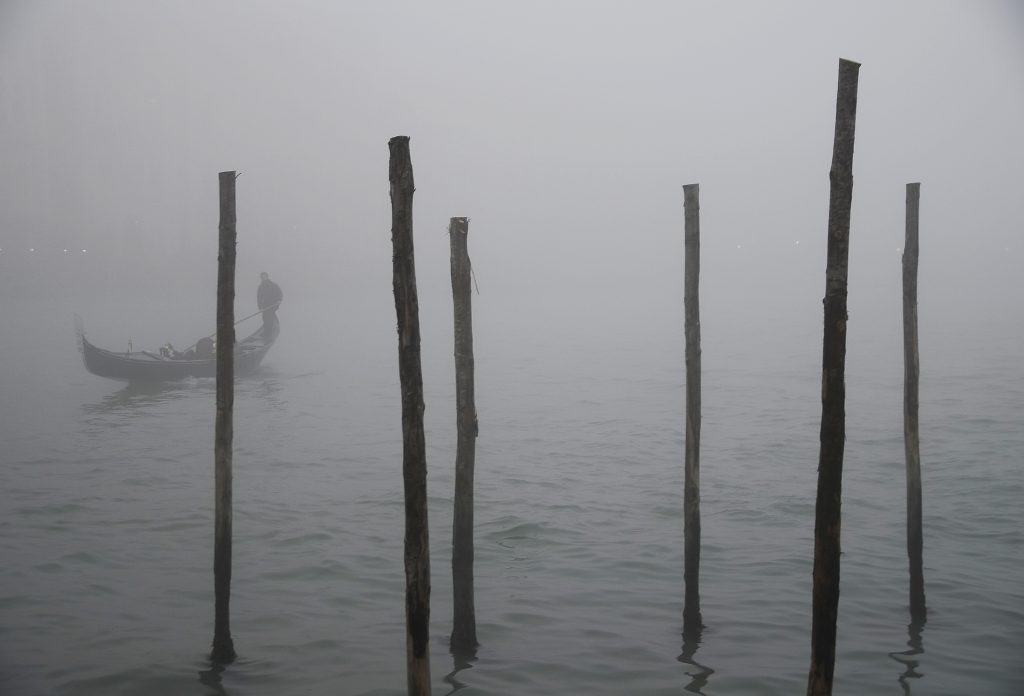 And the magic is there. We got a sense of a different twist of it on a blustery afternoon at the beach, the Lido. A strange choice, but when you’re a kid, a beach is a beach. Wandering through the closed-up beach huts of the Hotel des Bains we found our way to the entrance of this iconic old spot. The hotel is now closed up and according to the guardedly-chatty Polish security guard, the new owners don’t know when it will be cleaned up and reopened. 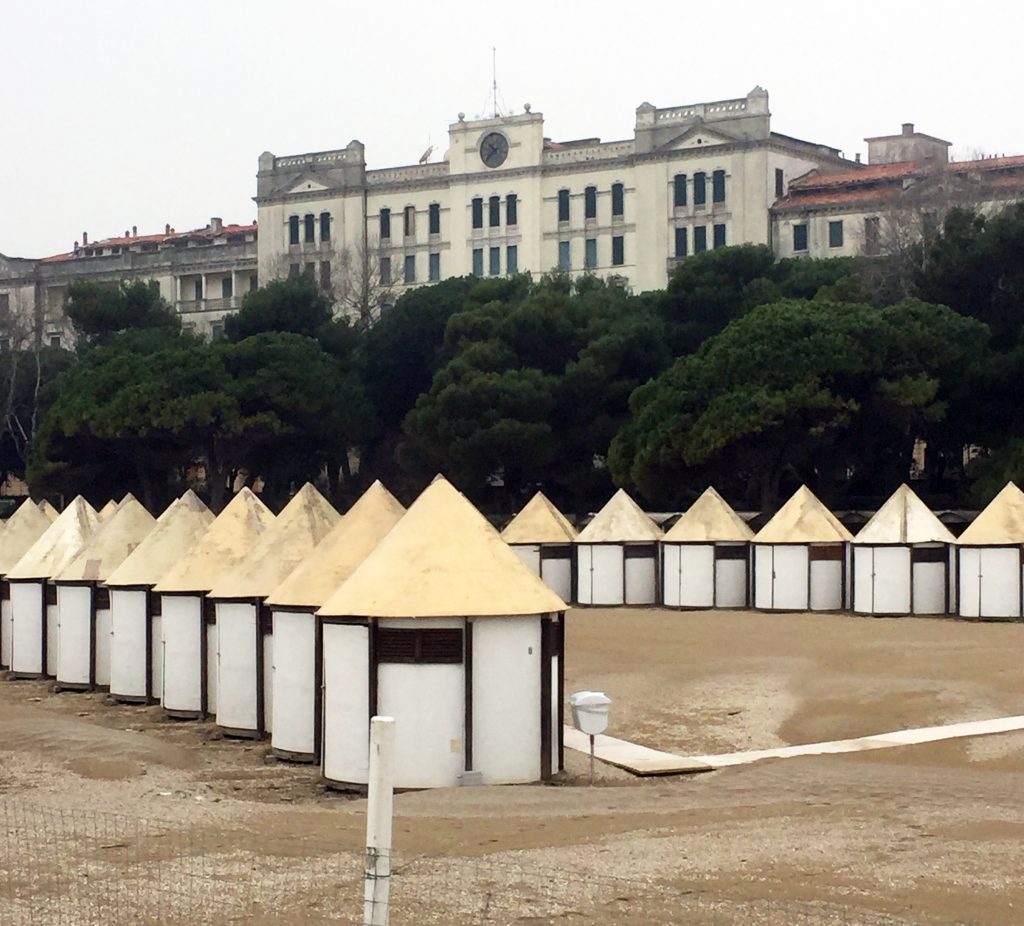 The Hotel des Bains was the inspiration, and setting, for Thomas Mann’s 1912 novella Death in Venice. When I was about 19 I sat in an arty cinema in Paris and had my first “big film moment” when I was captivated by the lavish Visconti 1971 film of the book: lapping waves, obsessions, melting makeup and bar-perfect Mahler. After our trip here I finally read the book and Mann’s prose captures the sickness of the whole city, even, you might say, of civilization.

“Such was Venice, the wheedling, shady beauty, a city half fairy tale, half tourist trap, in whose foul air the arts had once flourished luxuriantly and which had inspired musicians with undulating, lullingly licentious harmonies. The adventurer felt his eyes drinking in its voluptuousness, his ears being wooed by its melodies; he recalled, too, that the city was diseased and as concealing it out of cupidity, and the look with which he peered out after the gondola floating ahead of him grew more wanton.” (Thomas Mann, Death in Venice) 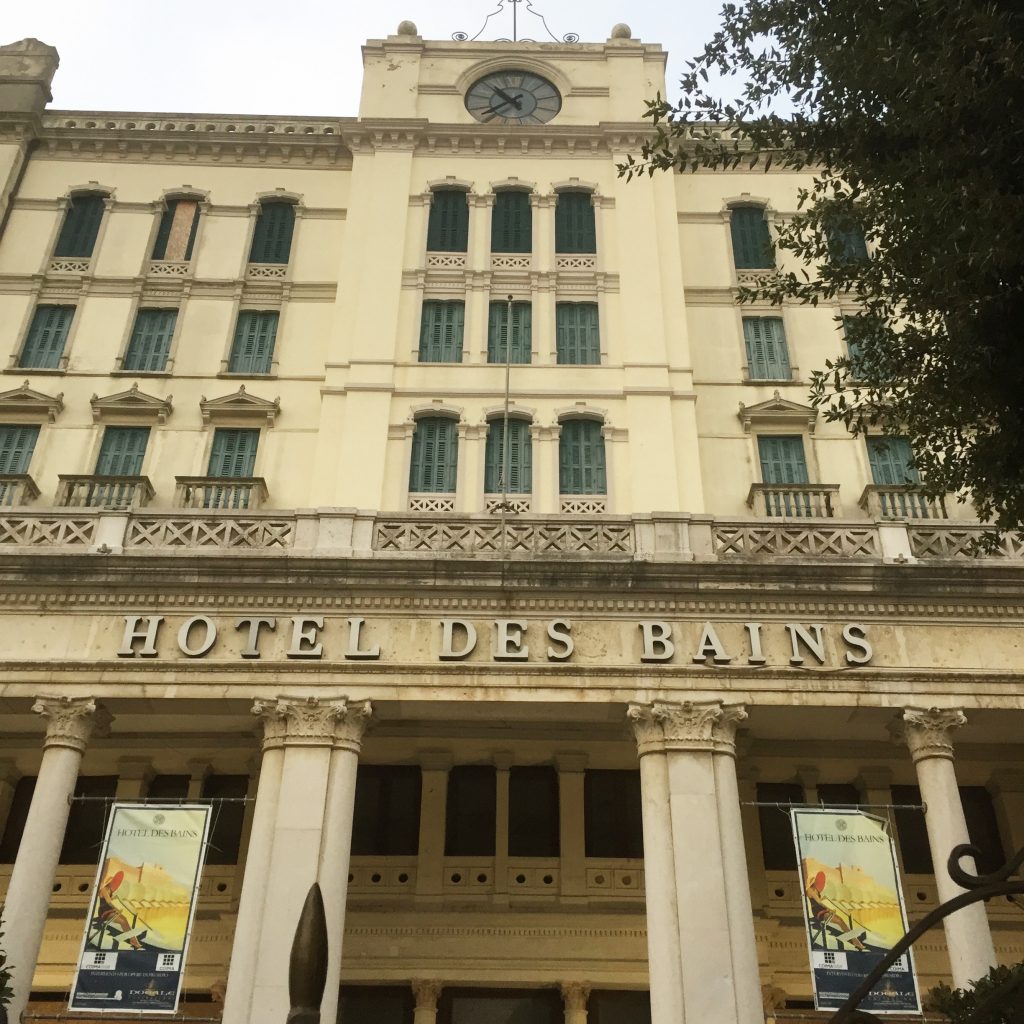 I ask our 10 year old her how she enjoyed our weekend in Venice. “I really liked it… but I don’t want to go back”. Why not? “Because it’s sinking and I don’t want to make it any worse”.

I tried to reassure her that we did our bit, trying to live as locals: shopping for groceries at supermarket and markets, sampling smaller pastry cafes, restaurants, buying warm hats and gloves from an Italian (chain) store when heading to the Lido, even renting ice skates from the man running the charming temporary ice-rink at Campo San Polo. La Serenissima – she’s still there, just getting a little older.