You are here: Home / Ireland / The Truth about the British Isles

It’s a bit of sport for Irish people to watch how a successful Irish person – like Saoirse Ronan – is called British by the media. Over the years I’ve had to explain many times (even to English people), that we are not British, or part of Britain, or the UK. But we are in the British Isles, though not the British Islands. More complicated is Northern Ireland which is part of the UK, but not part of Britain. But it’s also in Ireland but it also depends on your point of view…

This week, the best female chef in the world award went to Clare Smyth. Born in N.Ireland she lives in London, where she got the job to cater the royal wedding (their royals, not ours, though I am also technically Canadian so they are mine too…)

In most papers (Irish Times, the Telegraph, Northern papers) she’s “Northern Irish”.
In the Irish Independent she “Irish”.
In the Guardian she’s “a Briton”.
And in other local papers she’s just “Antrim-born”.

(Quick tip – you’ll only offend Irish people if you get things mixed up. Though the Scots might not like it, or the Welsh, or some Manx, or whatever people from Guernsey are called…)

If you’re still confused, here’s a nifty diagram I think is excellent. 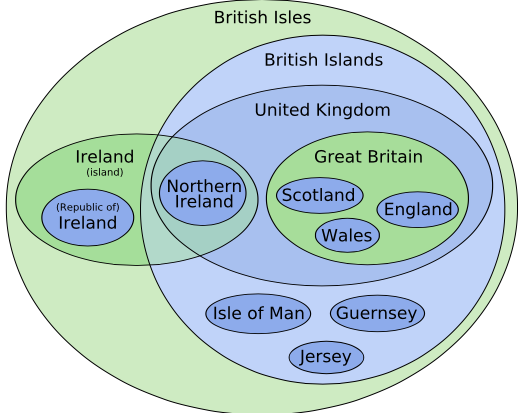 And you can read a really detailed explanation on the British Isles in Wikipedia.