You are here: Home / Language / These Crazy Celts!

I’m Irish, which means I’m a Celt. I’m strong and bold and proud of… all the things we’re supposed to be proud of. I don’t have red hair and only drink moderately but I love the music and art and language of my homeland, all of which are widely considered to be “Celtic”. And I am charged with carrying forward all this legacy, this Celtic-ness, to my own two daughters, to teach them to stand up proud and be counted as Celtic women!

But it looks like they have their own ideas as to what that word might mean. And I might need to revise some of my own thinking – as I found out last weekend.

We took a few days off to go skiing a few hours northwest of Florence, in the Apennine mountains along the border of Tuscany and Emilia Romagna. We discovered that the cheap self-catering place we had booked online was not only remote and hard to find but was actually a intact, restored “celtic” medieval mini-village (called a borgo in Italy) at the otherwise-uninhabited base of Monte Cimone. 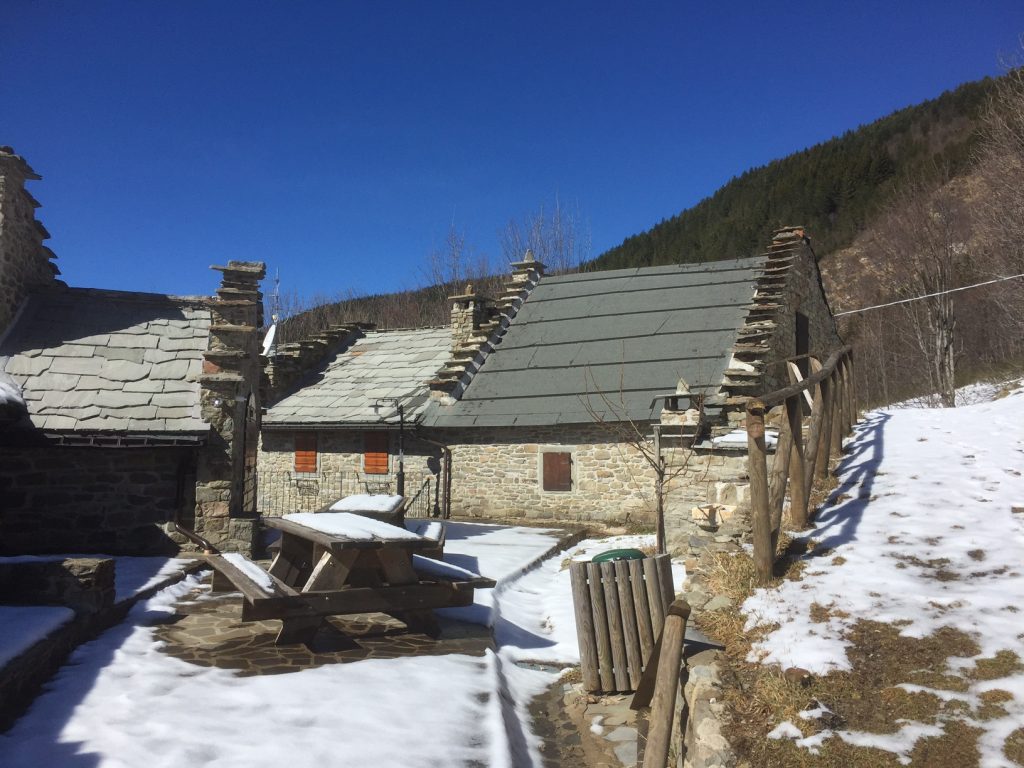 Near to our lodgings there were various Celtic remains, which included a stone and thatch hut that was rebuilt to show the typical home of the assorted Celtic tribes that were living (well actually hiding) in the area around the 4th century. They were being slowly driven north by those determined Romans – who eventually succeeded in their task, pushing whatever was left of the Celts to cling on at the edges of Europe (my own homeland included). There were Celtic tribes were all over Europe and you can find traces of them in most central European countries and where the Romans didn’t push them out, they were eventually converted to Christianity and mostly disappeared.

“You know, the Celts weren’t as organised as the Romans” says our 10 year old as we climb along the interpretative path to reach the hut. “They were a bit all over the place, quite violent. And they had a thing about heads”.  She’s been studying this at school – the Celts get about 4 pages in her history book, unlike the 50 pages of Roman history she’ll be slogging through for the rest of the term.

The hut was called a Capanna Celtica – if you pronounce Celtica the Italian way it’s with a Ch. The 8 year old in the back seat tries out the pronunciation – Cheltica – and it sounds strange to my ears. “How do you say it in English?”, she asks. My hard-wired Irish-educated reaction is to firmly tell the kids in the that in this family we use the hard C like a K, “Celtic”. Unless it’s for a football club in Glasgow. “Or the Boston Celtics”, chips in their dad.

But if you dig around a bit, on the internet no less, you quickly discover that this is a complicated issue.

The pronunciation of the word is a modern invention. Julius Caesar would have pronounced it Keltic (apparently) but in Britian it was taken up with an S back in the middle ages. The romantic Celtic revivalist movement of the 19th century, in Ireland and Britain, brought the hard C back into fashion and it has stuck.

Here’s a fantastic, and deliciously mean, quote from a piece published during the 1850s by the Celtic Union in Ireland.

“Of all the nations that have hitherto lived on the face of the earth, the English have the worst mode of pronouncing learned languages. This is admitted by the whole human race […] This poor meagre sordid language resembles nothing so much as the hissing of serpents or geese. […] If we follow the unwritten law of the English we shall pronounce (Celt) Selt but Cæsar would pronounce it, Kaylt. Thus the reader may take which pronunciation he pleases. He may follow the rule of the Latin or the rule of the English language, and in either case be right…”

I think my sense of being Celtic was drummed into me over many years and I carried it around like a chip on my shoulder. At school we learned that the Celtic artwork of Ireland was the highest point of our artistic heritage, revered around the world. Last summer I dragged the family around the “Treasures” room of the National Museum in Dublin, to be awed by the Tara Brooch and Cross of Cong. To my eye they’re still astonishing, to theirs a little less so – as attested by my not being able to take a photo of them standing still in front of one of these receptacles of national pride.

I studied the History of Art at college and during a year of study in Florence in the 1990s there was a huge blockbuster exhibition on about the Celts, one of the first big comprehensive exhibitions about them. I never got to see it but I got my hands on the enormous catalogue and was horrified – on behalf of my entire nation – to see how little Irish art had been included. How could they? What wonders they were missing out on! The exhibition, I realise now, was focused on the earlier origins of these peoples – the likes of those building huts with thatched roofs to be discovered years later by tourists stopping by on their way to the ski slopes.

The golden age of “Celtic art” on show at the Dublin museum (between the 600s and 800s) really uses the term as a romantic name for a style, to call it something in contrast to the artistic void that was the dark ages in the rest of Europe. Those soft-accented, bald-headed monks who laboured for years over illuminated manuscripts and the artisans who pressed precious stones into mitres left amazing prizes behind them before the Vikings arrived and started messed things up.

What the kids know about the Celts is a bit broader and more up to date. Apart from those history classes, this Horrible Histories book is one of a series which recently appeared in the house. It includes plenty of discussion about what they did with heads, sanitary customs and other yucky details. 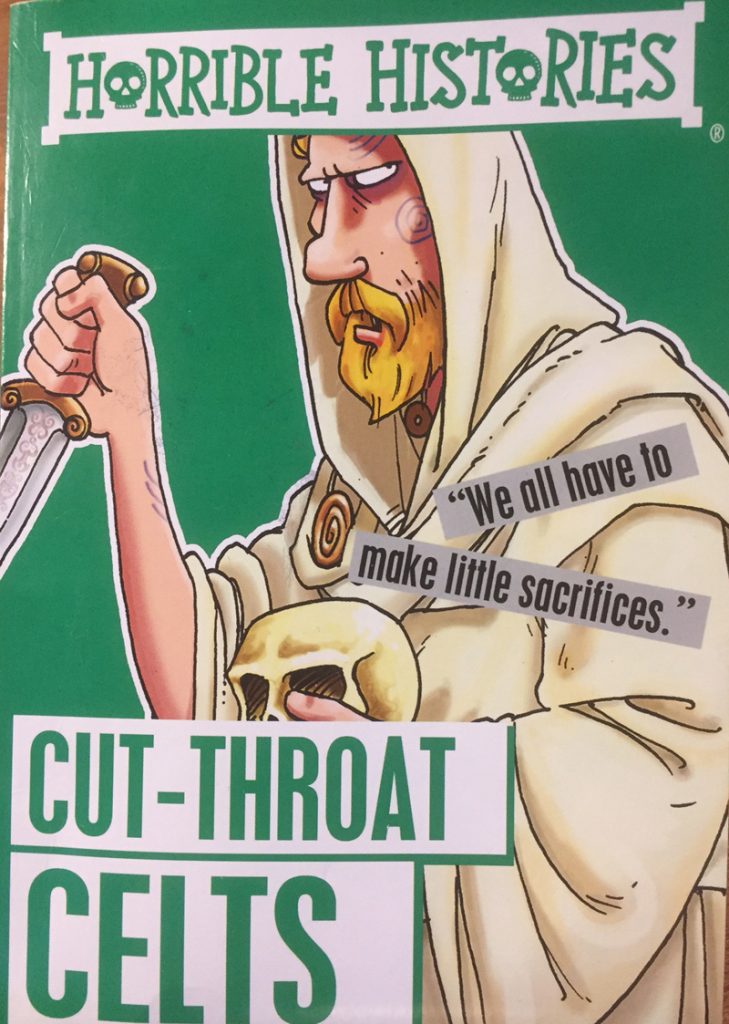 Asterix books are also popular in the house, and with Italians. These long-loved stories of the plucky little Gauls (what the Romans called Celts) up in their corner of Brittany with their secret strength potion, and appetite for dancing and wild boar, were constantly beating up the Romans. 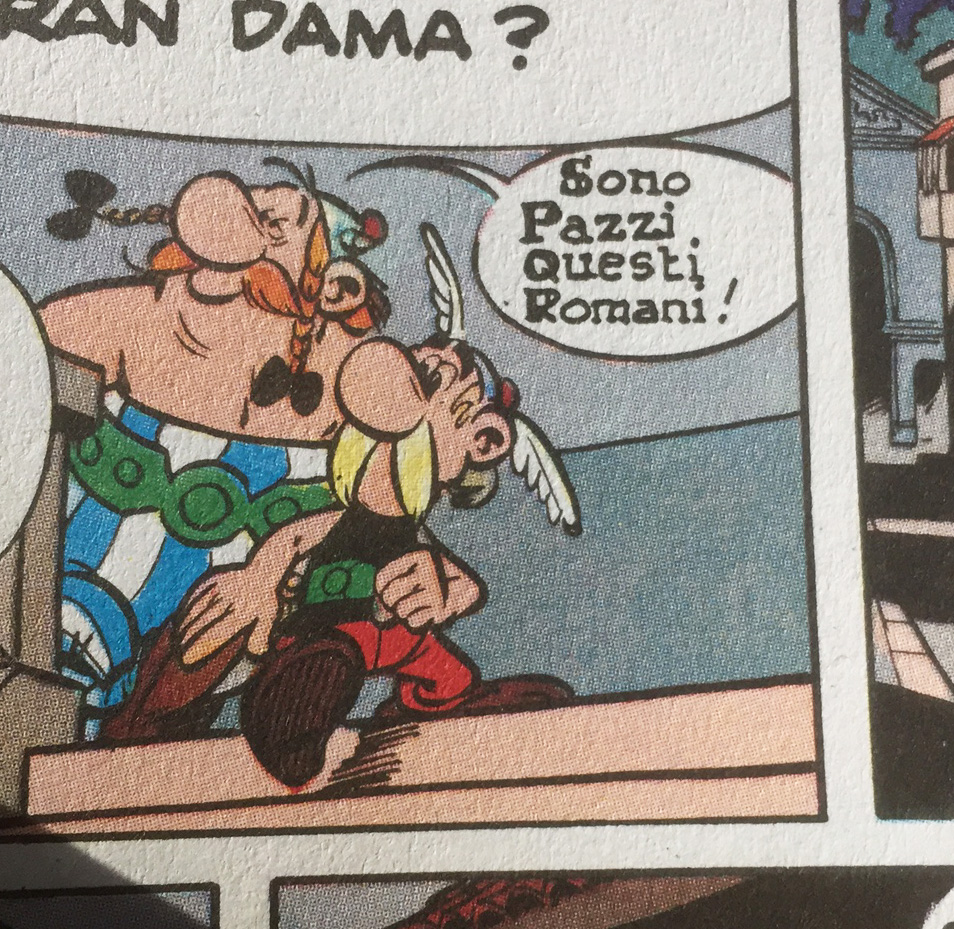 – which nicely echoes the SPQR, the official title of Rome (Senātus Populusque Rōmānus: The Roman Senate and People). They were crazy alright, but in the world of Asterix they never quite got the better of them.

So here we are, a family of Celts in Tuscany, battling against the stereotypes and trying to make sense of it all. At this stage of my life, having lived in several places, I can claim many other identities that just the ancient Celtic – Canadian, New Yorker, Londoner, Norwegian, even a little Tuscan. And my kids even more so, with their feet in several homelands.

Maybe I shouldn’t mention to them the fact that being a Dubliner by birth I’m probably more Viking than anything else. 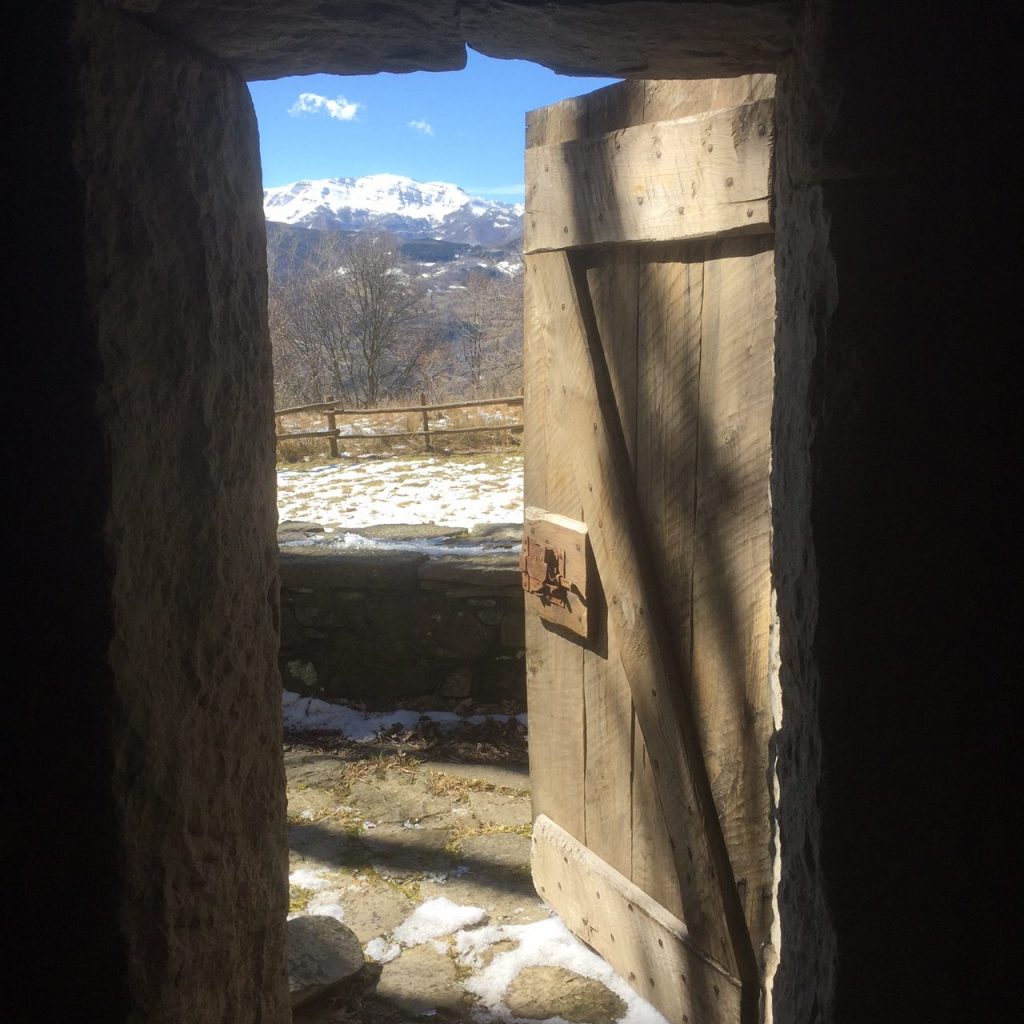