You are here: Home / Art / That wasn’t so boring (part 3) – Ytalia sculpture show at Forte Belvedere

This is what you’ll get on a visit with your kids to Ytalia, the contemporary sculpture show at Florence’s Forte Belvedere. It’s only on for until October 1st but now is the perfect time to visit, in this cooler weather and before school gets busy. There’s even a temporary bus service running to it from outside the Pitti Palace.

I was flipping through my photos from our visit there in June and I remembered how much fun we had, all of us! I’ll share below some images and reflections on what the kids enjoyed most about the art. 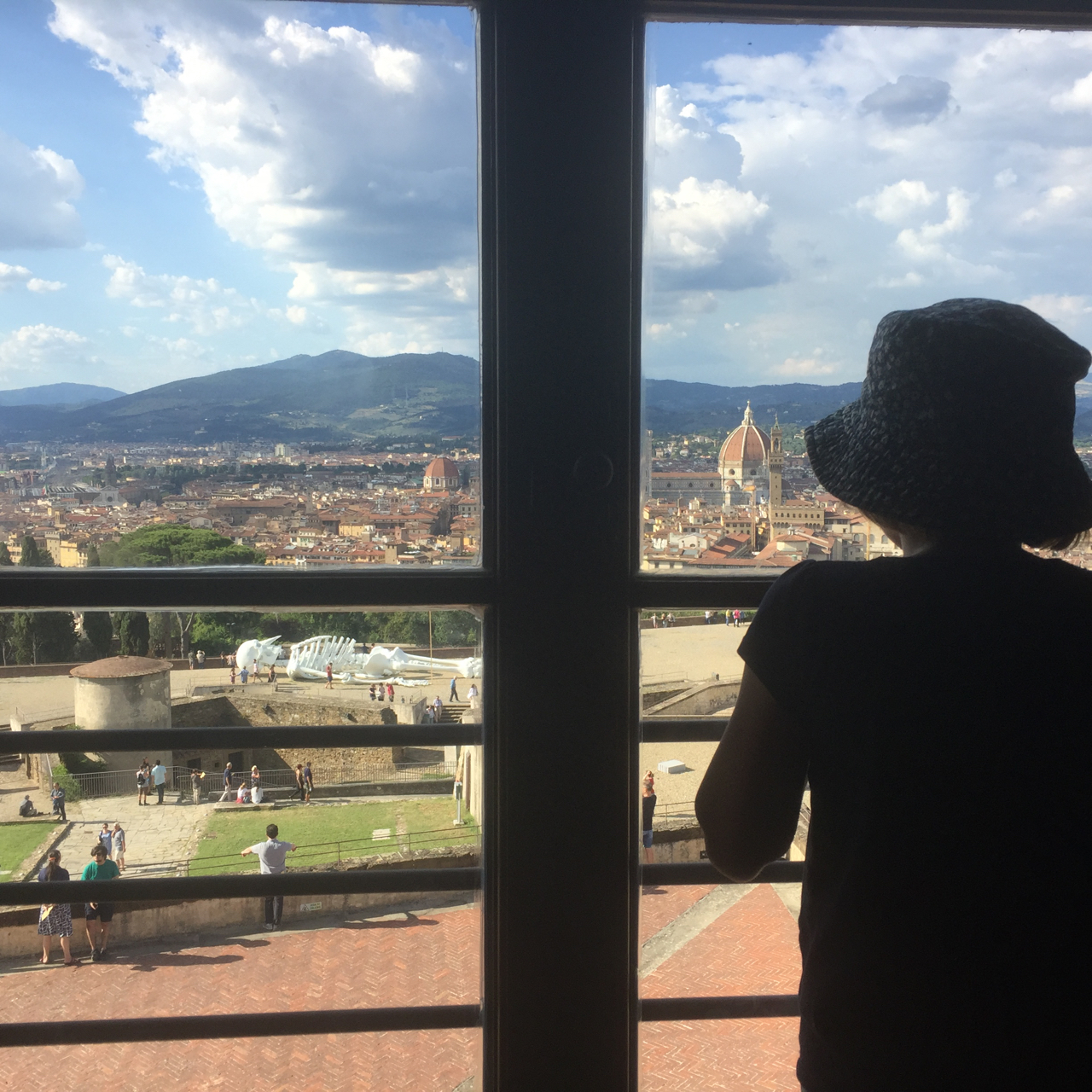 This is the 3rd in my series on visiting art with kids in Florence – the others were about the Bill Viola show (now closed) at Palazzo Strozzi and tips on visiting the ancient church of San Miniato al Monte.

High up on a hill south of Florence, you can walk here from San Niccolò, over from Piazzale Michelangelo or through the back of the Boboli Gardens.

There’s plenty of trivia to impress your kids child about this old fort along Florence’s city walls:

It was partly designed by Michelangelo and by Buontalenti (inventor of gelato). The Medici used to stash their treasure here. Galileo (whose home and observatory are on the nearby hill of Arcetri) made some discoveries here. It’s full of secret passageways, not many of which you can explore now but you can still feel the atmosphere. And of course, it’s also where Kanye West and Kim Kardashian were married in 2014.

There is a basic bar/café inside, prices are reasonable and the surroundings pretty darn nice. 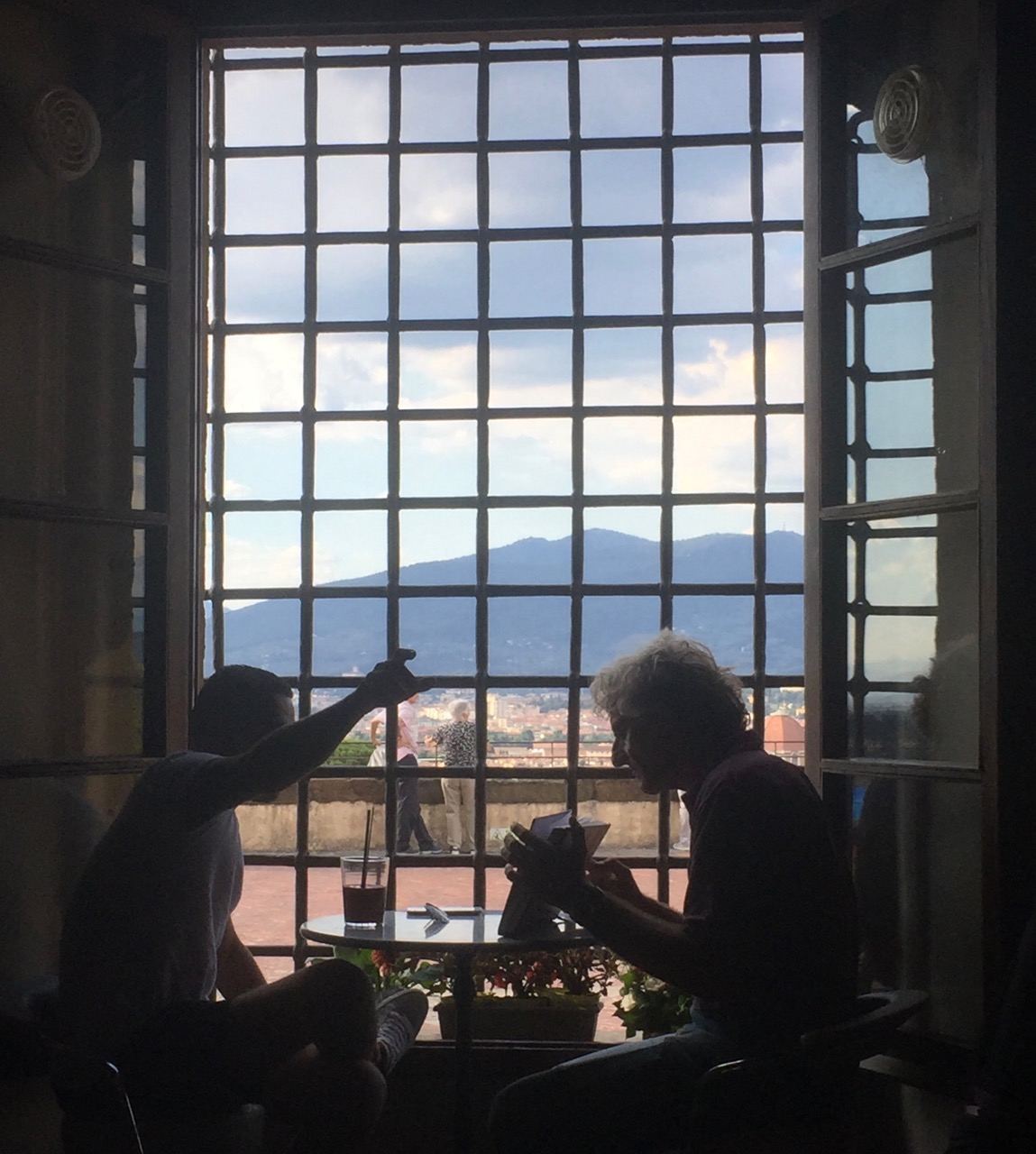 Keep a close eye on your kids here: there are some high walls and passageways and a plaque at the west entrance marks where two people fell to their death in recent years.

It’s a show of contemporary Italian sculpture (100 pieces by 12 artists) spread all over Florence, with the main part here at Forte Belvedere.

Forte Belvedere is an ideal location for outdoor sculpture – and for kids. There are indoor and outdoor spaces, a cafe, and lots of space to move around and nooks and crannies to explore.

Ytalia highlights, according to my kids.

How did it get here? How did they put it together again? What’s it made from? Look, there’s dust – like you get from real bones. What’s the pointing thing sticking out of its arm, is it meant to be there? What’s it got to do with a magnet? What does cosmic mean?

As we were looking at it (and at other people trying to catch the perfect angle) we watched one exhibition guard rush up to the other to point out some pigeon poop on it. They call someone on the walkie-talkie to get advice, but no-one seems to know what to do.

The artist, Gino de Dominicis was quite a mysterious figure and died in 2007 at the age of just 51. The sculpture is 28 metres long and weighs about 8 tons.

Yes, you can step up on these and jump off them again! That’s what the artist wants you to do. The piece is actually called “Where the stars come a little bit closer” so maybe this is a humble effort to help us all reach the stars.

Once you’ve done that a few times, you’ll probably want to go on to something else. Depending on the ages of your kids.

We had been watching the guards steer people away from other artworks so one of us was therefore especially preoccupied with these marble benches. They looked inviting to sit on and it was only when we looked down at them from high up inside the Fort, did we see people sitting on them. So if you go, make sure to sit on them.

Mummy, Mummy, come and see this one!

What is it about kids and balls? Was it the reflections in this one that made it their favourite? The broken glass, the thought that someone else had got a chance to smashing something up?

They also loved this coiled steel rope on the floor – called Continuous Infinite Present (though most of the titles didn’t mean that much to them). This reminded us of ropes along a harbour wall, but they’re not coiled up, they’re like rings.

“I’m imagining those biggest rings could be the rings of a giant. Imagine how big that giant would need to be?”

We drifted past various pieces and I let the kids stop at what interested them. Most pieces had long notes beside them in Italian and English, but they were at a pretty high level and best suited to someone with a passing knowledge of art theory.

The daughter whose thumb appears below, had been doing a lot of geometry at school all year (in Italy it’s a separate class to mathematics). I could see she was trying to measure something with her thumb but she didn’t want to explain what it was.

We talked about sculpture

What makes sculpture art? How is it different to drawing or painting? Do you make it before you know how big the exhibition space is going to be? How do you build it? 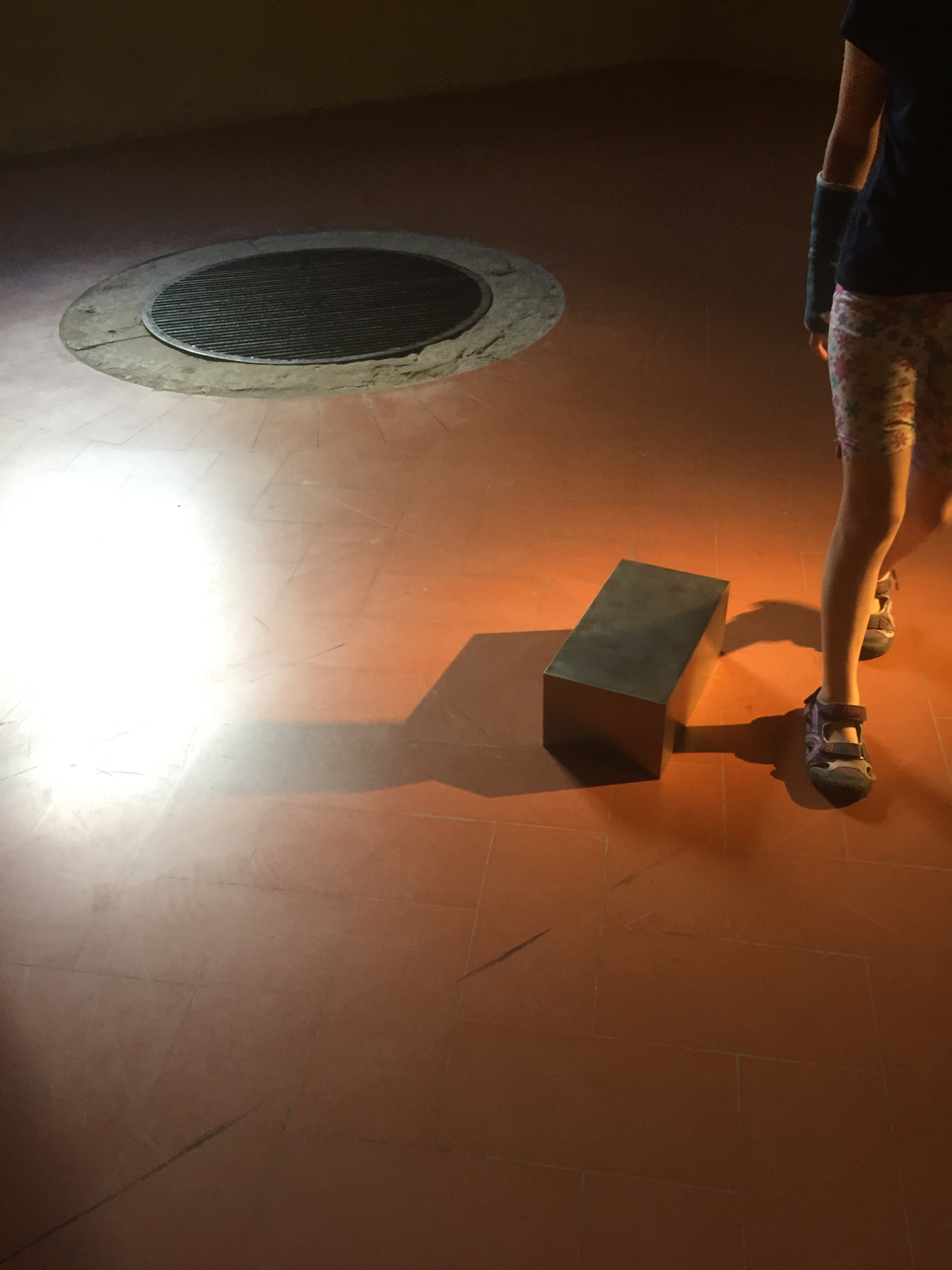 Are you meant to walk around sculpture or touch it or smell it? Actually this piece below did send out a smell as well as a sound – the sound of a frog. I had to read the information plaque to start explaining this one.

Me: Because the artist thinks a frog represents metamorphosis. Hmm, this is getting confusing.

Daughter: But I know what that means, when one thing turns into another. Like a caterpillar that turns into a butterfly.

Both: But what’s that got to do with these stones and the big pointy thing?

Me: But look at that fabulous view over to San Miniato al Monte! 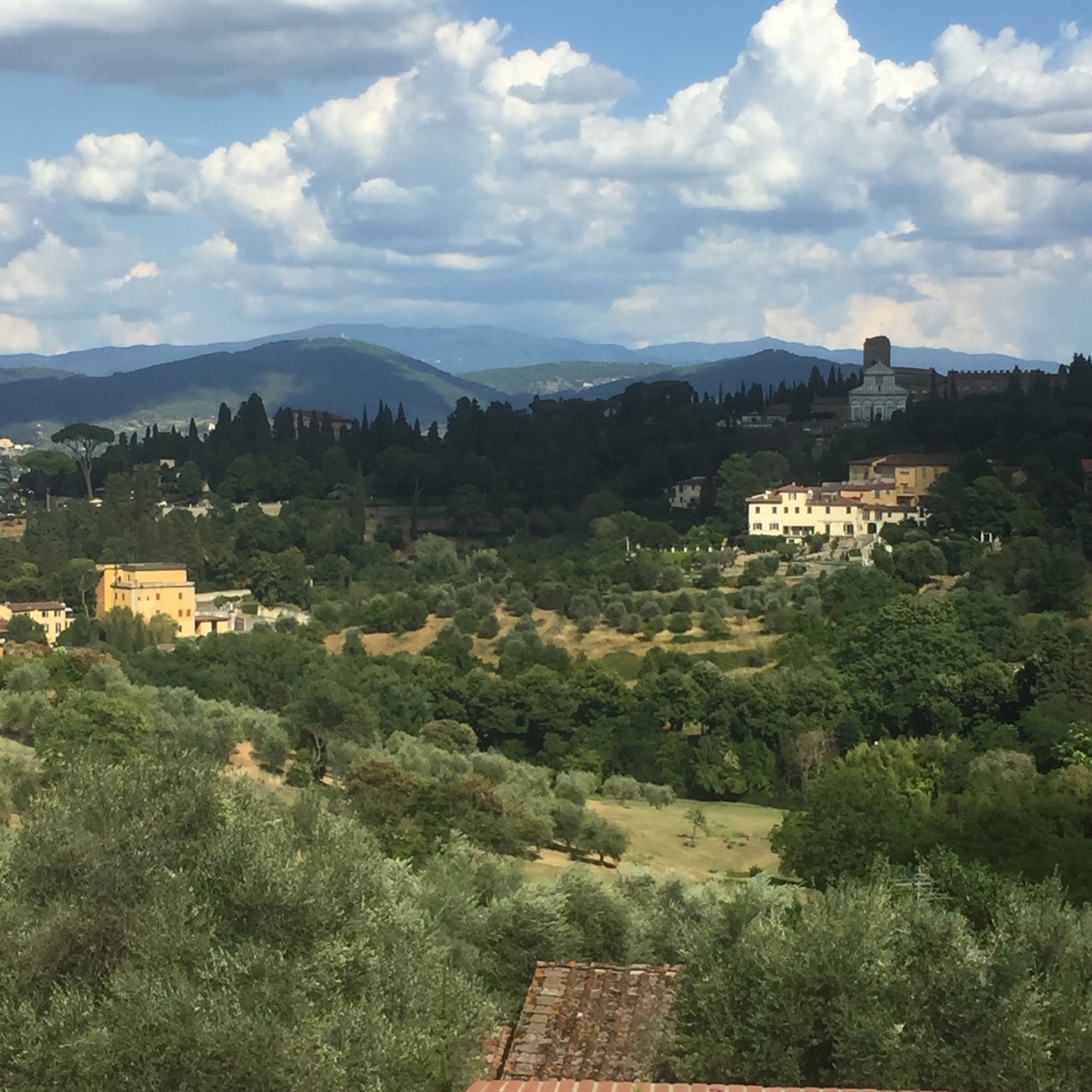 We enjoyed watching these two Frenchmen carefully examining this piece – and the guard shouting at them to leave it alone, in Italian and then in English, while they completely ignored him. Called Zephyr (like the god of wind) we liked how the stone looks so heavy though it’s all about wind and air.

This piece, a self portrait by artist Alighiero Boetti, was really popular with photographers. We talked about why it was placed right there, as if the man were walking away from the building and not towards it. Where was he going?

Because this part of the fort has the best views, Mum. 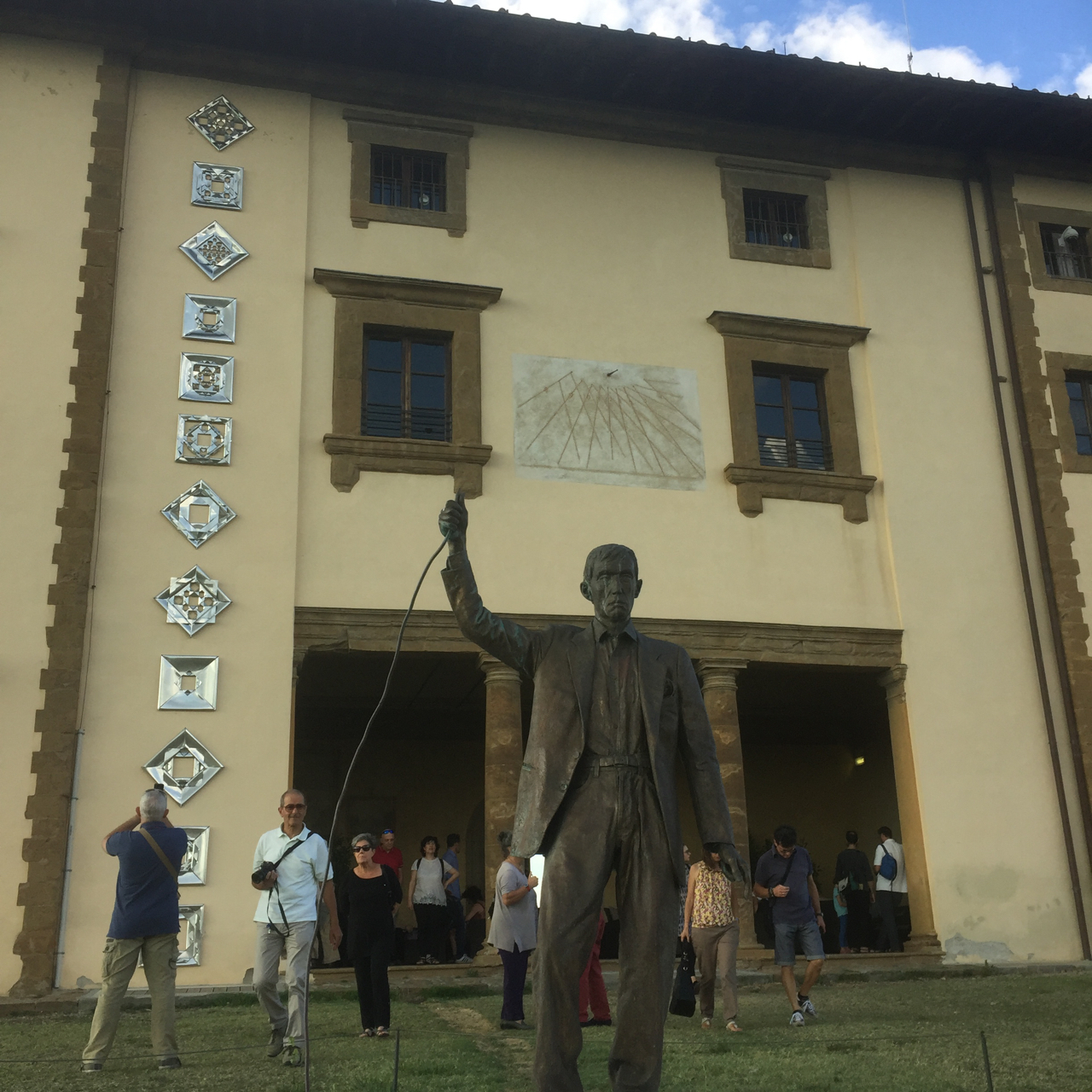 I’ve read a few comments that the 12 artists in the show are all men. 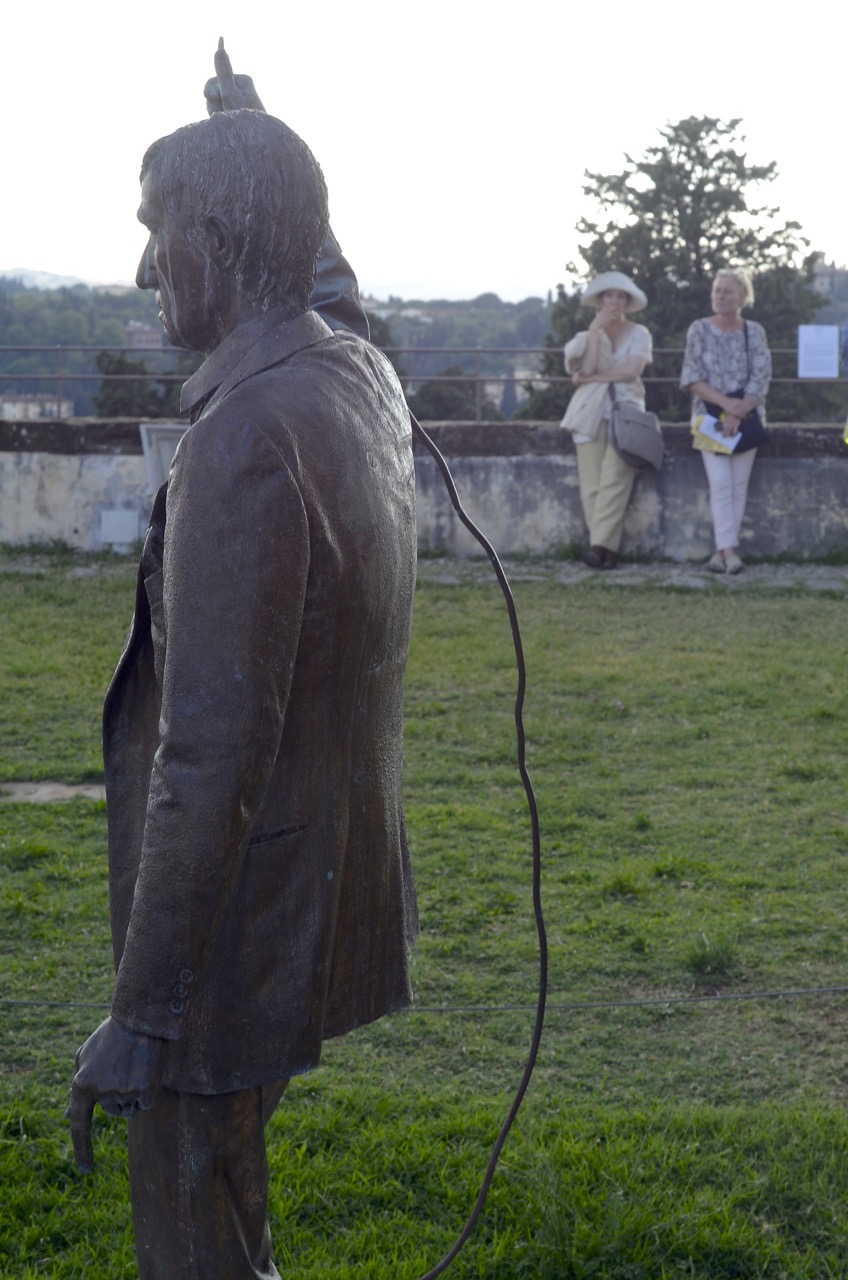 This exhibition is pure Instagram fodder. It’s hard to resist pointing a camera in and around these three-dimensional creative pieces as well as the location with its fabulous views over the city and the countryside to the south. I have to admit I’d much rather see more people look first before they point and shoot, especially kids who already spend enough time with their screens. But it’s hard to deny that the outdoor space is especially good for working on some photo techniques together – light, composition, background, people, waiting for the ideal shot. 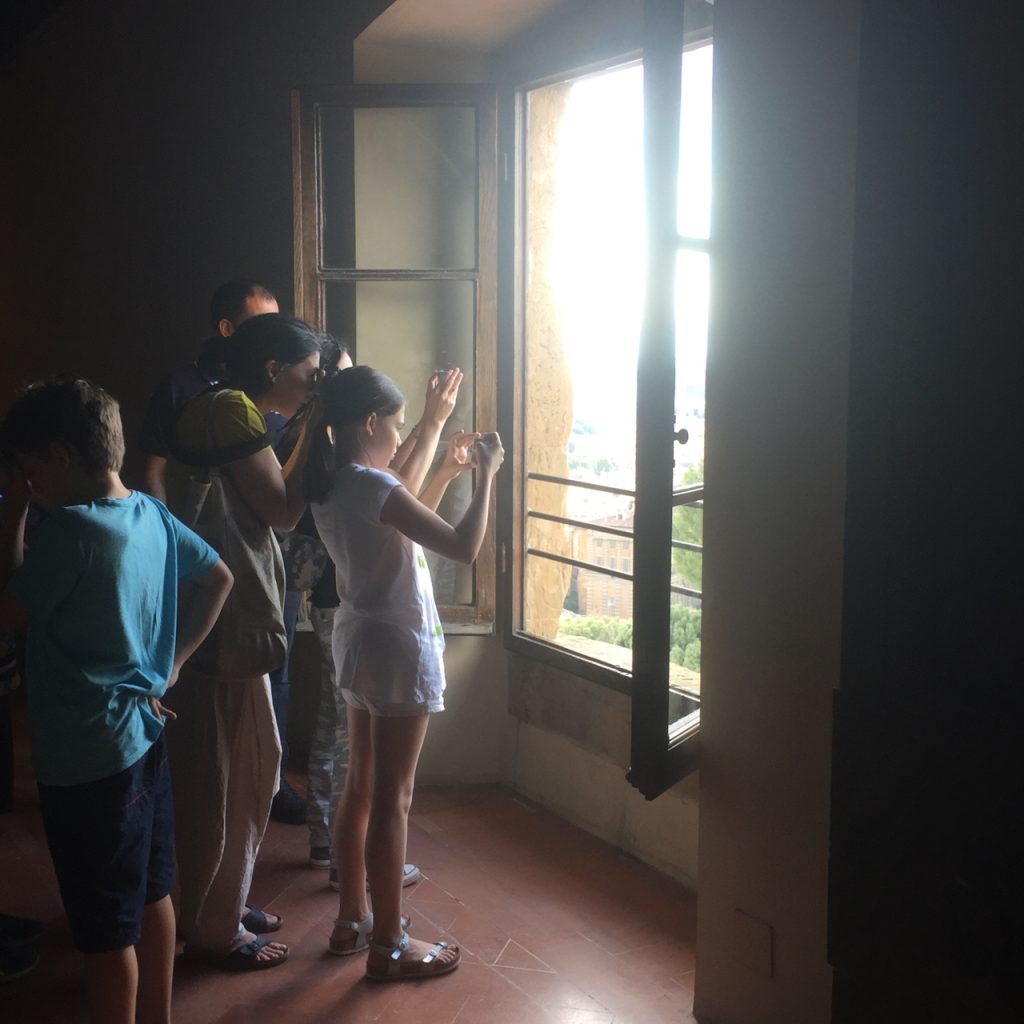 If nothing else, have fun! 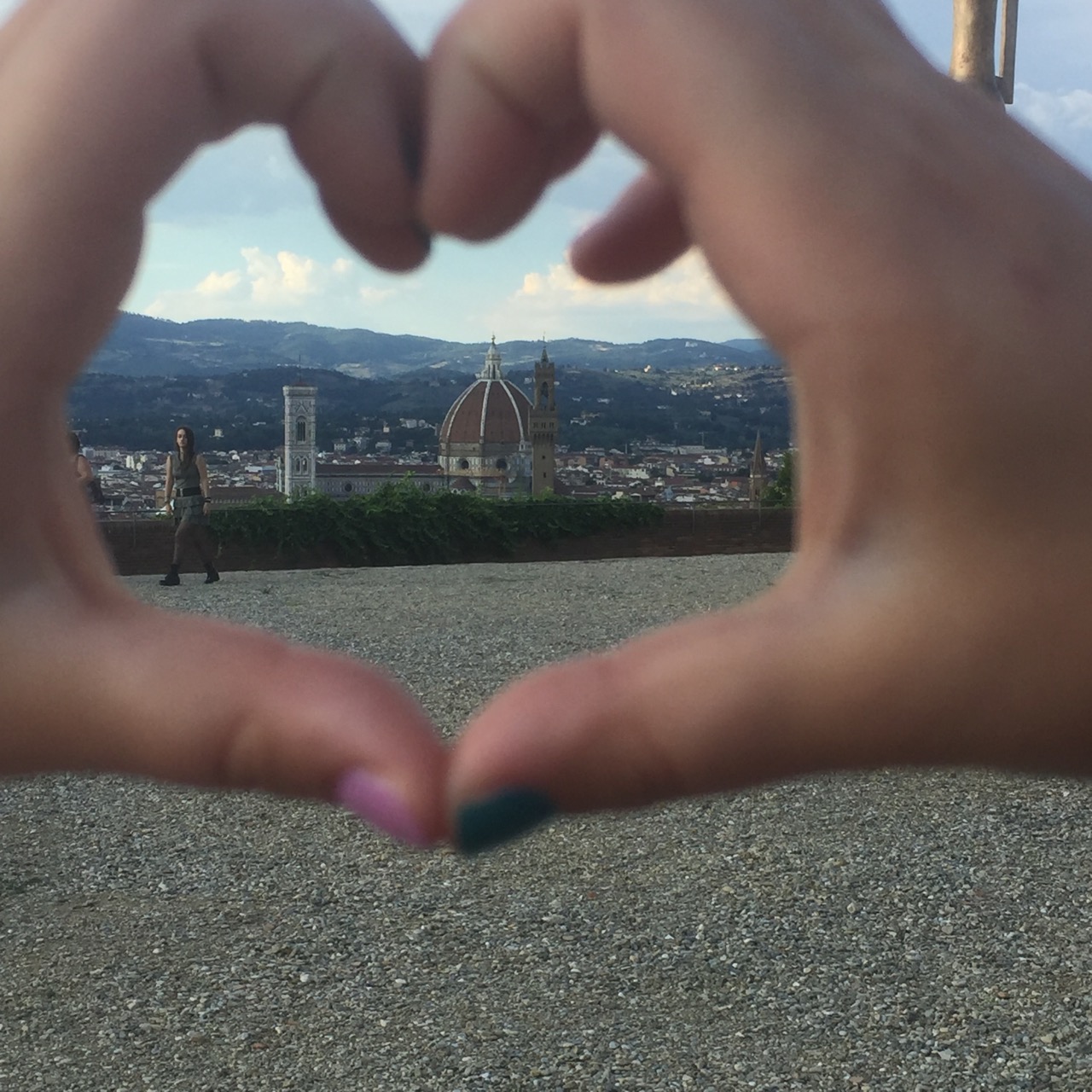