You are here: Home / Florence / The (Wet) Stones of Florence

Florence made world news this week when it was announced that the city is to start hosing down church steps with water to clear away the tourists who have a pesky habit of sitting down to eat a quick lunch.

This was big news around here, and most everyone thinks that the whole idea is ridiculous and won’t solve the problem, that after five minutes of Tuscan sun, the water will have evaporated. Even my 8 year old – when polled – was quick to point out that the city streets simply need more benches and other places where anyone (not just the nonni, or granddads) can sit in a civilised way.

Dario Nardella, the trying-hard-to-be-popular mayor, opened his “anti bivacco” campaign (from bivouac, referring to the camped-out picnickers) and declared that the steps of Santa Croce and Santa Spirito would be washed down once or twice a day, to push off the tourists. Won’t that be a waste of water, he was asked. “Well it’s part of the regular cleaning service’s supply” he replied, “and there’s no harm in giving the sacred steps a good clean while we’re at it”.

The underlying reason for this treating of tourists like cats, is that it’s not proper to sit on the church steps, a sacred place. It indicates “an increase among those who don’t respect our cultural heritage”, according to the mayor. Well, if you have 12 million people visiting each year, maybe you should take that more seriously and improve the city in many other ways. Italy’s ex-Prime Minister Matteo Renzi made a huge impact when he, as Florence’s mayor, pedestrianised a huge section of the city centre. That has been great for tourists, but the locals are still grumbling about it. 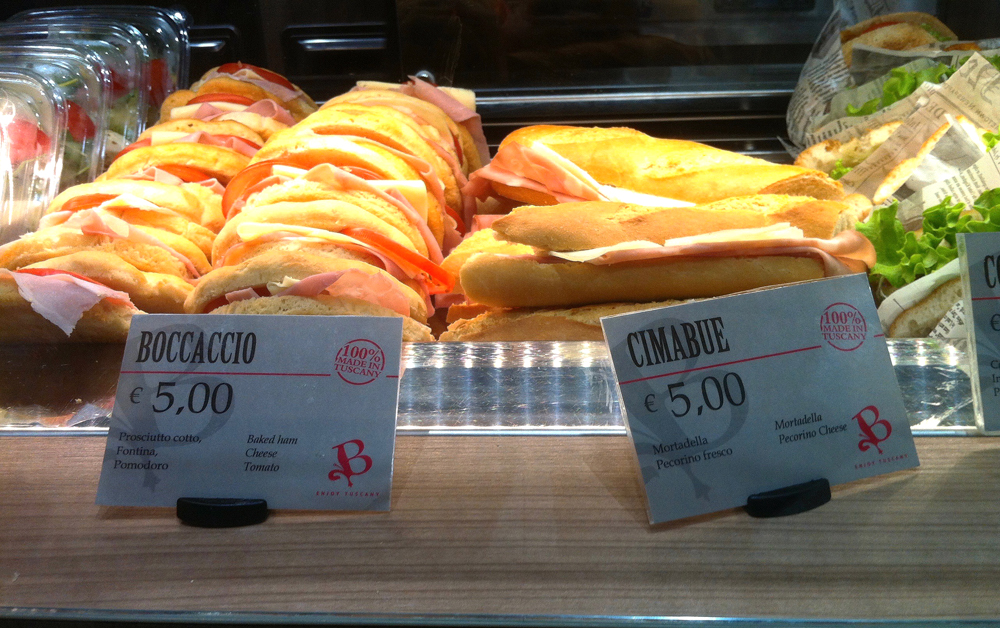 Overcrowding and rubbish in Florence are more evident than ever. But why is this picnicking a problem now? In a city that has been “welcoming” visitors to admire its amazing cultural treasures for several centuries?

Five years ago a new city law permitted the opening of a greater number of sandwich shops, kebab joints and other food options for tourists who might not have time or funds to sit down and eat properly, paving the way to more street-consumed food. 300 extra businesses have opened in that time, mostly in the historic centre and most visibly around via dei Neri which runs between the back of the Uffizi and Santa Croce and where you can find/blame the NY Times top sandwich spot all’Antico Vinaio and its many imitators.

Pause and observe the Italian street scene. With the understandable exception of ice cream, you will not see Italians walking and eating at the same time. That’s what a cafe or restaurant is for, and where, not coincidentally, you are exposed to social interaction.

The city has regretted the proliferation of the street food issue, taking measures to curb it and clean up the city, to ensure that Florence does not lose its status as a UNESCO world heritage site. They recently banned the late-night sale of alcohol from places other than cafes and restaurants, and also famously refused McDonald’s to open beside the Duomo.

A bigger question that comes to mind is – does this city actually welcome visitors? I would say not particularly well, and friends of mine (who know me to be of an overly tolerant nature) would be quicker to wax lyrical on the topic.

The good citizens of Florence have a reputation for intolerance, even within Italy. “The Parisians of Italy” someone once told me when I lived here as a student, referring to their snootiness and preference to stick to their own and be unhelpful. I don’t like to generalise, there are all sorts of people everywhere, but I’m not the only one with an opinion on this!

I’ll give you two examples.

Yesterday I was walking near the synagogue – a beautiful 19th building that doesn’t often make the top 10 tourist sites of Florence – and watched a young American couple approach the armed soldiers  out front and ask in English “is this the synagogue”. A non-soldier with them answered gruffly – “over there, number 6”, nodding to the other side of the large gate, seeming to hope they might go away. He could have also told them that it wasn’t actually open, that if you stood on tiptop and looked over the gate you would see there was a wedding going on. But he let the tourists keep walking and read on their own the ‘closed’ sign on the door, and then walk away, considering their options on how best to complain about this online.

Last week I was on a bus and a woman called from the footpath to the driver in English, “does this go to the stazione?” “No”, he barked, and took off, exuding that feeling of annoyance from someone who doesn’t want to have to start speaking English beyond the limited amount that he knows. I think that this is what often causes the gruffness you see here, the lack of confidence to speak to people as well as you might want to – as well of course as the general intolerance of being asked questions, often rudely or in a language you don’t recognise.

The bus did of course go to the station and my guilt for not intervening followed me home up the hill. I speak Italian, imperfectly, but I find I am treated with more respect than most short-term visitors. And it’s worth mentioning that almost all the school parents I know are desperate for their kids to learn better English than they ever did, they recognise its usefulness.

Aside from language issues there is much lament among tourists, and residents, about the poor quality of public facilities in Florence, like bathrooms, water fountains, benches, easy access to information, museum opening hours, children’s activities, confusing websites. Even finding your way out of the Uffizi is still as complicated as it was 20 years ago, unless it’s closing time and they’ll happily show you out.

Two days into the new hosing routine, is it working? I scanned the local media and there’s a mixed bag of opinion: it’s short-sighted, other measures are needed, it’s a waste of water, a bad image, and there are questionable rants online about handbag sellers and other “scourges” of the city. All agree that it’s daft, more benches are needed, as well as other options than the expensive cafes catering to tourists in the main piazzas.

One shop owner on via dei Neri claimed, somewhat jokingly, that the mayor had stolen his idea: he’s been throwing out buckets of water on the street for years to push off the annoying visitors sitting on the footpath. (Look closely and you’ll notice he’s selling tourist goods.)

The local sandwich makers are trying to adapt, like this sign on one door asking customers to think about where to eat – with some inventive hashtags. They’ve also written it in English too, if the visitors can figure out what the “sagras of the churches might mean”. 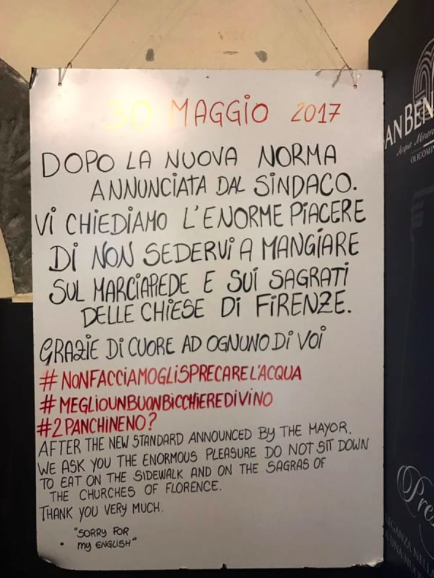 Another sandwich shop on the street has jokingly put swimming rings on display as a “counter measure”. 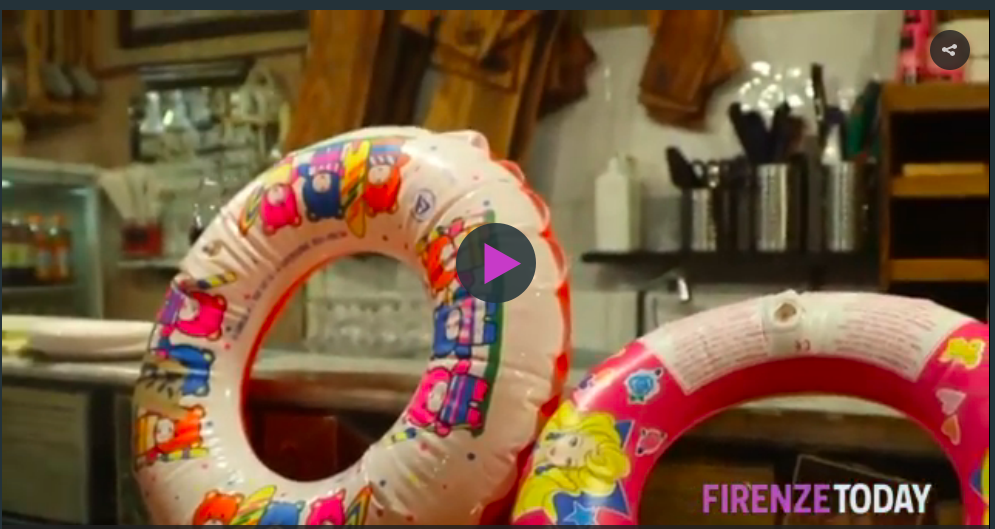 Florence – they love the tourists, but they don’t really love them.

Up where we live, away from the rubbish-strewn historic centre, I had lunch yesterday with a friend. We took out sandwiches from a local restaurant (which I will keep nameless, to avoid inviting more hordes) and we sat with others on the wall across the street, where cushions have been set out for the many daily customers. Almost all were Italian, not a tourist in sight, and as well as a full rubbish bin, there were quite a few paper wrappers and used cans strewn around the road and field over the wall. Just as at all the viewpoints up in the hills where the locals drive to in their mopeds for sunsets with friends and lovers.

At least we weren’t sitting on a church step. Then we’d be in double trouble. 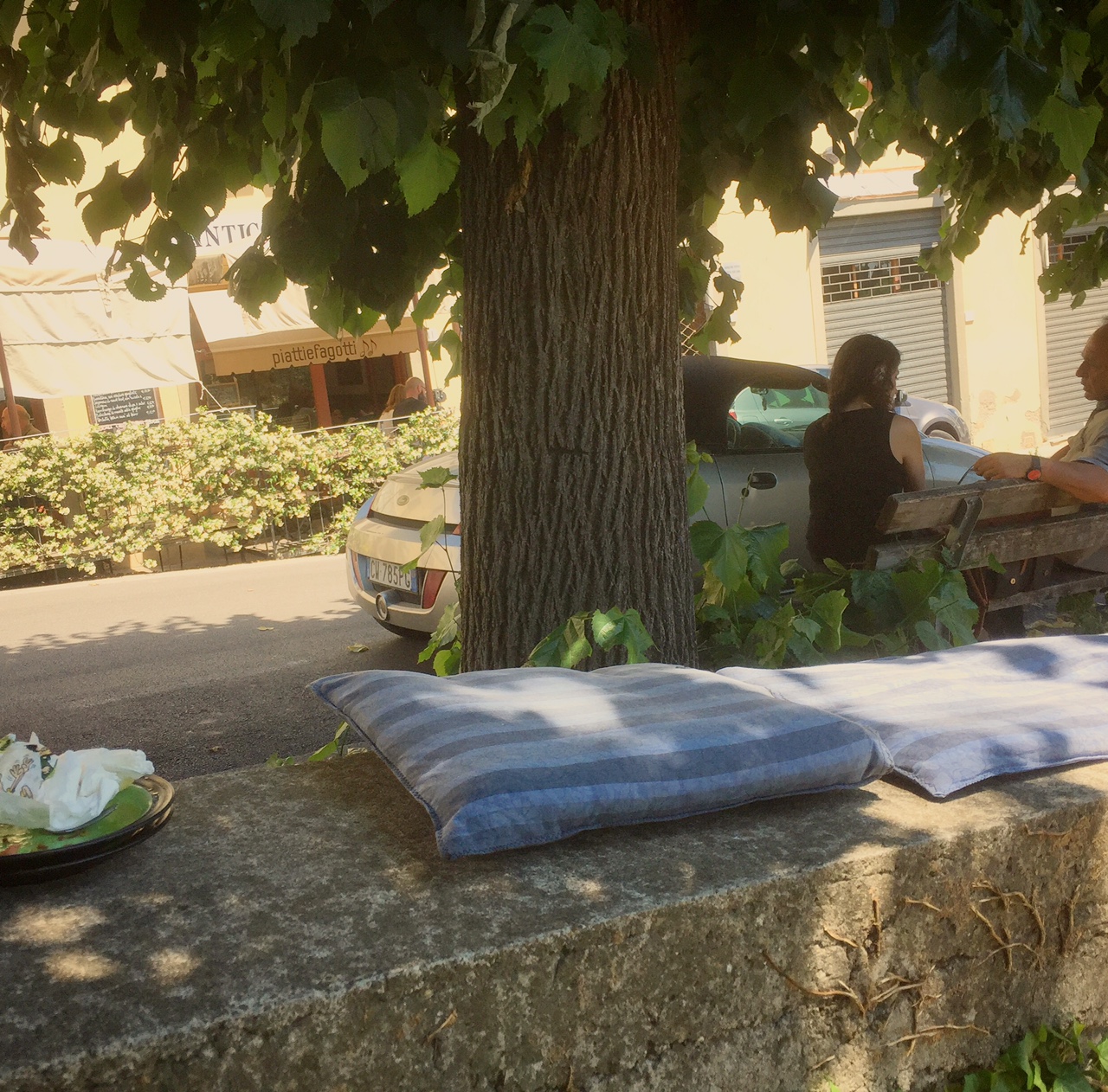 If you’re interested in more food waste issues, check out my blog post on the slow rise of doggy bags in Italy.

Here are some of the news links about this story if you’re interested.

La Nazione: The mayor watching the first spraying down